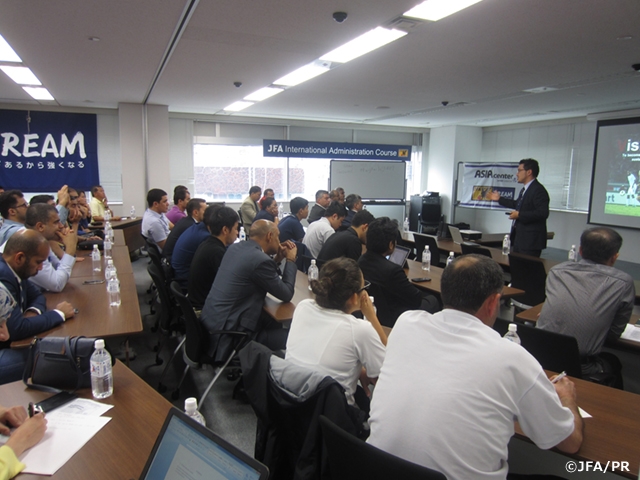 The very first ‘JFA International Administration Course’, which was co-hosted by The Japan Foundation Asia Center from Tuesday 7 to Saturday 11 June, has come to a close.

On Wednesday 8 June, the participants who watched the KIRIN CUP SOCCER 2016 at Suita City Football Stadium the day before travelled from Osaka to Tokyo. Although they unfortunately could not see Mt. Fuji due to cloud, all 42 participants were astonished by the speed of the Japanese high-tech bullet train. After arriving in Tokyo, the group visited the JAPAN FOOTBALL MUSEUM, did some sightseeing in Odaiba, and attended Official dinner. During the Official dinner, they introduced themselves and expressed their enthusiasm for the training course.

TASHIMA Kohzo, the President of the Japan Football Association, gave a welcome speech on Thursday 9 June. Then the participants attended lectures about marketing and sports management at JFA House. After the lecture at JFA house, they visited Mitsubishi Yowa Sports Club to see the facilities and practical sessions before attending a lecture about the concept of the club team. They learned about a philosophy, which was different from J Club.

The delegates attended a lecture about the JFA organisation/registration and about the J.League at JFA House on Friday 10 June. Then they moved to F.C. Tokyo Kodaira ground to learn about marketing methods and club plans of F.C. Tokyo. They also watched a practical session of their youth team. In the evening, they had supper with the instructors from Thursday and Friday to discuss in further detail about the lectures. 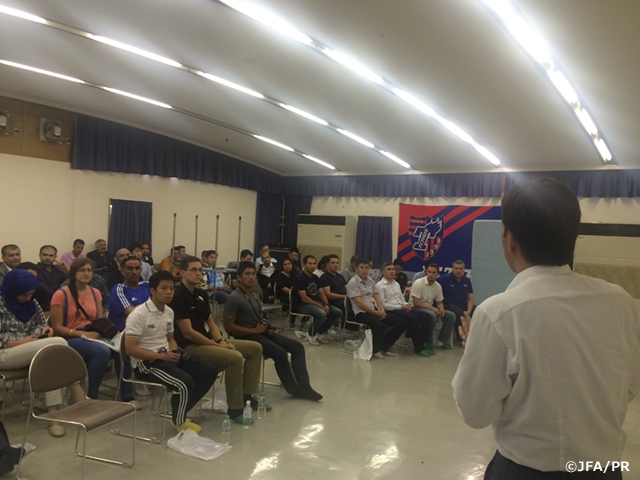 On Saturday 11 June, the last day of the course, the participants visited Saitama Stadium 2002 to see the conference space, changing room, pitch, and VIP area. They also learned about J Club preparations prior to matches, and compared them to one of the national teams’ games. Then the delegation enjoyed the match between Urawa Reds and Kashima Antlers at the Saitama Stadium 2002, feeling the excitement from the nearly 50,000 spectators.

The participants left for home on 12 June after the one-week training course.

Schedule of the Course

Bakhtiyor Mametov (Uzbekistan Football Federation)
First of all, I am grateful to the JFA for hosting this training programme. Through the course, I understood how Japan developed. I’d like to bring what I have learned back to Uzbekistan and share it with the staff of the Federation as soon as possible. I’ll sustain a good relationship with other participants, so that we can make Asia stronger.