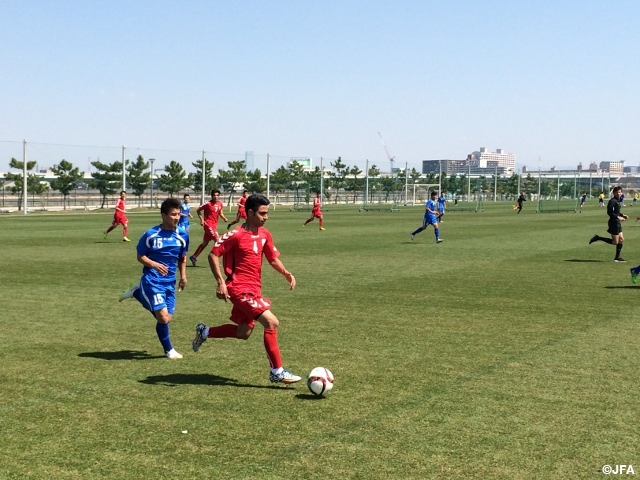 The 2nd day of this Football Exchange Programme was very aggressive under a clear blue sky. All team players have become familiar with the pitch and climate and the audience can now enjoy very aggressive play. Central Asian teams pressured Japan with their physical strengths, attacking the Japanese goal with sharp vertical passes.

All the players from the other countries are proud to play for this programme as their country’s squad players. It should be a good experience for the Japan’s players to play against this type of foreign players. In this occasion, Vice President TASHIMA Kohzo, General Secretary HARA Hiromi, and Technical Committee Director YAMAGUCHI Takafumi of JFA visited the venue and expressed a warm welcome to the Central Asian teams. 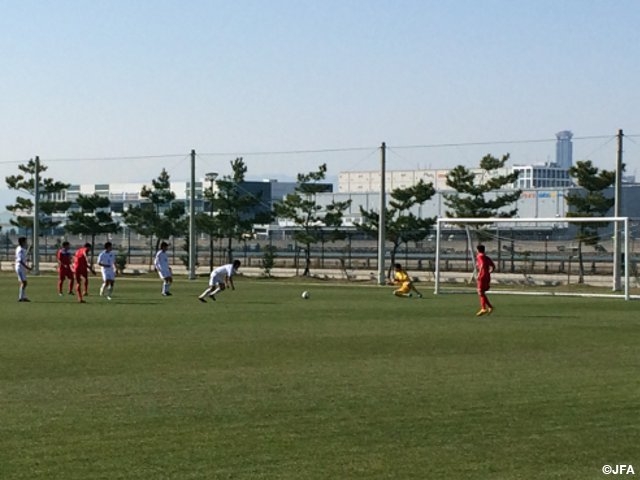 KOHKAN ZABIHOLLAH SAMAD (U-15 Iran Squad Player)
We played against Japan today, and we could keep our high level of play by understanding our Head Coach’s direction. We have gotten familiar with the climate here whereas earlier we could not play satisfactory against the U-15 Afghanistan National Team yesterday due to jet lag and tiredness. We could make good movement and nice play today. We know that Japan is most well-organized team and we could beat them today; that makes me feel that we are approaching what they have. All teams of Group B are strong, so we think that all of us, including Head Coach, need to unite well as a team to get the victory. We will do our best. This is also a very precious experience for me to know Japanese culture and people. I also learned a lot from the well prepared management for this event.

MELISBEKOV AZAMAT (U-15 Kyrgyz Squad Player)
Reflecting on the 4 matches we had (25 March: vs U-15 Turkmenistan, and vs FC Tokyo U-15 Fukagawa, and 26 March: vs U-15 Tajikistan and vs JFA Academy U-15), I think all of us tried our best to stay highly motivated. Japan has a high level of agility and systematic combination. For this football event, we have had a lot of training and we could show our advantages such as high level of game control once we got the ball, and positioning during the match against JFA Academy. However, we still have many things to improve, so we just want to learn Japan’s good combination play and hope we can control the match next time. This is my first visit to Japan, and I am very happy to be here. As a squad player I have visited many countries before, but for me Japan is special because the people welcome us so warmly and it’s very clean and a wonderful environment.

TAMURA Yujiro（JFA Academy Fukushima/ Kumamoto Uki U-15）
The most important thing I found after these 2 days is that the players from other countries have such a different level of motivation to the matches since they feel a lot responsible as national squad players even at their age. For example, in the first match our opponents got 3 goals back making it 4-3, after we got 4 goals. Today I felt their strong motivation to win the match by their persistent play such as trying to stop our shots until the very end and their strengths at very challenging moments. We have been inspired by their motivation very much. Time is quite limited, but I just want to make this Exchange Program very effective and also to learn a lot not only as a team but also as a player. 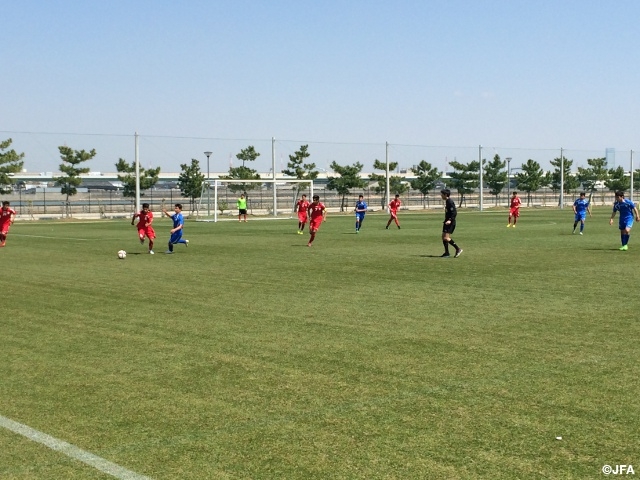 ※Japan-Central Asia U-15 Football Exchange Program
It is a youth football exchange tournament inviting teams from Japan and the Central Asia region. As part of the international contribution programs, ''SPORT FOR TOMORROW'', which is led by the Japanese government, the event is supported by the Japan Sport Council.
More information

Entry teams of the programme