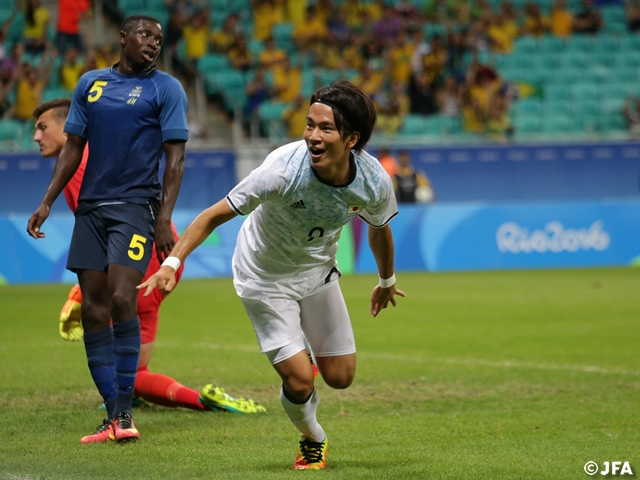 Japan’s Olympic squad had their last match of the Group B of the Rio de Janeiro Olympics against Sweden on Wednesday 10 August. Japan scored one goal by substitute midfielder YAJIMA Shinya (Fagiano Okayama) and beat Sweden 1-0, however Japan could not qualify for the quarterfinal, having one point less than second-placed Colombia.

Colombia advanced beating Nigeria 2-0 with 5 points. Nigeria had already qualified for the final stage as the top team with 6 points after two matches.

Japan changed 3 starters from the second match against Colombia: midfielders OHSHIMA Ryota (Kawasaki Frontale) and MINAMINO Takumi (Salzburg/Austria), both lead the team’s offense with excellent combination in the second half of the previous match, and defender KAMEKAWA Masashi (Avispa Fukuoka), who had drastically improved the offence after being substituted in the second match. Kamekawa started as a left side back this time. Japan used a 4-4-2 formation putting two forwards KOHROGI Shinzoh (Urawa Reds), who converted a penalty in the first match, and ASANO Takuma (Arsenal FC/England), who scored in the previous 2 matches.

From the beginning, Japan built up their offence by moving the ball around and tried to make deep passes to the front. However, Sweden’s defender UNE LARSSON Jacob, who was selected instead of injured defender NILSSON Joakim defended firmly near their goal. With limited scoring opportunies, Japan got a corner kick in the 19th minute and Minamino crossed the ball to Ohshima, but his direct shot went past the goal post.

The biggest chance came in the 32nd minute; Kohrogi smashed a shot with his left foot after receiving the ball from Minamino, only to be denied by the opponents’ goalkeeper. Gaining a corner from this attempt, Minamino crossed the ball from the right side and defender UEDA Naomichi (Kashima Antlers) headed the ball towards the goal, but it was blocked again by the goalkeeper. 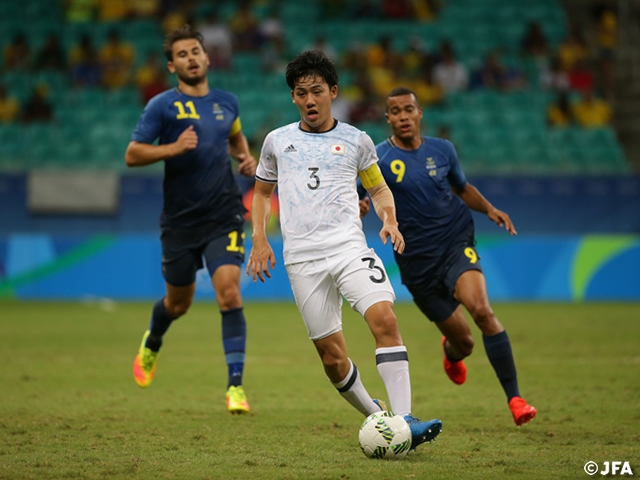 Sweden, on the other hand, centred their offence around over-aged forward player AJDAREVIC Astrit. In the 30th minute, midfielder FRANSSON Alexander attempted a shot, but it was unsuccessful. In addition, right before the end of first half, Ajdarevic fired a free kick from the right side, but Japan’s goalkeeper NAKAMURA Kosuke and other defenders responded well to deny it.

After the scoreless first half, Japan started to take early initiative, attacking aggressively from the beginning of the second half. They created chances by targeting the space behind the opponents’ defenders. In the 56th minute, Kohrogi took another shot from the left side after receiving a cross from Asano, but it went over the cross bar.

In the 60th minute, Japan substituted Asano for forward SUZUKI Musashi (Albirex Niigata). And, in the 63rd minute, the substitution almost payed off. Suzuki took a shot from a corner, but his attempt was stopped by the goalkeeper.

The opening goal was scored in the 65th minute; Japan’s midfielder OHSHIMA Ryota (Kawasaki Frontale) dribbled up the left wing and passed it to the other side. As Yajima said after the match “I was ready to jump at crosses,” he connected with the cross in the front of the goal and scored the opener with his right foot.

Japan continued their fierce attack. Three minutes after the goal, the header by defender SHIOTANI Tsukasa (Sanfrecce Hiroshima) hit the opponents’ cross bar. Two minutes later, another header attempt by Yajima from a cross by Kamekawa from the left side could not find the net. In the 87th minute, midfielder NAKAJIMA Shoya (F.C. Tokyo), after receiving a deep pass, fired a shot but missed the target. Japan won the match 1-0.

Japan’s Olympic squad ended their Olympics in third place of the Group B with 1 win, 1 draw, and 1 defeat. 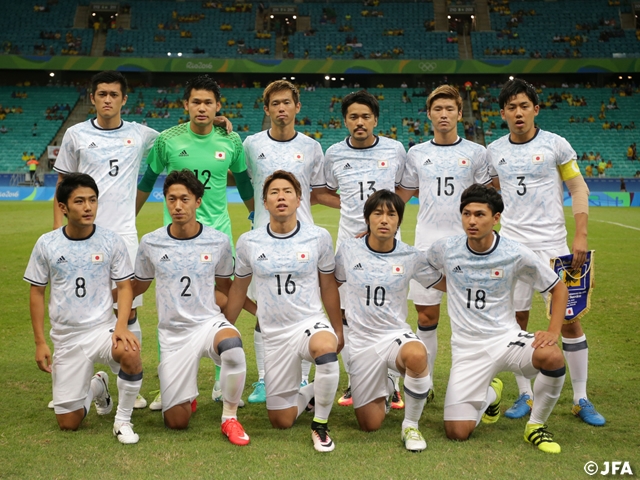 TEGURAMORI Makoto, Coach
The qualification to the next round was dependent on the result of the other match, but I was expecting that ‘positive thing’ might happen if we could win this match. It is such a shame and difficult to accept the fact that we have to leave the competition now, while observing the steady improvement in the team. It is also very frustrating that we won’t be able to show Japan’s true potential demonstrating their resiliency and persistency in the up-coming competition with few days’ rest between matches. We will analyse what was missing later, at this moment, I just feel we didn’t have much luck in the first and the second match of this Olympics.

Depending on approach, players can grow up significantly. I feel that Japan’s way of controlling the ball and subsequently eluding the opponents’ challenge and turning them into effective offensive plays improved drastically experiencing this tournament. I felt that this young group of players, especially if they can further develop their strength, is capable of competing against world-class teams. Considering this, it is such a shame that they have to leave the Olympics now after winning the match. To the players, I expressed my gratitude for being able to coach the Olympics. Lacking international experience, this was a great chance for the players to gain confidence competing against the world. Also, as a coach, participating in the Olympics was an excellent learning opportunity. I sincerely appreciate the much needed experience provided to both of us. I expect them to be called up to the national team in the future.

MF #9  YAJIMA Shinya (Fagiano Okayama)
The only thing I needed to do was to make a finishing touch to an excellent cross from Ohshima. When I scored I was really happy, but the moment of joy ended after realising that we couldn’t qualify for the next round. At the same time, I felt frustrated (and regretted) that we could have performed better in the previous two matches. I learned that the first match is very important. As a player I will keep working hard to grow up in the future, thus not wasting this experience.

FW #13  KOHROGI Shinzoh (Urawa Reds)
Day by day our team got better. So my honest feeling is that I wanted play more with them. I need to keep working hard, reminding myself of the ‘frustrating yet encouraging’ experience, back to my club in hope that I can play again with this teammates in the national squad. I enjoyed playing as an over-aged player and we did our best in these 3 matches. It is a shame that our efforts didn’t bring about the good result for us.

FW #16  ASANO Takuma (Arsenal FC)
We should have scored a tie-breaker in the previous match. I couldn’t score it regardless of the countless chances I had. This put the team in a difficult situation to qualify for the next round. This is an issue I need to work on. In terms of challenging in the world, what we have experienced in this tournament will help me without any doubt. I want to be the player who will be called up regularly to the national team and attain good results.

MF #3  ENDO Wataru (Urawa Reds)
After knowing the result that we cannot go through, I could no longer repress my frustration. I wanted to play more matches. It was inconceivable that we conceded 5 goals in the first match. In addition, it was regrettable that we couldn’t win the one against Colombia. Even only a small gap can be the gap that makes the difference when competing against the world-class teams. We need to accept the result and move on.

DF #5  UEDA Naomichi (Kashima Antlers)
I really wanted to keep a clean sheet in this last match. It is a sheer disappointment that we have to leave the Olympics now. We still have regrets from the first match allowing the opponents to score many goals. However, I have a stronger motivation to be selected as a national team player and earn the chance to avenge against the world-class teams. I understand that I need to keep working hard and improve significantly to get there.

TASHIMA Kohzo, the President of the Japan Football Association
I would like to express my gratitude to the coaches and trainers who lead the team, all the team staffs, and all the clubs of J. League and foreign football leagues for allowing their players to participate in this Olympics during or just prior to their league seasons. Unfortunately, Japan couldn’t go through to the final round, but I am encouraged that they finished the tournament with a win. In addition, they overcame adversities and fought their best until the very end. I hope that they learn and absorb many things from this experience and continue to improve as a player in their respective clubs, aspiring to become the squad member of the national team in the future.