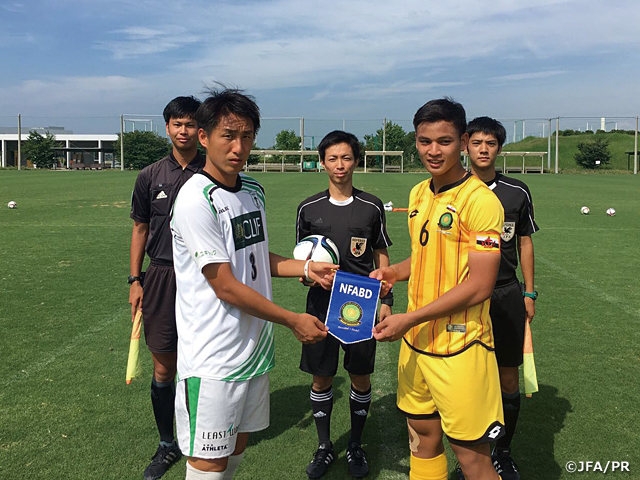 The camp was aimed at strengthening the team for the AFF U-18 Youth Championship in Myanmar which took place from Monday 4 September, and 23 players and 5 staff members arrived in Japan to play four training matches including two against the J.League Academy Teams. Additionally, they watched two J.League games during their stay. Aside from training and activities relating to football, the team experienced Zen meditation in Nara City and enjoyed sightseeing in Shinsaibashi in Osaka. 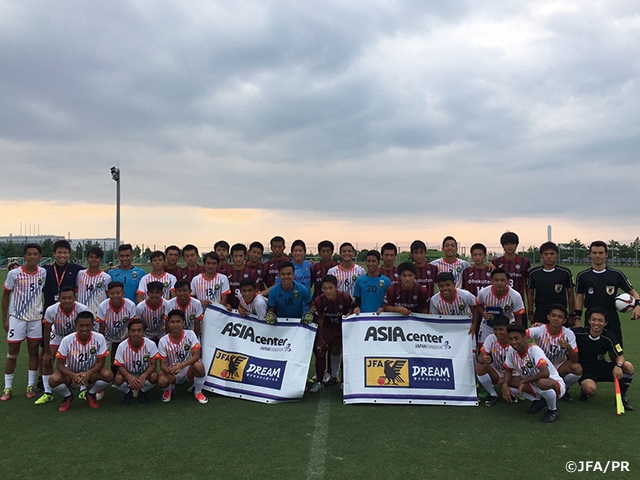 FUJIWARA Takao,  Coach
We are grateful that we could hold a training camp at a wonderful training centre, J-GREEN Sakai, and, at the same time, we would like to thank all the people who supported out camp. The main objective of this camp is to make a good preparation for the international tournament in Myanmar, and we were given a chance to have training matches against excellent opponents. Scheduling a match against quality teams in Brunei is difficult and seldom do we see a single error that results in conceding a goal as well. As a consequence, it is difficult to instil the concept ‘every play matters’ to the players.

Our players were quite surprised to see that Japanese players of the same age group have excellent techniques and pace. Moreover, they do not have many occasions to compare themselves to foreign players of same ages as well. It must have been a scintillating experience to know that are many wonderful football players in the world. I believe that this experience by itself was an important achievement of the camp. In fact, I have noticed that some of our players were stimulated by them and their attitude and work ethics towards football have changed during the camp. Aside from football training, I was also delighted to see our players get surprised by observing some of the differences between the more modern city of Osaka and their home country during shopping and sightseeing as well. I felt glad that I was able to bring them to Japan for training. I have no doubt that it has been a wonderful experience for them as well.

Hj Faizalani Hj Abd Ghani, Assistant Coach
I was impressed by the warm hospitality of Japanese people. Needless to say about the excellent quality of training facilities here, all the staff were very helpful and kind to us as well. I am grateful that Halal food was catered in addition to medical staff attending to players who were not feeling well individually. We learned a lot from playing against the U-18 Japanese players with excellent footwork as well as their relentless effort in putting quick pressure on the opponents in defence. I believe that it was a wonderful experience to visit Nara and learn about Japanese culture as well. I would certainly hope to revisit Japan someday.

Muhammad Wafi Bin Aminuddin, (Captain)
I am very glad I came to Japan. We had an excellent camp by having our training at the wonderful facilities of J-GREEN Sakai and on their natural turf. The quality of our opponents in practice matches was excellent as well. Unfortunately, we couldn’t win any of them, but still learned a lot from playing against them. We had a chance to watch J.League matches in live and enjoyed the exciting games that had plenty of actions as well. It was my first time to experience Zen meditation and I felt a little awkward at the beginning. However, I was able to find inner peace at the end and it has become a precious experience as well.

Ak.Mohd Amirul Hakim Bin Pg Hj Zulkarnain
I was surprised to see how high the quality of Japanese players was. Excellent footwork and strong physicality as well as their ability to connect quick passes in tight spaces were some of the areas that I thought can be helpful in improving our game as well. Everyone in the Japanese squad played with confidence. By communicating to one another frequently they hardly made any errors during the game as well. Additionally, we had a difficult time defending against direct plays that were often used by the Japanese teams and swift attacks as we hardly come cross that level of attacking pace in Brunei. We also had a chance to watch two J.league matches in which we consider their league to be one of the best in Asia. Observing these quality matches were wonderful learning experience for us as well. Aside from playing football, when we went shopping in Osaka, I was amazed by the modern landscape of tall and contemporary buildings that cannot be seen in Brunei as well. 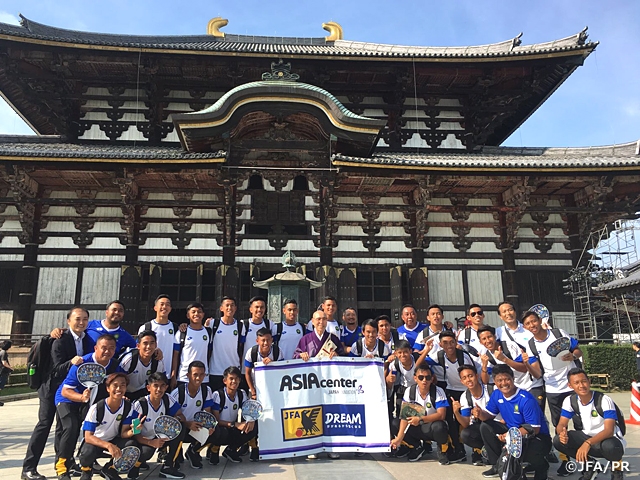