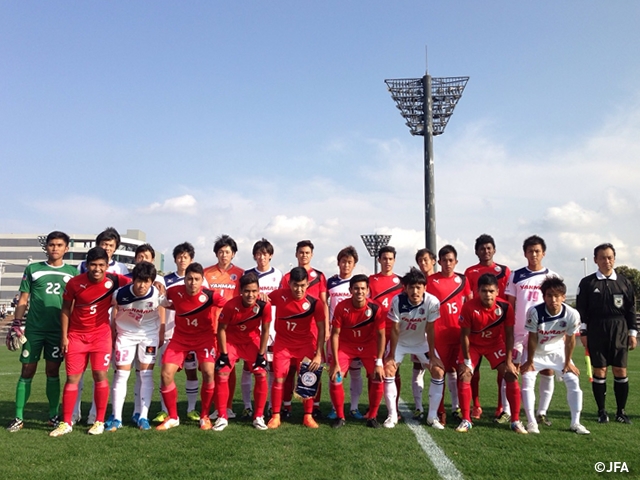 The U-22 Philippines national team held a two-week training camp at J-GREEN Sakai.
Twenty three players from Philippines participated in this training. Jim Fraser, the former goalkeeper, who played in the World Cup for the Australia national team, leads the team as the head coach. The players were impressed with the environment including the facilities and the pitches, where they had two practice sessions everyday. As half of the players joined the national team for the first time at this camp, in the meeting the head coach told the players to express their opinions freely, focusing on the better communication within the team. Unfortunately, they could not win any of the three friendlies against Japanese teams, but both the coach and the players had a good experience and showed their willingness for the future.

This training camp is part of the arts and cultural exchange programme for ASEAN-member countries, which is supported by the Japan Foundation Asia Center.

The Japan Foundation Asia Center creates opportunities to exchange art and culture between Japan and other Asian countries under the slogan of ‘WA Project: Toward Interactive Asia.

The players had a chance to learn some Japanese history and culture, visiting Osaka Castle and experiencing playing Japanese drums. The Cambodia team, who were also holding their training camp at J-GREEN Sakai, participated in the Japanese drum experience. The players enjoyed the arts and cultural exchange among Philippines, Cambodia and Japan. They had a successful training camp, not only having practice matches but also experiencing many things, including cultural exchanges.

Jefferson Chen, Manager
I believe this training camp was a meaningful time especially for the players, who are new to this team. I saw many players showed their skills more in this match than the previous one. I’m pleased that they played well. I look forward to the next match.

Jim Fraser, Head Coach
The opponent, Cerezo Osaka, was an experienced and well-organised team. Although I’m not happy with the score, which was 5-1, I’m satisfied with the players’ game. It was good practice before the Olympics. The Philippines have to improve both technically and physically. Both the staff and the facilities, including the pitches, at this camp were all excellent and we enjoyed the meals. I appreciate that the JFA gave us such a good opportunity.

Paolo Salenga
The opponent, Cerezo Osaka, who we played against in our second game, was swift, skilled and organised. I don’t think we’re organised yet as a team compared to the opponent. I’d like to practice more, so that we can have better combinations among the players.

Jaime Vicenzo Cheng, Captain
We had wonderful practice sessions, with excellent facilities and staff at this camp.