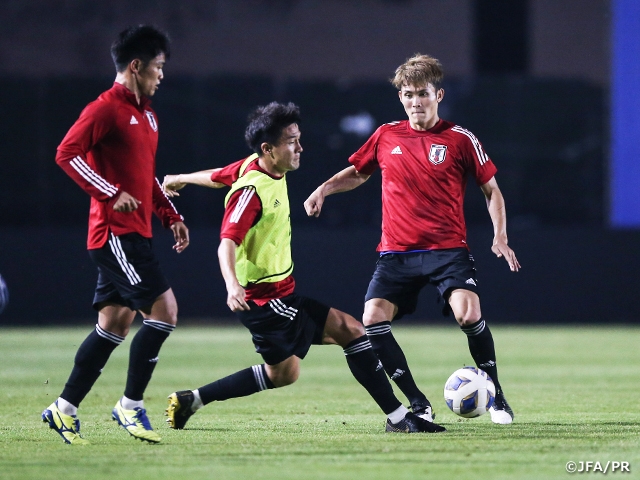 One day following their second group stage match of the AFC U-23 Championship Thailand 2020 against the U-23 Syria National Team, the U-23 Japan National Team resumed their trainings in Bangkok on Monday 13 January.

While the players who started in the match against Syria, along with KOJIMA Ryosuke (Albirex Niigata), remained at the hotel to recover their fitness, the remaining players showed up at the training ground to conduct a training session.

The session started with the players going through their warmup routines, followed by passing, possession, and shooting drills in various formats to go over their combinations. The players displayed great enthusiasm in a session that lasted about an hour and a half. 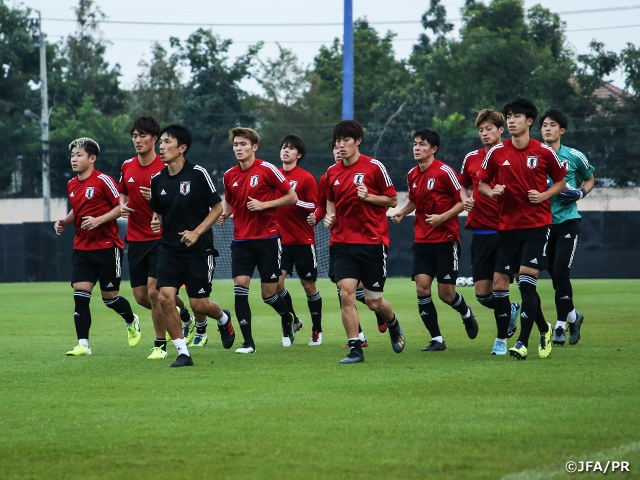 In addition to their regular team meeting, the players held a meeting by themselves to share their opinions on what they must do to improve the current status of the U-23 Japan National Team.

After conceding a late goal in both matches, Japan lost their first two group stage matches against Saudi Arabia and Syria. With the two losses, Japan is eliminated from the competition ahead of their third group stage match against Qatar. However, ENDO Keita (Yokohama F・Marinos) shared his aspiration ahead of their next match, “There is no such thing as a throw away match. We will do our best to prepare ourselves for this next match.” TANI Kosei (Shonan Bellmare) also mentioned his take on their next match, “We cannot waste any match. Our team will be tested when we face the Qatari side who will come out with a strong intention to win the match.”

The U-23 Japan National Team will seek to earn their first win of this competition when they face the U-23 Qatar National Team at Rajamangala Stadium on Wednesday 15 January. The match is scheduled to kick-off at 20:15 (22:15 Japan time).

GK #23 TANI Kosei (Shonan Bellmare)
We still have one more match to play, so we are resetting our mindset towards the match. We have told each other that we must not waste the bitter experience we suffered in our first two matches. We will unite as a team to earn a victory in our third match.

MF #5 SUGIOKA Daiki (Kashima Antlers)
The fact that we are eliminated from the competition shows that we have plenty of room for improvements. There are many factors that came into the equation, as our opponents were fighting for their spot into the Olympic Games, the pitch condition, and the hot climate, but even with those factors considered, we simply didn’t have enough strengths to win through this competition. I hope to become a player who can make plays that can help the team win matches.

MF #11 ENDO Keita (Yokohama F・Marinos)
There is no such thing as a throw away match, so we will do our best to prepare ourselves for this next match. I have played in neither of our first two matches, and I have been visualising how I would play on the pitch if I was given the opportunity. The fact that I was kept on the bench for the first two matches describes exactly where I stand in this team right now, so I must work even harder to earn my spot into the starting line-up. 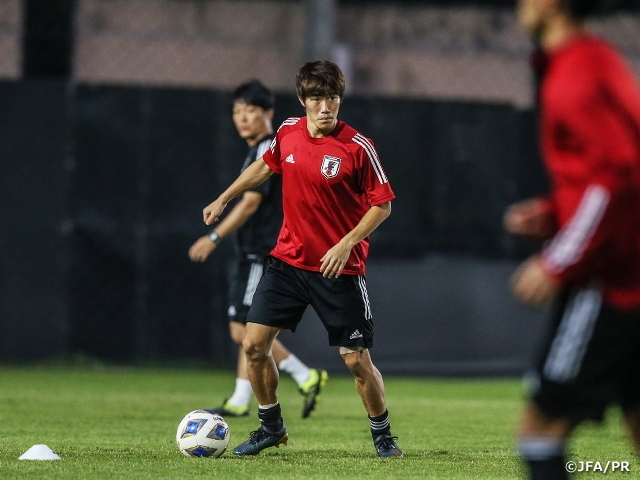