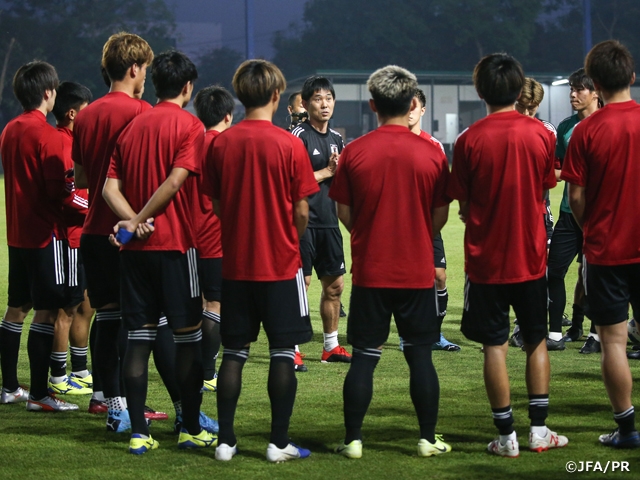 On Saturday 11 January, the U-23 Japan National Team held their final preparation session ahead of their second group stage match of the AFC U-23 Championship Thailand 2020 against the U-23 Syria National Team. 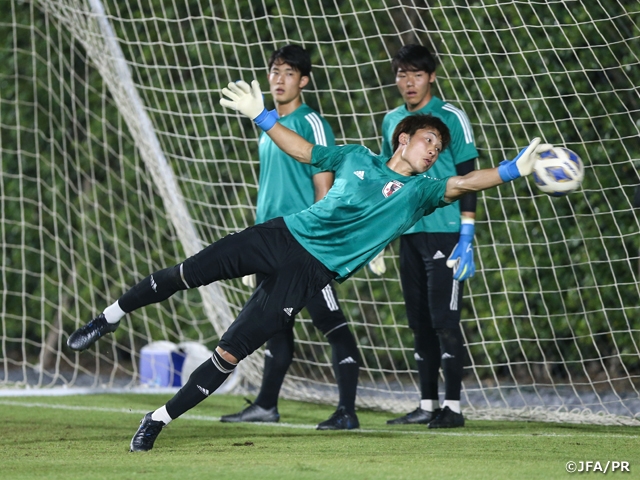 One day ahead of their match, coach MORIYASU Hajime mentioned, “I will monitor the players’ conditions to determine the starting line-up.” The coach also commented on his approach, “Our opponent will keep their plays simple, so we must make sure to win the one-on-one battles and win the second balls. We will focus on our fundamentals in order to control the match in our favour.”

Syria has won through the AFC U-23 Championship Thailand 2020 qualification round in March, where they played against Kyrgyz Republic, Kuwait, and Jordan. Since qualifying for the championship, the team has drawn 2-2 against the U-23 Qatar National Team in their first match. Set-pieces will play a key role in their game, as coach Moriyasu mentioned, “We must try not to give away set-pieces. Even if we do give them set-pieces, we must compete for the ball in the central area, give no free space and stay determined to win the loose ball.” 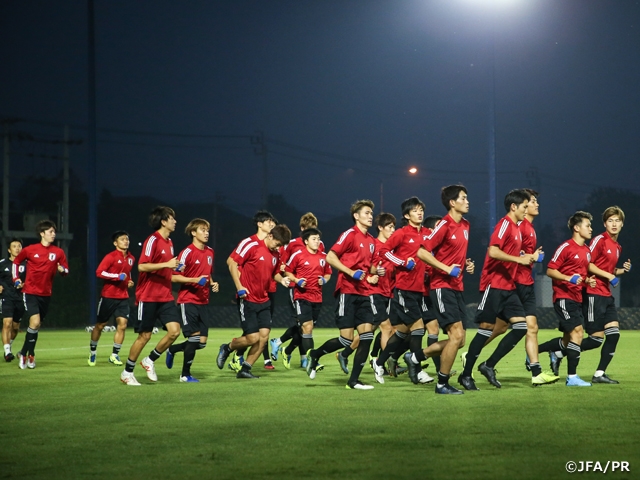 MORIYASU Hajime, Coach
Following our loss to Saudi Arabia, we have reviewed and analysed our performance, so that we can improve ourselves in the match against Syria. In terms of offence, we must show more aggression and make dynamic plays. In defence, we must play more persistently and try not to give away too much space to our opponents. We hope to implement the experience we gained in the first match to showcase a better performance.

DF #17 MACHIDA Koki (Kashima Antlers)
Syria has great physical strengths, so it is important that we don’t back down in the fifty-fifty situations and the aerial battles. In close matchups in Asia, set-pieces will play a key role, both offensively and defensively. If we can take advantage of the set-pieces, we can gain great momentum, so we will seek to score goals from them. The players who didn’t feature the first match are all craving to play, so we hope to showcase a positive result if we are given the opportunity to play.

MF #19 HATATE Reo (Juntendo University)
The team needs me to score goals, so I will focus on hitting the target. Although I was able to receive the ball and make turns in our match against Saudi Arabia, I felt the need to be more aggressive in the attacking third. We are in a must win situation, so I will give my best efforts to help the team win the match.

FW #13 UEDA Ayase (Kashima Antlers)
The team is surrounded by a positive vibe and we are eager to earn a victory. We weren’t able to win the first match, so we hope to earn a positive result this time. It is a very difficult pitch condition, but that can be said for our opponent as well, so we cannot make that as an excuse. We hope to convert this situation to our advantage and try to win the match.