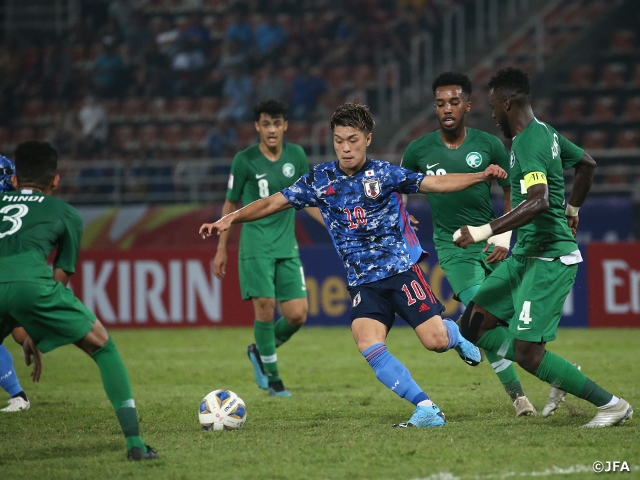 On Thursday 9 January, the U-23 Japan National Team faced the U-23 Saudi Arabia National Team in their first group stage match of the AFC U-23 Championship Thailand 2020. After each tame exchanged a goal apiece, Japan conceded a penalty kick in the closing minutes to lose the match 1-2.

In their first match of the tournament, coach MORIYASU Hajime named OSAKO Keisuke (Sanfrecce Hiroshima) as their starting goalkeeper, along with a defence line of WATANABE Tsuyoshi (FC Tokyo), OKAZAKI Makoto (Shimizu S-Pulse), and KOGA Taiyo (Kashiwa Reysol). While TANAKA Shunta (Osaka University of Health and Sport Sciences) and TANAKA Ao (Kawasaki Frontale) were named as the defensive midfielders, HASHIOKA Daiki (Urawa Red Diamonds) and SUGIOKA Daiki (Kashima Antlers) were positioned in the flanks. OGAWA Koki (Jubilo Iwata) was named as the lone striker, with HATATE Reo (Juntendo University) and MESHINO Ryotaro (Heart of Midlothian FC) playing beneath him.

The match started with Saudi Arabia applying aggressive pressure from their front line, as Japan struggled to control the ball and was forced to be in the defensive end. However, with their defence line showing great resilience, Japan gradually found their rhythm as they started to take control of the ball possession following the 15th minute mark. Although Japan conceded a close opportunity to Saudi Arabia in the 30th minute, Osako came up with a huge save to keep the match scoreless at halftime.

Despite the tenacious efforts made by the Japanese defence in the first half, the opening goal came few minutes into the second half, as Saudi Arabia converted their opportunity in the 48th minute. Japanese goalkeeper Osako later reflected on this goal, “We entered the second half with the intention to stay focused, so that goal was a huge disappointment for us.”

In efforts to level the match, Japan picked up their pace to apply more pressure in offence. With their fullbacks penetrating the flanks, Japan created an opportunity in the 56th minute, when Sugioka delivered a pass to Meshino, who struck a shot that took a deflection off an opposing defender before finding the back of the net, giving Japan the much needed equaliser.

With time running out, Japan made their final push to take the lead, but instead conceded a penalty kick in the 88th minute from their own mistake. Saudi Arabia converted this spot kick to take the lead and handed Japan with a 1-2 loss in the first match of the tournament.

Following the match, coach Moriyasu showed his regret, “A minor miscommunication has led to this result.” However, the Japanese coach continued by mentioning, “The players showed their capability to fight through the next two matches, so we must keep our confidence and prepare for our next match.”

MORIYASU Hajime, Coach
We knew this was going to be a very challenging match, and our players did well to prepare themselves for this match. Both sides created numbers of opportunities, and even when we conceded the opening goal, we managed to keep our composure and score the equaliser. The players showed their intention to win the match, but a minor miscommunication has led to this result. However, the players showed their capability to fight through the next two matches, so we must keep our confidence and prepare for our next match.

GK #12 OSAKO Keisuke (Sanfrecce Hiroshima)
Both teams created similar amount of chances during the first half and the fact that we managed to keep the score 0-0 shows that our performance was not too bad. However, we ended up conceding a goal early in the second half and that was very disappointing, especially because we were telling each other to stay focused to start the half. We also conceded another goal towards the end of the match, and it really showed our lack of focus.

DF #15 OKAZAKI Makoto (Shimizu S-Pulse)
With the team losing the match, there is nothing we should be proud of. Although there were some stretches where we played well, the result says it all. In football, even if you can control the ball, if you can’t score goals, it only builds momentum for your opponent. Instead of finishing our plays by taking shots, we were too undecisive with our plays, which ultimately led to the two conceded goals, so this is a very regretful loss for us.

MF #8 TANAKA Ao (Kawasaki Frontale)
Our overall performance was not too bad. However, the defensive midfielders had to drop back to support our defence more often, especially when the opposing attackers were pressing forward to apply pressure against our defence line. Of course, hindsight is 20/20, but I feel like I could have made better decisions in those situations.

MF #10 MESHINO Ryotaro (Heart of Midlothian FC)
In the scene where I scored the goal, I didn’t have much angle, but I still took the chance and it made me realise that sometimes it’s worth taking the chance. That play really portrayed my strong point, so I hope to continue to play aggressively and strive to score more goals. I was feeling the pressure, so I felt relieved when I score that goal. However, it doesn’t mean anything if the team doesn’t win, so I hope to score goals that can lead the team to victory.