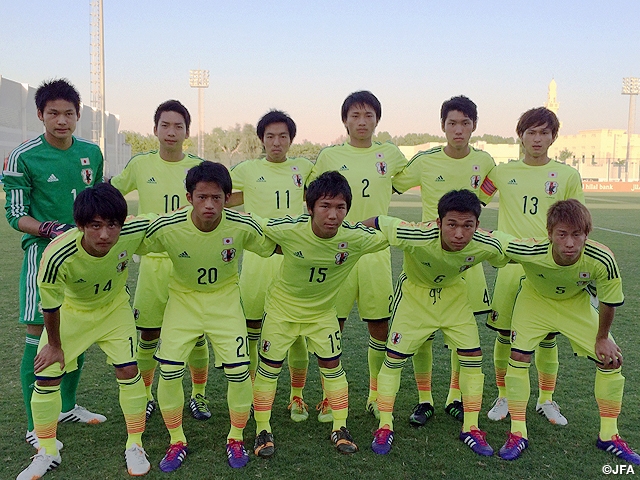 The first friendly match against U-19 UAE National Team.
In the early stage of the first half, the both teams were trying to dominate the game and taking the ball back-and-forth. In the 16th minute, as Japan squad were gradually controlling the pace, Sekine raced into behind defense space and kept the ball and passed it to Ishida who came running to support him. Ishida invaded the central field by dribbling and pass the ball to left side player Kaneko after attracting defense to him. He immediately passed it to Minamino and Ochi sent header home from a superb cross to center by Minamino. Japan scored the opening goal from continuous interplays.

After that Japan set up offense and Kaneko shot the through pass from Mochizuki in the 19th minute. It was blocked by the defense player but Ochi fired thrilling left-foot shot from outside the penalty area in the 21st minute. But again this shoot hit the goal post and couldn’t score additional goal.
Then came the 26th minute. Japan committed unnecessary foul from their mistake and gave a chance of free kick right in front of the goalmouth. But the goalkeeper Nakamura blocked the free kick by fine save and didn’t allow goal this time. Japan began to impose their rhythm again and in the 35th minute Minamino running on to space behind defense and get the through pass from Mochizuki who get the ball around center circle. Minamino calmly scored the second goal with left-foot shot. Japan finished the first half leading the game. 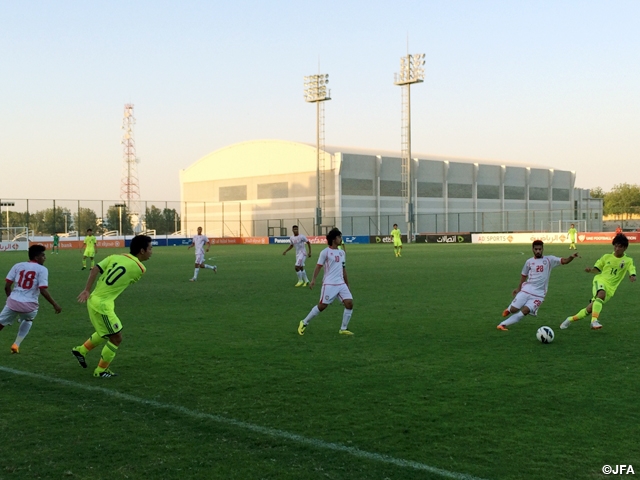 Japan squad was the side dominating the game in the second half. They picked up the pace of the game and passed the ball around, accelerated speed as it permits and built up the offense. In the 58th minute, Sekine who dribbled right side and broke through the defense, lobbed a cross to front of goalmouth. Minamino didn’t touch the pass from Sekine and let it flow to Kaneko, and he shot the ball. But it went wide of the goalmouth. In the 32nd minute, Japan got a chance of free kick in front of the goalmouth. Kawabe shot directly to the goalmouth but it was saved by the UAE goal keeper. In the 69th minute, substitute Tamura had a chance of 1-on-1 with goalkeeper but didn’t get the goal. Again in the 71st minute, Sekine got the through pass from Tanmura but it was blocked by goalkeeper again and no additional goal scored.
Then came the 76th minute. Japan committed unnecessary foul inside the penalty area and presented penalty kick. It was scored and leading by just one goal, 2-1. Japan squad set up offense and created chances for making bigger lead but couldn’t score. The game was over as it is. Japan won the first game after dominating the game although one goal was taken. 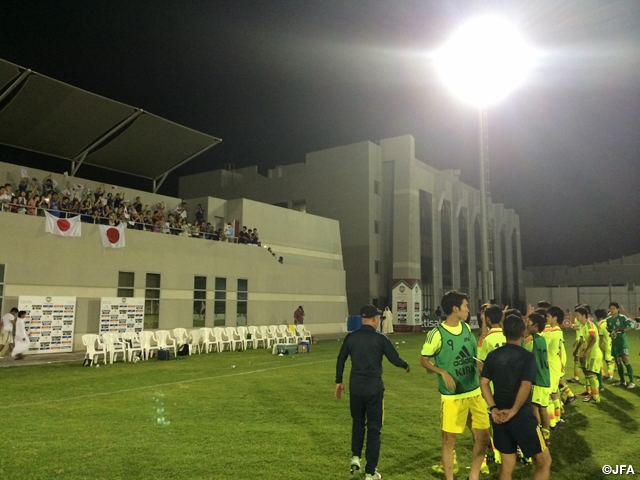 MINAMINO Takumi（Cerezo Osaka）
The first game simulating the AFC U-19 Championship, I think we could play as we like in many time slots in the first half. But in the second half, we lost the goal and the score was 1-2 because we were under attack by the other side for longer period of time and making more small mistakes. I will definitely improve these points and play better in the next game.

NAKAMURA Kosuke（Kashiwa Reysol）
I played international friendly game against UAE National Team and the result was 2-1. It was the game reminded me of how difficult to play in Asia in terms of score and the way we played. I am going to make a good preparation for the second game on day after tomorrow and the game after returning to Japan.

KAWABE Hayao（Sanfrecce Hiroshima）
Although it was the game in hot weather, we played very well, because we took proactive actions in both offense and defense. But the outstanding point is we couldn’t score one or two more goals after leading the game 2-0. It should have been easier game if we could have scored additional goal. Personally, I should have given pass to behind defense with one touch not just imagining, I need to get the result for doing that play.