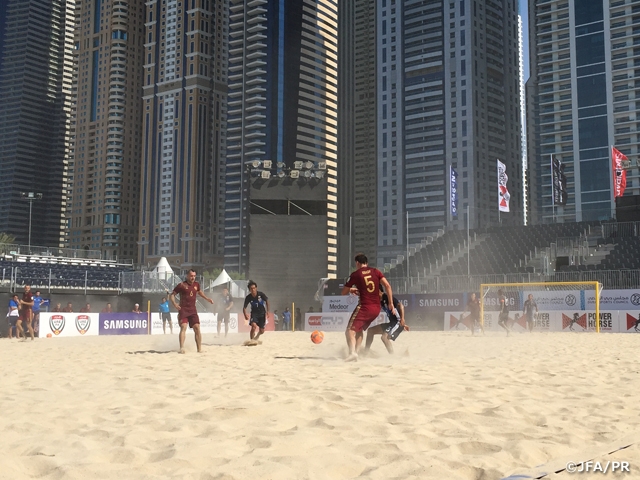 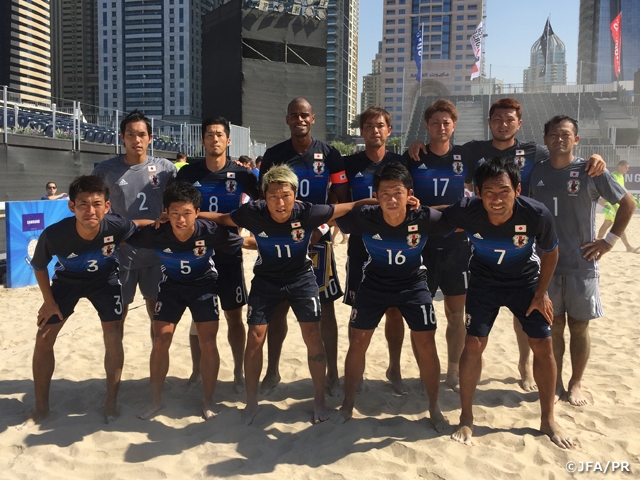 On Friday 29 October, the Japan National Beach Soccer Team, who is currently holding a camp in the UAE, had a training match against the Russian National Team from 13:00p.m.

Russia are one of the major players in beach soccer, winning two consecutive World Cup titles in 2011 and 2013 and becoming third place in 2015.

Japan kicked off the match with the ball. In the very first minute, OBA Takaaki capitalising on his individual skills scored a opener, taking the early lead for the Japanese side.

However, this was only a wake-up call for the Russian squad. Thereafter, Russia dominated possession and attacked the Japanese goal fiercely. Then, in the 4th minute, the East European counterparts scored a equaliser from a corner. Japan could not change the tempo of the game and, in the 10th minute, allowed a go-ahead goal to the opponents. The East Asians had to defend resiliently until the 14th minute, where they earned a free kick in front of the goal, and SAKATA Jun directly fired an equaliser into the back of the net. First period ended in a 2-2 tie.

The see-saw game continued in the second period. However, the difference was that the Japanese squad started to move the ball around much better compared to the first period and created scoring chances. The game stayed in the balance until the 11th minute, where the go-ahead came for the East Asian side. Goalkeeper TERUKINA Shingo attempted to score from long-range and Oba redirected the shot with a header into the opponents’ goal, taking the lead for the second time in the match. However, minutes later, the opponents using their high individual skills scored a game-tying goal. The match was all squared 3-3 at the end of second period.

In the third period, Russia continued to threaten the Japanese goal by aggressively taking shots to score a tie breaker. However, the Japan squad defended tenaciously and looked for their scoring opportunities from combination plays. European and Asian sides had their chances, but partly due to the fine saves made by both goalkeepers, the third period ended scoreless. The match now entered a three-minute extra time period.

After regulation, both teams looked for the game-deciding goal to put an end to a highly-contested match, but they failed to find the back of the net. The match now had to be determined by penalty shootout.

The kickers of both team successfully converted the penalties in the first and second rounds of the shootout. After the third Russian kicker found the back of the net, the Japanese player’s attempt was denied by the opposing goalkeeper, putting an end to this close match. The Japan squad lost their final match of their Brazil-UAE camp 5-6 (3-3 regulation and extra time, 2-3 penalties). 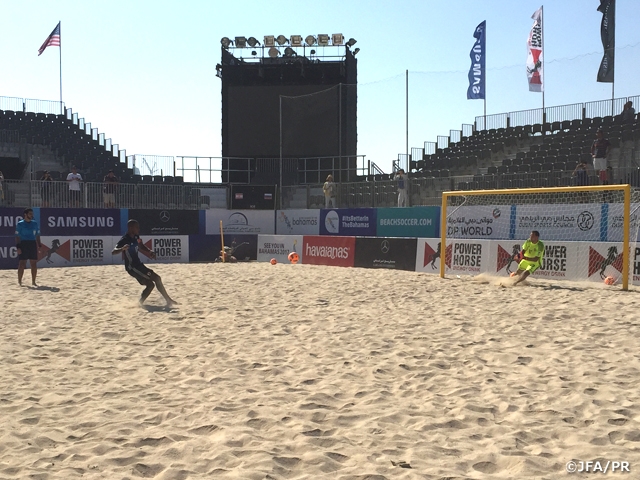 The Japan National Beach Soccer Team will be departing on the same date of the Russian match (29 October) and returning to Japan on the following day (30 October).

Marcelo MENDES, Coach
Both the training sessions and the training matches were significant in gaining experience to improve ourselves. I was able to observe how my twelve players would perform against the formidable opponents. In the Hungary match, if we do not play to the best of our abilities, then we could lose against the weaker side. In the Al Ahli Sports club game, we performed well and consequently posted a sweeping victory. The players corrected their issues on defence and defended well throughout the match. Lastly, against the two-time World Cup winner Russia, we had a closely-contested match where the game had to be decided on penalties. The lady luck did not smile on us and we lost the match. However, I am satisfied with their performance throughout the training camp.

Now, we need to move forward and face the next challenge. In getting ready for the subsequent competition, we have to improve ourselves even more. Finally, I like to thank the JFA and the supporting members of this wonderful training camp.

FP ＃10 MOREIRA Ozu (Fusion)
Our final match of this year was against Russia, ranked third in the world. We performed well, playing at our pace, but unfortunately lost on penalties. We shouldn’t look down on ourselves, but be proud of what we have achieved in this camp. I believe not only myself but the entire team improved significantly in this camp. We are looking to qualify to the World Cup as a top team in the regional competition and attain a good result in the world tournament. We still need to work on the issues found competing against the formidable opponents.

This camp has given us the opportunity to play against the top-ranking countries in the world, and as a result we improved ourselves significantly in the short span of time. As a member of the national team, I will continue to work hard and attain the positive results for my country.

FP ＃8 OBA Takaaki (Dorsole Kitakyushu)
We wanted to win the last match of the Brazil-UAE camp and finish this trip on a high note, but unfortunately we lost the contest. Personally, I missed the spot kick in the penalty shootout, and I feel quite disappointed. However, we need to face this result and learn from the loss in order for us to move forward. We will continue our hard work and improve ourselves as we get ready for the World Cup qualifiers. We must book a place in the world competition and do our best in attaining positive results there.