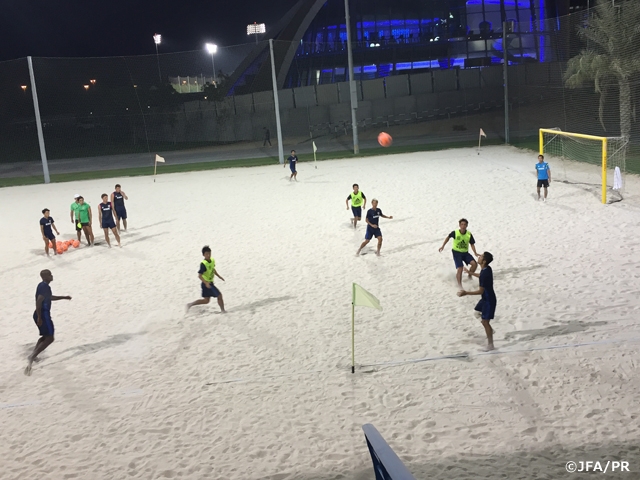 On Wednesday 26 October, the Japan National Beach Soccer Team, who is currently holding a camp in the UAE, had training sessions to prepare for the practice match the following day.

For religious reasons, the training could not be held at the beach, and the team moved to the sports facilities and practiced from 18:30 p.m.

The squad members started their practice session with a brief warm-up, while focusing on technical skills. Then, they moved on to a game-format training on a half-size pitch and checked on their team tactics under different situations. The main focus of this training was improving the quality of their offensive plays.

In the five-a-side intra-squad scrimmage on a full-length pitch, coach Marcelo MENDES talked to every member of the team and gave detailed instructions. To wrap-up the day, they had free kick and penalty kick exercises.

Prior to the training, the squad members visited the Japanese School in Dubai, where they received a warm welcome from the students. They interacted with the children by playing and practicing football together. Different players instructed them and went through unique and fun training sessions. Every participant of the exchange program enjoyed playing football. Also, loud cheers came from the crowd as they demonstrated one of characteristic plays of futsal, the overhead shoot.

At the end of the visit, they played several practice games, where the teams were divided among the same age group. At times, coach Marcelo and the national squad members came on the pitch and joined the student teams. There were plenty of excitement when they scored the goal. Watching the children smile during the practice matches, the players felt happy also and recovered from the fatigue of the long training camp. 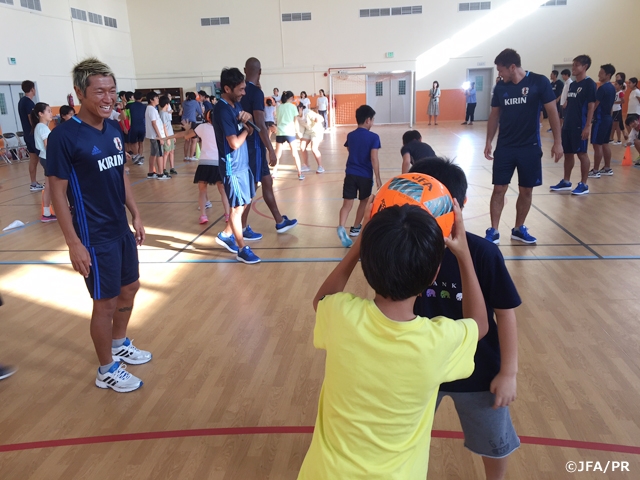 FP #16 SATO Eisuke (Tokyo Lequios BS)
We primarily focused on offence in the training today and played an intra-squad practice game. I joined the team from Dubai, but the squad has been playing extremely well winning the Asian Beach Games and becoming a runner-up in the Super Cup of Nations in Brazil. From the training match tomorrow, I would like to showcase my strength and contribute to the team’s victory.

FP #5 NAKAHARA Yuki (Aveldage Kumamoto BS)
In the second day of Dubai camp, we visited the Japanese School. Not only did we enjoy seeing the children smile, but also we were able to share the beauty of playing beach soccer. We will have three training match, starting with the one against Hungary tomorrow. Similar to us, Hungary has been improving recently and becoming a potent team. However, we are currently in excellent form (from the Tahiti match back in mid-September). We will focus on our style of football and win the game. 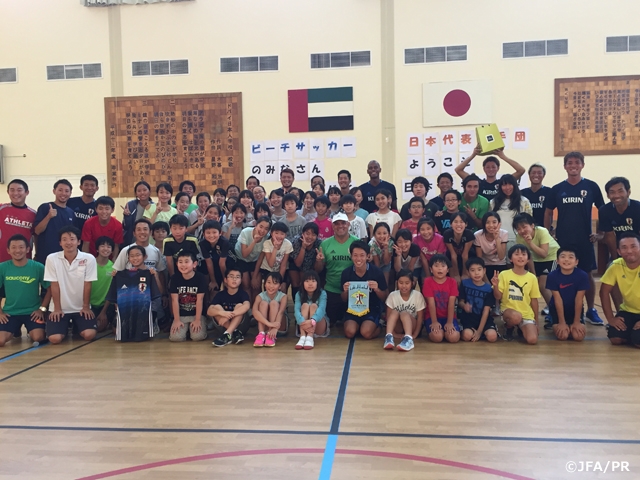