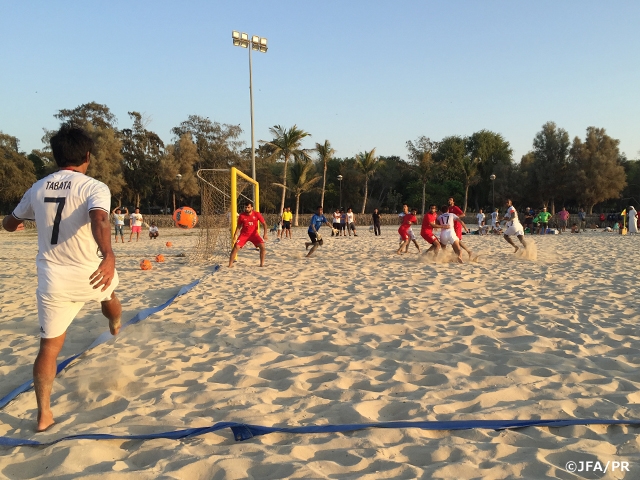 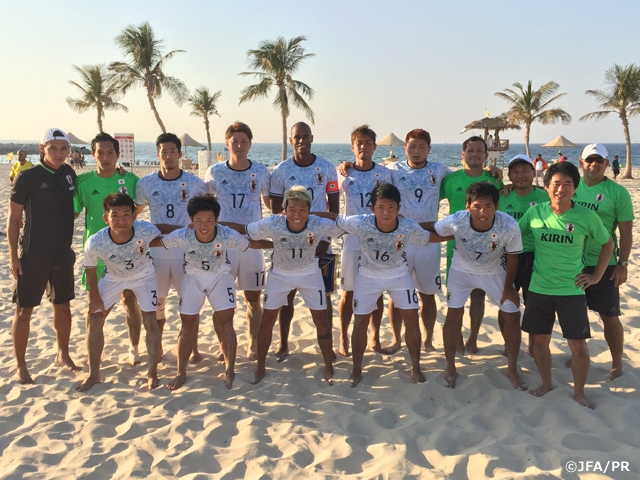 On Friday 28 October, the Japan National Beach Soccer Team, who is currently holding a camp in the UAE, had a training match against Al-Ahli Sports Club from 16:30 p.m.

Japan reshuffled the entire starting line-up from the Hungary match and competed against the Middle Eastern powerhouse club.

For the reserve members, the match had given them a great opportunity to showcase their skills, but in the 2nd minute of the first period, they conceded an opener to the UAE club. Thereafter, the Japanese side attacked fiercely, but partly due to the lack of accuracy in connecting passes, they were unable to finish the play with a shot.

The Asian champions decided to use their bench and gradually started to create scoring chances. In the closing minutes of the first period, GOTO Takasuke was fouled inside the penalty area, and he himself struck it calmly to equalise the score for Japan.

The go-ahead goal for Japan came in the 19th minute of the second period, where AKAGUMA Takuya successfully converted the penalty kick. Moments later, in the 20th minute, SAKATA Jun struck his first-ever goal for the national team and extended the lead to 3-1. However, the UAE powerhouse, utilising their individual skills, scored their second to narrow the scoreline to a single-point difference.

In the third period, the opponents attacked the Japanese goal fiercely, but the fine saves by TERUKINA Shingo denied their chance to tie the scoreline. Then, in the 33rd minute, MOREIRA Ozu found the net from mid-range to regain their two-point advantage. Furthermore, in the 37th minute, Akaguma turned himself superbly and stuck a shot successfully, extending their lead to 5-2. Tally of goals did not end here for Japan, as Sakata robbing the ball from the opponent dribbled up the field and fired the sixth for the East Asian squad.

Towards the end of the game, Japan gave away a penalty kick to the UAE club, but the outreaching right hand of goalkeeping Terukina denied their opportunity to score. The final whistle was blown right after the spot kick, and Japan posted a convincing victory 6-2 over the Middle East powerhouse.

On Saturday 29 October, the Japanese national team will meet the Russian squad in their third and last training match of the UAE camp. The following match will take place at the Dubai International Marine Club from 13:00 p.m. local time. 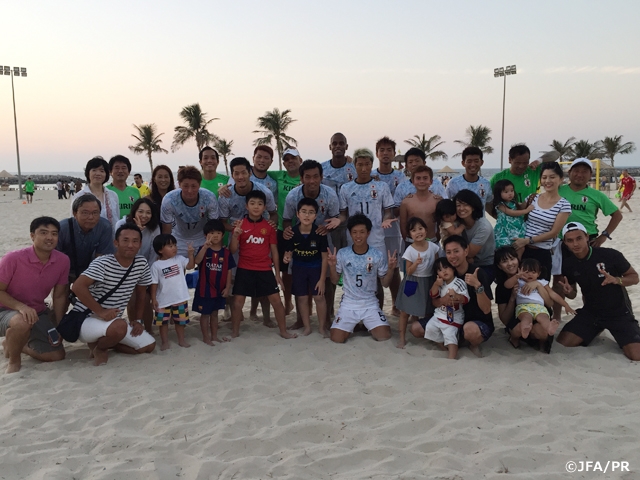 FP #11 GOTO Takasuke (Fusion)
The pitch of the beach soccer differs from country to country in terms depth, fineness and quality of the sand. The beach venues in Dubai are much finer and deeper compared to Brazil, and there is a difference in the physicality required to play on such pitch. Partly due this fact, we lacked the accuracy of passes and shots in the past two games. However, this is also an interesting aspect of beach soccer. Since we do not have many occasions to play in this kind of sand, I want to make the most out of it.

GK #2 KAWAI Yusuke (Sol Mar Praia)
Having lost the match against Hungary, we came in determined to win against Al-Ahli Sports Club. Despite the fact that we conceded the opener early in the game, we were able to talk amongst ourselves and check upon the things we needed to do on the pitch. We performed well, correcting the issues found from the yesterday’s match. There were both positives and negatives in the game, as we scored more goals, but we still lacked the shooting accuracy and could not make the most of our scoring chances. In the Russia match tomorrow, we need to focus on the details and keep a high-level concentration until the end of the match.