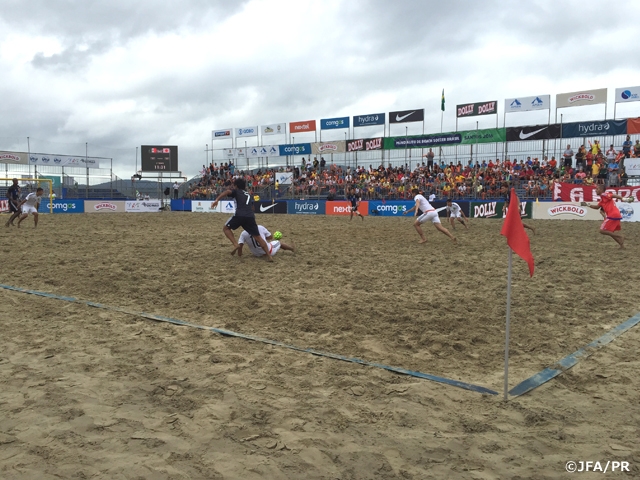 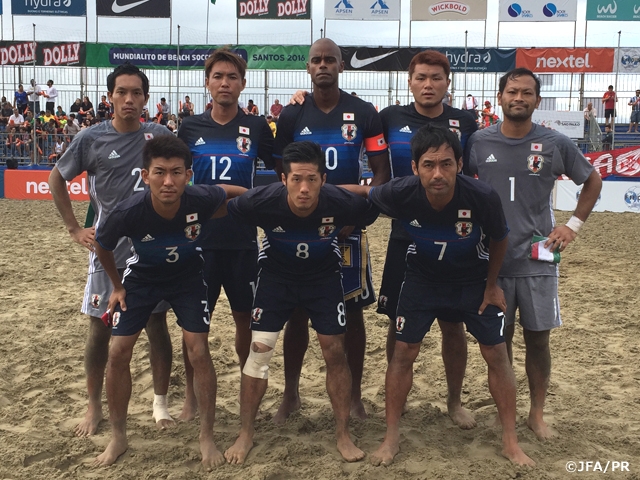 The Japan National Beach Soccer Team, who are participating in the Super Cup of Nations in Santos, São Paulo (Brazil), faced Mexico in their third match of the competition on Sunday 23 October.

Japan took the initiative of the match from the very beginning by scoring three goals in the opening minutes of the match.

In the 1st minute, the opponents conceded a penalty kick from a reckless foul, and MOREIRA Ozu successfully converted the spot kick to open the scoring. In the 2nd minute, AKAGUMA Takuya changed the direction of the shot taken by goalkeeper TERUKINA Shingo, and OBA Takaaki found the deflected ball right in front of the goal and fired a second goal for the Japanese side. In the 3rd minute, ISO Hiroaki redirected the shot taken by Akaguma into the opponents’ net, extending the lead to 3-0 in the first three minutes of the match.

Thereafter, Japan controlled the match by having possession of the ball and playing in the opponents’ half. They did not allow Mexico to create scoring chances in their end.

Even after scoring three goals, Japan were on the hunt for more goals. In the 11th minute, from a well-executed combination play, TABATA Teruki fired the fourth goal for the Asian champions. The first period ended 4-0 in favour for Japan.

In the second period, there were stretches where Mexico pressured the Japanese goal, but the Asian side defended tenaciously and did not allow the Central American counterparts to take a shot. The game stayed in the balance for a while, but, in the 9th minute, Moriera scored from a stunning long-range shot to extended the lead to 5-0. Furthermore, in the 11th minute, receiving a long pass from KAWAI Yusuke, Oba found HARAGUCHI Shotaro in front of the goal, and he, in turn, slotted the sixth goal for Japan.

The momentum did not shift in the third period. In the 2nd minute, Moriera connected a cross from Akaguma and scored the seventh goal for the Asian side. Then, in the 8th minute, Moriera, showcasing his individual skills, cannoned a long-range shot into the opponents’ net, stretching their advantage to 8-0.

Japan were tenacious in defence despite the scoreline. They continued to pressure the opponents even in the closing minutes of the game. They kept a clean sheet and posted a sweeping victory 8-0 over Mexico.

Today was the final day of the competition. The results were: 1st place Brazil, 2nd place Japan, 3rd place Italy, and 4th place Mexico. Moreira Ozu was the top scorer of the Super Cup, and he was awarded the most valuable player in the competition.

The Japan National Beach Soccer Team will be departing São Paulo today (Sunday 23 October) at midnight for the next camp location, Dubai in the United Arab Emirates.

FP #10  MOREIRA Ozu (Fusion)
We played an excellent match against Brazil, but it was regrettable that we lost the close contest in penalties. However, we won the subsequent two matches against Italy and Mexico and became the runner-up of the competition. I take this result as a positive in the Brazil trip.

We need to improve further during this camp. We will be moving to Dubai and continue our training there. I hope the trip in Dubai will be equally or even better than the one we just had in Brazil. Thanks to my teammates, I became the top scorer and received the MVP award. I am very happy and grateful about this. I would like to keep up my hard work and attain positive results in the future competitions.

FP #12  ISO Hiroaki (Sol Mar Praia)
Winning was a must, and if Brazil lost the match against Italy, we had a chance to win the competition. Since the cup title was not out of our reach, we were highly motivated entering the game. In the first period, we performed well and accordingly to the game tactics planned by our coach. We had fewer field players available for this match. But this was not a problem for us. We defended tenaciously and won a sweeping victory with strong team effort.

Watching the video footage of the Brazil-Italy match played later on the same day, I felt there are still so much room for improvements. Capitalising on this experience and the things I felt during this camp, I will keep working hard in training.