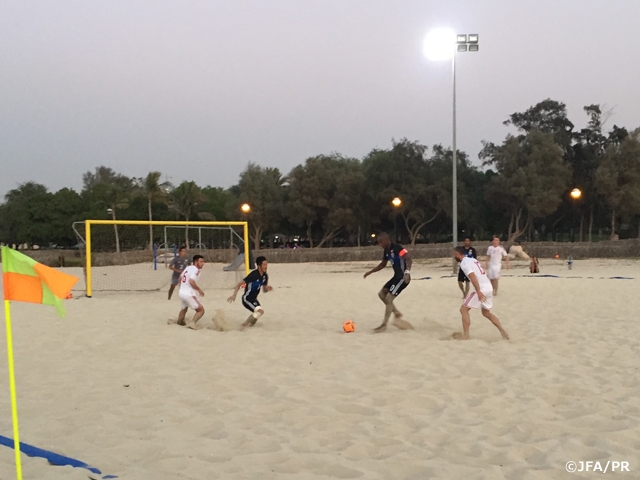 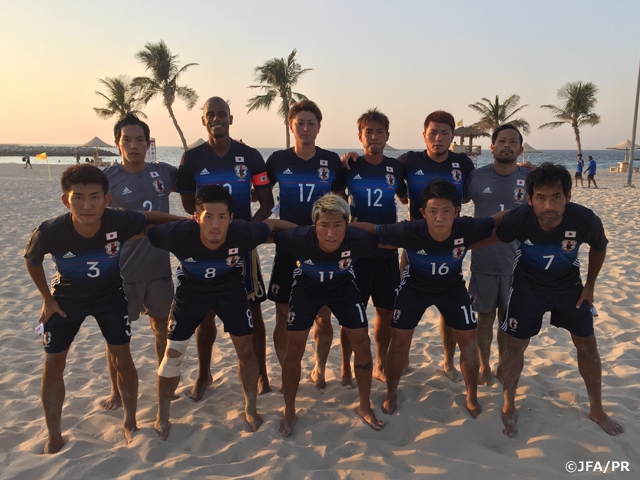 On Thursday 27 October, the Japan National Beach Soccer Team, who is currently holding a camp in the UAE, had a training match against the Hungary National Team.

From the beginning of the match, Japan took control of the match by having possession and moving the ball at their pace.

In the first period, Japan created many scoring chances from goalkeeper TERUKINA Shingo’s shots and passes, but failed to capitalise on them due to the lack of shooting accuracy. On the other hand, Hungary attempted to open the scoring from long-range shots, but they could not apply the finishing touch to find the net.

Nothing changed in the second period as the Japanese side continue to dominate possession, while Hungary were forced to defend in their own end. In the 16th minute, the Asian squad earned a free kick near the centre of the pitch, where MOREIRA Ozu aimed directly at goal and successfully opened the scoring for Japan. Thereafter, they continued to attack with well-constructed combination plays, but again shots lacked the precision to stretch their lead.

Then, this time it was Hungary’s chance to open their scoring. In the 26th minute, the penalty kick was awarded after the play was ruled a hand ball inside the penalty box, and they successfully converted the spot kick to equalise the score.

The action-packed second half did not end with the tie. Right after this equaliser, Japan attempted a kick-off shot, where the cleared ball went directly towards HARAGUCHI Shotaro, who then netted a go-ahead goal with a superbly struck overhead shot. Furthermore, in the 28th minute, from a well-executed combination play in front of the opponents’ goal, OBA Takaaki fired a shot into the net to extent their lead to 3-1. Just as thought the Japanese side will take a two-point advantage into the second intermission, Hungary found their second to cut their deficit to merely a single goal.

Hungary took the momentum of the last-minute goal right before the break and scored directly from the kick-off shot in the third period. Now the scoreline was all squared at 3-3. 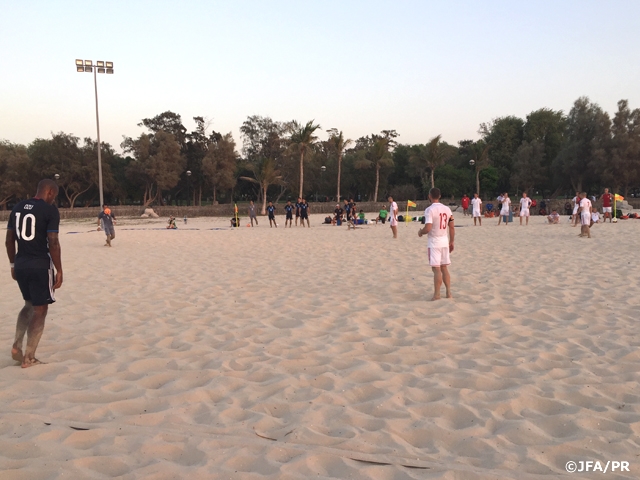 The match remained in the balance until the closing minutes, where both teams failed to capitalise on their scoring opportunities. The go-ahead goal came in the 43rd minute, where the East European side struck the long-range shot into the Japanese net. Thereafter, Japan attacked fiercely until the final whistle, but could not equalise the contest and lost their first training match in the UAE with the final score of 3-4.

On Friday 28 October, the Japanese squad will meet the powerhouse club team of the UAE League, Al-Ahli Sports Club, in their second training match of the Middle East camp. The following match will take place at the Mamzar Beach from 16:30 p.m. local time.

FP #7 TABATA Teruki (Tokyo Lequios BS)
One of the most important lessons from the Hungary match was making necessary adjustments in the game, when the opponents have control of the match. In football, we cannot perform well in all the games, but we still need to find the way to win those matches. The vital thing here is not regretting about the loss today, but thinking about how you capitalise on this experience and improve as an individual and also as a team. We need to make the most out of the remaining two matches.

GK #1 TERUKINA Shingo (Sol Mar Praia)
Looking back at the Hungary match, we dominated possession and created scoring chances, but failed to capitalise on those opportunities. As a result, we had a tough match. Despite scoring the opening goal, we allowed the opponents to equalise, and partly due to the lack of shooting accuracy we were not able to stretch the lead when we had the chance to do. In the last part of the game, we conceded the go-ahead goal and lost the match.

I believe we should have won this match. It wasn’t the opponents who performed brilliantly and defeated us, but it was our sub-par performance that caused this result. We cannot play at our pace and win every match. Even when we are not performing well, we need to play accordingly and manage the game better, if we were striving to become a better team in the future.

We should not forget about this loss today and repeat the same mistake in the Asian qualifiers or the World Cup. We have to correct those issues found in the game today and play better in the upcoming training matches scheduled tomorrow and the day after tomorrow.