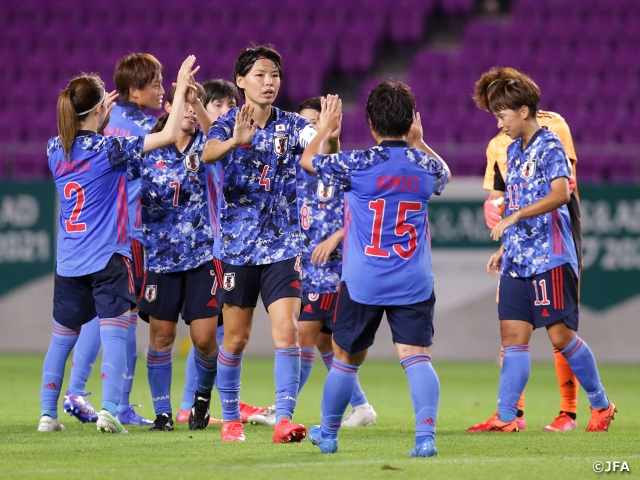 With referee SUGINO Azusa signalling the start of the match, Australia took advantage of their speed and power to take the initiative but led by the steady performance showcased by their goalkeeper YAMASHITA Ayaka (INAC Kobe Leonessa), Japan was able to find their composure against their AFC rival. As the match progressed, Iwabuchi, who wore the number 10 jersey for the first time, started to create opportunities in the attacking third. In the 30th minute, Iwabuchi delivered a pass that freed up Sugasawa, who made an attempt to lob a shot over the Australian goalkeeper but couldn’t get enough lift to find the net. Seven minutes later, HASEGAWA Yui (AC Milan) delivered a pin-point through ball to give Sugasawa a chance to break away, but this play was called off-side. Against the Australian ace Samantha KERR, Japan showcased great coverage to monitor her moves and managed to keep her scoreless in the first half. 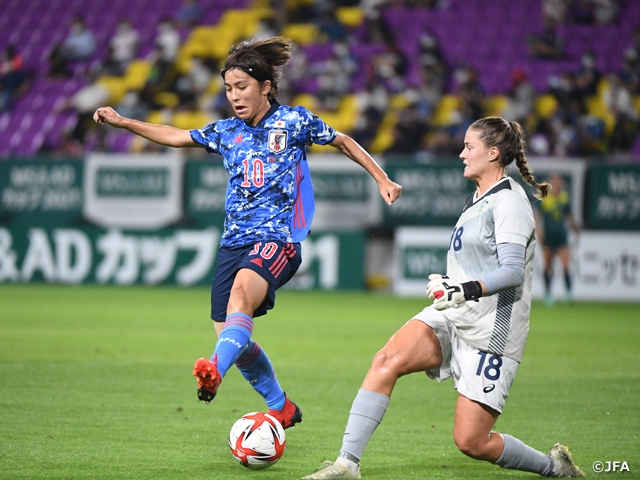 Following a scoreless first half, Australia made six changes to their line-up, rotating the entire attacking third to start the second half, while Japan made no changes. The decisive moment came in the 54th minute, when MIYAGAWA Asato (Nippon TV Tokyo Verdy Beleza) delivered a pass to Hasegawa who broke into the open space in the left flank. The cross sent by Hasegawa deflected off the hand of Alanna KENNEDY inside the box, giving Japan a PK. After Iwabuchi calmly slotted the ball into the left corner, a big cheer erupted from the 2,584 fans who attended the stadium.

With Iwabuchi scoring in four consecutive matches to give her side the lead, Japan made four substitutions in the 63rd minute to change the looks of their offence. A minute after getting introduced to the match, ENDO Jun (Nippon TV Tokyo Verdy Beleza) fired a powerful shot that struck the crossbar. TANAKA Mina (INAC Kobe Leonessa) also created numbers of opportunities in the closing minutes, but the match ended with a final score of 1-0. With a win over Australia who is ranked 9th in the FIFA ranking, Japan gained great momentum ahead of the Tokyo Olympics. 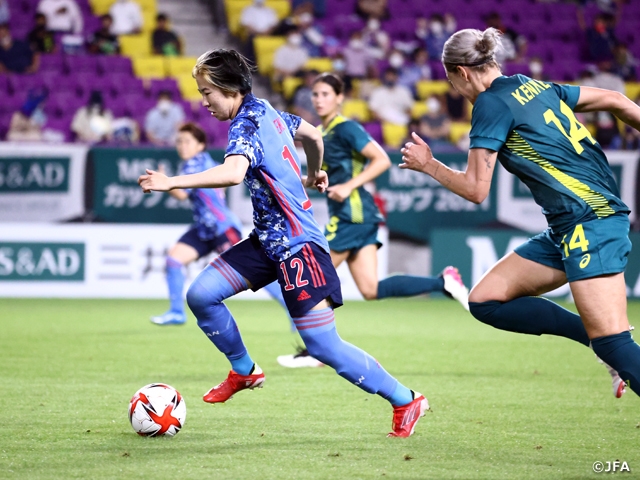 The Nadeshiko Japan will now travel to Sapporo where they will face Canada in their first group stage match of the Tokyo Olympics on Wednesday 21 July.

TAKAKURA Asako, Coach of Nadeshiko Japan (Japan Women's National Team)
With just a week left ahead of the Tokyo Olympics, we feel very grateful to be given this opportunity to face a wonderful team like Australia. Facing the opponent’s world class speed and power, our team played a bit passive in the first half. Once we got used to the intensity level, we were able to make the necessary adjustments, and despite the goal coming from a PK, we are extremely satisfied with this result. We will make good use of this match and try to raise the overall level of this team ahead of the Olympics.

DF #5 MINAMI Moeka (Mitsubishi Heavy Industries Urawa Reds Ladies)
It was great that we were able to keep a clean sheet. The fact that we maintained our focus in restarts allowed us to earn this result. We knew that (Samantha) Kerr was their key player, and I made sure with (Kumagai) Saki-san to keep our eyes on her at all times. We were also anticipating for the long balls, so I feel like we did a fine job of keeping our opponents from creating major chances. However, we still have plenty of room for improvements, so we hope to make the necessary adjustments ahead of the Olympics. 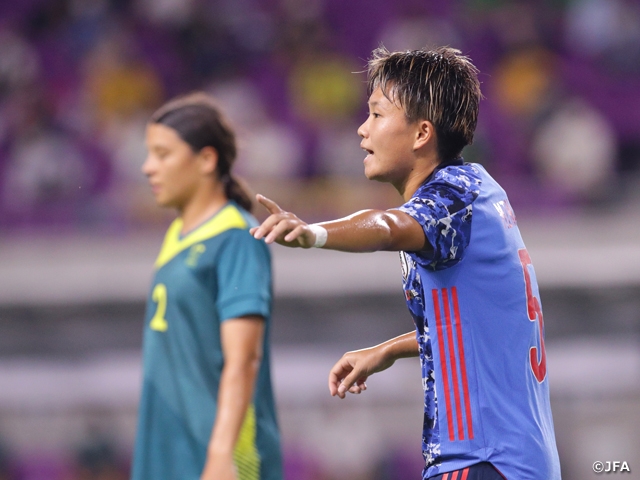 DF #16 MIYAGAWA Asato (Nippon TV Tokyo Verdy Beleza)
Australia played with great intensity, so I was constantly worried about leaving an open space behind me, but I focused on keeping the ball moving to press forward. Despite facing faster opponents than usual, I was taking too much time to pass the ball, so that is an aspect I must fix. I have been playing on the same side with (Hasegawa) Yui-san lately, so we have gotten much better with keeping a good distance with each other and I feel like we managed to showcase some good pass works today. We hope to make the most of this match and use the remaining time to raise the overall level of the Nadeshiko football. 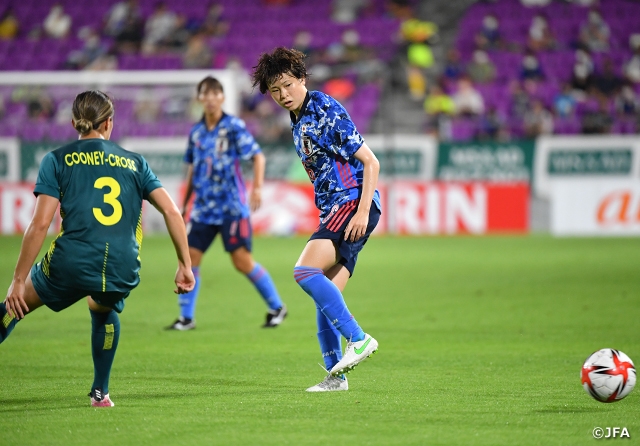 MF #8 MIURA Narumi (Nippon TV Tokyo Verdy Beleza)
It has been a while since we faced a team with such speed and power, so it took us a while to get used to their intensity level. It was great that we were able to win the match, but it would have been better if we could have scored more goals to dominate the match. There is a sense of urgency in that aspect, so we hope to make good use of the remaining time to prepare ourselves for the Olympics. I always get great energy from the crowd when I step onto the pitch, so I was really hoping that the fans would be allowed to come watch us during the Olympics. However, that is not the case, so I played today’s match with the intention to convey a message to our fans that “we will give our best at the Olympics.” I will try to showcase a performance that can convey a message to our fans through the live feeds. 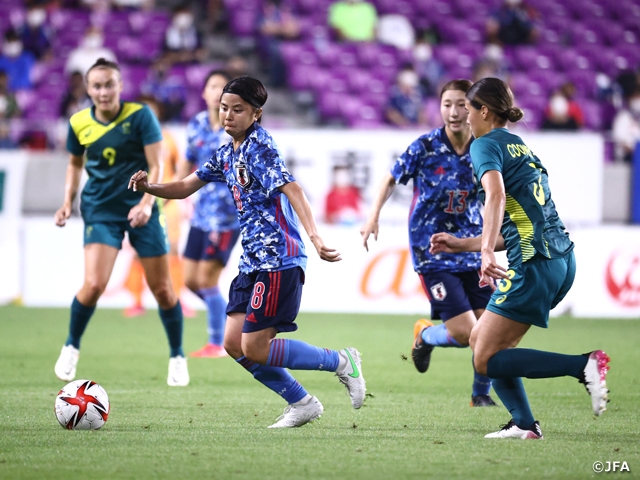 MF #12 ENDO Jun (Nippon TV Tokyo Verdy Beleza)
Although I was able to create many chances, I feel like there were opportunities I had to capitalise as a striker, so that is an aspect I must improve on. We faced players who are extremely strong in one-on-one situations, which is something we are expecting at the Olympics, so I need to get stronger in the one-on-ones myself to win those battles. I am always anticipating for opportunities to take shots from distance, and although I was able to take some shots today, I wasn’t able to convert them, so I will continue to polish up the quality of my shots. I will do my best to contribute for the team’s victory.

FW #10 IWABUCHI Mana (Arsenal/England)
It was great that we were able to win this match. However, I still feel like we need to make more attempts upfront and get ourselves involved with the ball more often, so we hope to increase the variations of our offence. The fact that we were able to keep a clean sheet is another thing we can take away from this match, as we managed to force turnovers as we planned and didn’t create many scenes where we were getting overwhelmed by our opponent’s speed. We haven’t decided on who is going to take the PKs, but (Hasegawa) Yui called out my name, so I took the PK. We have just one week left ahead of the Olympics, so we will try to improve our conditions within the limited time.