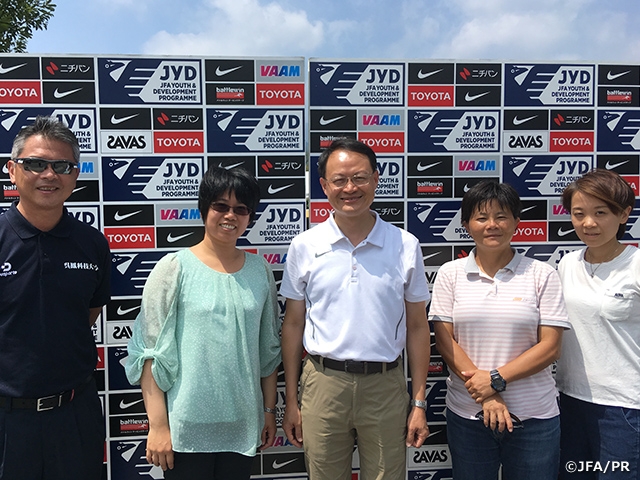 Delegation of the Taiwan Sports Administration (equivalent to the Japan Sports Agency) visited Japan from Wednesday 1 August to Sunday 5 August to learn the supporting structure between schools, administrations, and associations within the Japanese football community.

During their short stay, the group conducted various observations in efforts to heighten the overall level of the Chinese Taipei football, including visits to the Football Future Programme（FFP）2018 Central Nippon, that was taking place during their stay at Tokinosumika Sports Centre, Shizuoka. They also visited Tokoha University Tachibana Junior and Senior High School, JFA Academy Fukushima, women’s football matches at the Inter High School Sports Festival, and took lectures on JFA’s youth development and women’s football. 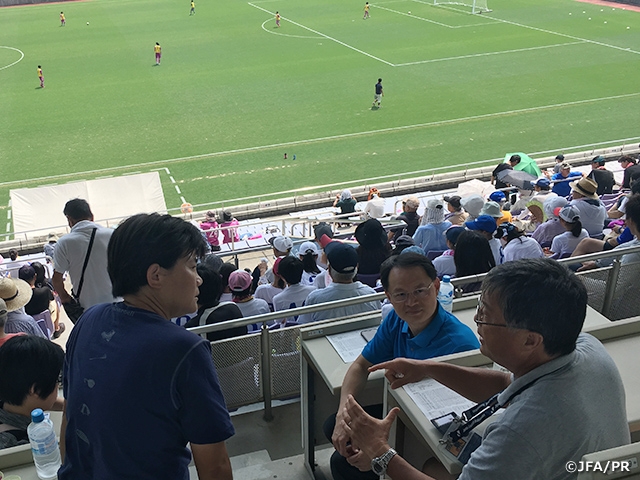 Tsai Chung-I, Deputy Director (Chinese Taipei Sports Administration Ministry of Education)
“Japanese football has come long ways to develop into the current environment.” Those were the words of the Vice Technical Director YAMAGUCHI Takafumi, who explained to us with his honest words, how Japanese football has developed over the years and regarding the JFA’s Promise 2050.

From the lecture given by the Chairperson of the Women's Committee IMAI Junko, we learned that both Japan and Chinese Taipei shares the same task of “How to get female junior high school students to like football.” In order to further develop women’s football in each country, I felt the need for us both to make more efforts. Of course, the level of women’s football in Japan is already world class, and we acknowledge that they take lots of pride in the Nadeshiko Japan. As for Chinese Taipei, we must seek for ways to catch up with the world’s standard and establish a style that can only be displayed by the Chinese Taipei women’s football team. Those are something we must work on, and this trip made us keenly aware of the fact that we must make more efforts along with the other personals involved in Chinese Taipei football community.

While observing the women’s football match at the Inter High School Sports Festival, Chief Coach of the Women's JFA National Training Centre OHNO Makoto gave us time for discussion during his busy schedule. We watched the high-level battle between Fujieda Junshin High School and Tokiwagi Gakuen High School. The fact that the tournament organisers had set the match time in the spirit of “Players First” left a strong impression.

“Chinese Taipei needs to find an instructor that can construct the football development system while respecting the Chinese Taipei culture.” These words given by Women’s Chief Coach Ohno, must be taken into consideration as we make efforts to spread the Chinese Taipei football. Also, the JFA Academy Fukushima’s philosophy shared by Chief Coach NAKATA matched our nation's educational ideal in which Chinese Taipei must drive forward with.

From this tour in Japan, we have been able to see that the JFA has not only been emphasising on spreading the football skills, but rather attaching a great deal of importance on cultivating human skills. I strongly felt that their main goal is to develop world-class individuals through football, who are both independent and confident. I believe that this is an aspect Chinese Taipei must learn from.

With the warm hospitality shown by the staffs of the JFA, we were able to spend a productive time, which provided us with a clear vision of the future pathway for the Chinese Taipei Football. Thank you very much.

Tsai Shou-Pu, Professor (WuFeng University)
When Vice Technical Director Yamaguchi mentioned, “There were times when football matches in Japan only attracted a few spectators,” it struck me that, “That is exactly where Chinese Taipei stands right now.” In another words, if the Chinese Taipei football community can follow the footsteps of Japan, we might be able to breakout of the current situation.

Our observations started by visiting the Japan Football Museum, followed by receiving lectures to learn the management system of JFA Academy Fukushima and three other academies, as well as the operation methods of Tokoha University Tachibana Junior and Senior High School women’s football team. Through these activities, we were given the opportunity to deepen our knowledge on the development of Japanese football, which was highly impressive. We also observed the actual sites of FFP in first hand, and saw the passion, enthusiasm, and efforts displayed by each of the instructors, staffs, and coaches to develop the young players.

We have been given numbers of lectures on various topics, but throughout them all, I felt a common theme that, “Youth development,” “Coach training,” “League structure,” and “Popularisation” played an essential role in the development of Japanese football. We are seeing gradual progress in Chinese Taipei, but the biggest challenge we are facing right now is, how to put the plans into action while maximising the effects.

Lastly, I would like to express my sincere gratitude to the JFA for welcoming us with warm hospitality. We sincerely hope to see an unchanging support towards the Chinese Taipei football community.

Lu Kuei-hua, Associate Professor (National Taiwan University of Sports)
First of all, I would like to thank the JFA from the bottom of my heart for their sincere and heartful hospitality.

During our stay in Japan, we have learnt the visions set by the JFA, their goals, the history on the development of women’s football, regarding JFA Academy Fukushima, and the development of football education conducted by the schools. Throughout all these lectures, what I felt the most was that it takes a collective effort by the entire community to develop and popularise football at the national level. The JFA has experienced the phases where they couldn’t win international matches, couldn’t participate in the World Cups, couldn’t attract spectators to their league matches, which spanned for 50 years. But even under such circumstance, they were quietly laying out their foundation for football popularisation, coach trainings, instructor trainings, youth developments, and league culture. That is why when the opportunity arrived, they were prepared to capitalise on it and develop into their current state, which many of the Asian countries envy and look up to as an advanced football nation. As Women’s Chief Coach Ohno has mentioned, Chinese Taipei must first find personals who are sincerely trying to heighten the overall level of Chinese Taipei football. And if we can construct a healthy organisation with people like that, then we might be able to see a development in Chinese Taipei football.

Once I return to my country, I will utilise what I have learnt in Japan and take action at the local area where I belong. I will construct a system that can become as a model for the entire Chinese Taipei to follow. We will continue to work hard and strive to bring Chinese Taipei football to a higher level within our generation. Thank you very much. 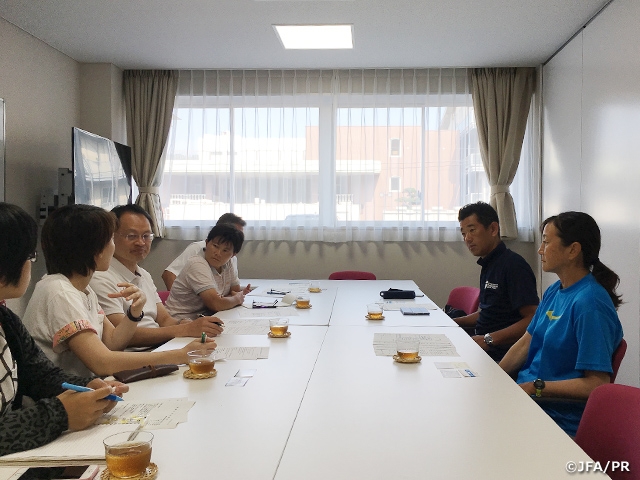