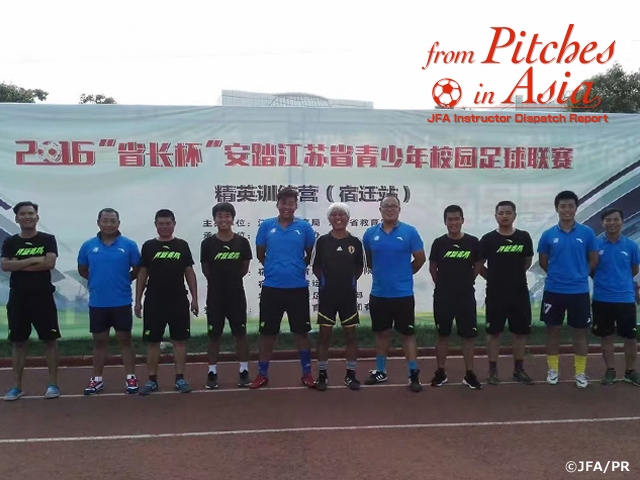 The 24th edition of “From Pitches in Asia”, in which we introduce the viewpoints of instructors active in Asian countries, was written by Mr. KANEKO Takayuki, who works in Jiangsu Province, China as the Technical Director.

It has been two and a half years since I started work in China. The time has passed by quickly. My first assignment was to work for the U-16 Jiangsu Women’s Youth Team, and a year later I also work as coach of the U-18 Women’s Team. And since last January, I have been working as the Technical Director of Jiangsu Province, taking roles as Head of Youth Development and Chief of Coach Education.

In China, head coaches change frequently even in the youth-categories as they are strictly judged only by their results.

Since they put a strong emphasis on results even in daily life with a little consideration for the progress made during the course of action, it is necessary to have understanding on the importance of setting the longer-term objectives for the future, especially in the youth generations. For example, in the instructors courses, coaches are more eager to learn about the various methods used in practice rather the theories and principles behind such training. However, there are an increasing number of instructors who begin to consider the significance of ‘international standards in coaching football and they are starting to design their training based on solid principles.

With the strong support from President Xi Jinping, the environment to promote football in schools along with developing instructors has improved significantly. This initiative has become a tail wind for the development of football across the nation.  For this reason, my recent proposals on a localised development program and a coach education project for the Jiangsu Province have been recently approved. I am very much looking forward to see the bright future of football in China. 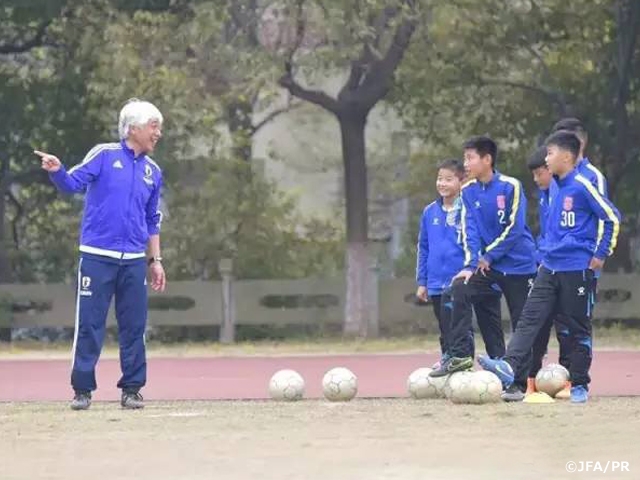 Even though I am not fluent in Chinese, I still can communicate with them using Chinese words. This helped me build a better relationship with the football association and the instructors of the local schools as I can coach them directly.

The important thing I learned since I started to work here two and a half years ago is my attitude to work with the local people, and I put every effort to communicate with them with my limited Chinese. It is interesting to see how their attitude change gradually and I have more colleagues who are willing to work with me now. I believe this is the essence of building a good relationship in this country. It wasn’t an easy task, but by frequently meeting and talking to one another. I was able to reconfirm that building a strong relationship regardless of the difference in nationalities is quite possible.

Sharing an episode when I took a cab one day, the driver took the wrong way and charged me three times more than the usual fee. I wasn’t fluent in Chinese but I still tried to explain and pay the entire amount by saying ‘do not worry. Probably, you didn’t understand my Chinese.’ Then, the driver responded ‘I misunderstood the instructions. Just pay me the normal fee.’ We agree upon the price which was 1.5 times the normal fee, but for me this rarely happens in China. In fact, the driver and I became friends since and he told me to give him a call next time so he will take me to anywhere I want.’ Actually, I used his cab several times since and he sometimes gives me a discount. I bring him small gifts from Japan, and he gives me Chinese Tea in return. They are friendly people once we get to know each other. This episode gave me the confidence to build a good relationship with the Chinese people.

Current situation of football in China

It is widely reported by the media that the Chinese enterprises are actively investing on foreign club teams and star players. The owner company of Jiangsu Suning Football Club* also bought Internazionale in Italy to build stronger ties with the Italian clubs. Some people say “Top teams are relying too much on foreign players and we are not seeing significant improvements in the local players, and they do not help our national team.” “We are not getting positive results from our top players in a short term, therefore, we should rather focus our efforts on youth development for a longer term.”

There is no other team like Guangzhou Evergrande Taobao Football Club* in the world. Their facilities include 50 full-sized pitches, accommodations and education from primary to high school with more than 100 Spanish instructors through partnership with Real Madrid and a total of 2,800 players are now playing in this one club.  As mentioned before, President Xi Jinping’s support in promoting football at local schools has been a positive influence in the development of football across the nation. As Jiangsu province that I work for finally started to show their interest in youth development, it has become important to have more qualified football coaches. This national-level effort to develop football will be the next driving force, which will dramatically change the future of football in China.
*Professional Club Teams in the Super League of China 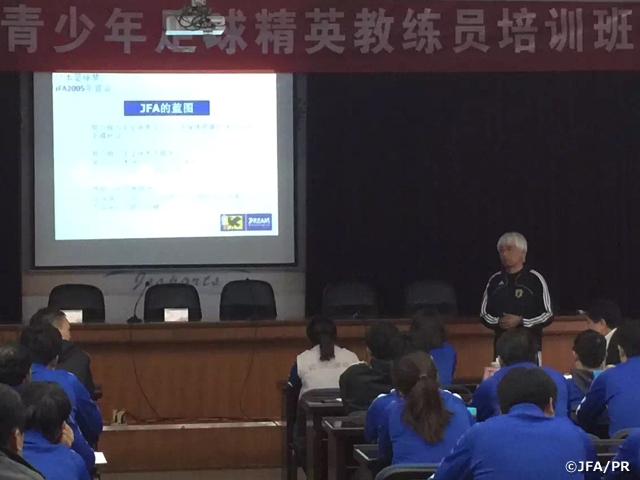 What is necessary to coach in China

In this country, the staff members of the football association and the local instructors show their respects towards the football in Japan, and some of my Japanese colleagues also work in China. I believe anyone who follows the training principles of the JFA at the same thriving for excellence in quality can become a good coach in this country. It is also important to make efforts to communicate the demands on the pitch in the local language. Using the interpreter can create a time lag, which reduces the effectiveness of the instructions, and it becomes necessary to anticipate what to communicate beforehand.

We also base our coaching on three basic principles of decision making ‘quick, simple, and to the point’. This will enable the players to figure out the solutions by themselves and it is this simplicity that they can focus on the essence of football by doing the simple drills right.

We see cultural differences in our daily life, however, as they show respect towards us, it is also important that we show our sincere respect towards them as well.  As long as you work with your ‘Japanese identity,’ we can become excellent instructors anywhere in the world.

After the Chinese New Year, the football season will start officially. We have several tasks set for this year: a) improve the quality of football at local schools, b) create new curriculum for coach education with the local staff, and c) develop qualified instructors. Especially, we will put a strong effort on the training centres for the U-12 players and coach education. Having the support from the local authorities and the football association, I will aim to set the framework for the future of football in Jiangsu Province within the remaining two years of my tenure.