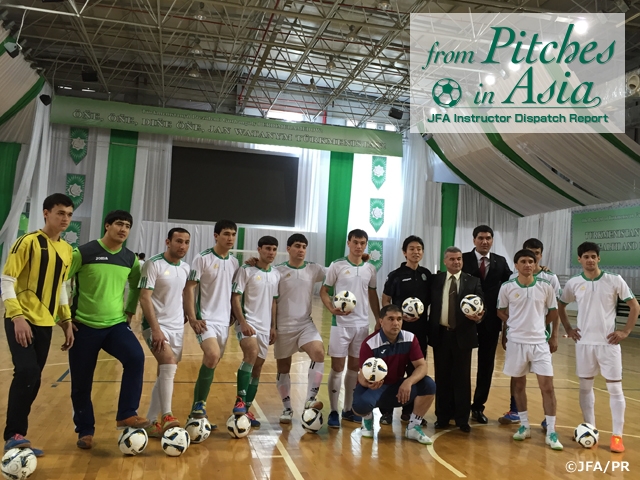 The 23rd edition of “From Pitches in Asia”, in which we introduce the viewpoints of instructors active in Asian countries, was written by Mr. NAKAMURA Kyohei, who works for the Football Federation of Turkmenistan (FFT) as the Coach of Turkmenistan Futsal National Team.

Upon a request by the FFT, I had my first opportunity to coach the national team of the country in November 2011. Then I had other chances to coach the team at the AFC Futsal Championship in 2012 and the Asian Indoor and Martial Arts Games Incheon in 2013.  I had also worked together with FFT for coaching players and holding various seminars in the country. Now since July 2016, I have been based in Turkmenistan and coaching the national team. Our goal is to win a medal at the Asia Indoor and Martial Arts Games 2017, which will be the first-ever and the biggest international sport event held in Turkmenistan.

For this historical international sport event, huge sports facilities and a players’ village have been under construction, and the state-of-the-art arena of the capacity of 15,000 is already built for futsal competition.  While the TFF are eager to win a medal as a host country, the environment of futsal in Turkmenistan is far from perfect. In this country, football is very popular and the players can work out in as good an environment as professional players do. But for the people in this country, futsal is considered as a hobby.  Most of the futsal players are amateur or students, so after some years, they leave the sport. That means the national team is mainly consisted of unexperienced players around 22 years of age. It is very difficult to put those busy athletes together often to hold trainings as a national team. 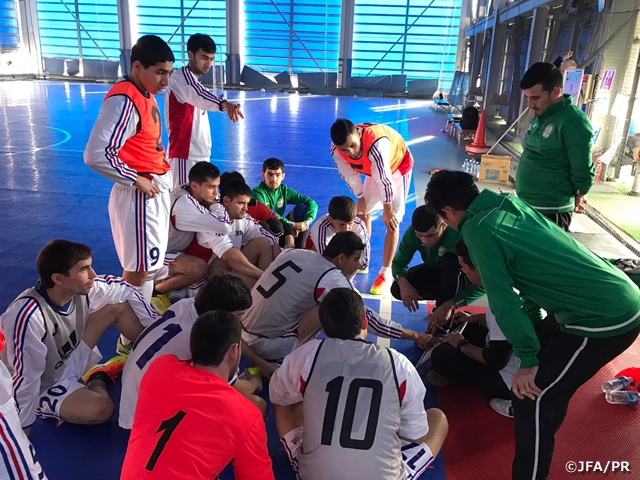 Challenge for Medal in 2017

In order to develop a team in a short period of time, we must intensively solve problems in terms of skills and understanding of tactics. As a non-negotiable condition for me to accept the coaching role, I made a request to TFF to also hire Assistant Coach, Mr. MAEKAWA Yoshinobu who had a lot of coaching experience in Japan and also served as a coaching instructor. Currently, we work together in building development plans and coaching players.

Our players are non-professional and have their work or schools, so not all the players could attend training session of national team every day, and the number of players for each practice varies.  In order to realise the specific style of futsal we envision as soon as possible, we considered that having them go through good practices with their own club is essential.  We have our training session of national team from 8 in the morning, and after that, we visit clubs our players belong to and teach fundamental skills, tactical practice drills and how to design trainings to their coaches.

The players are having better understanding on how enthusiastic we are, and they are becoming more active. They sometimes do not know how to react to the new tactics they had never been taught and the type of training that requires high level of discipline, but some of the hard-working players are making great progress in a short period of time. Assistant Coach, Mr. Maekawa particularly requires discipline and showing 100% of fighting, and it is more like soldiers on battle fields, but that sense of urgency is getting most out of the players and the training becomes very productive.

On the other hand, my role as the Coach is to repeatedly remind them of our mission to get a medal. Nothing can be achieved unless I as a coach do not believe in this difficult mission. I keep telling my players that getting a medal at this tournament is very important for all the people living in this country and also for the entire football in Turkmenistan. I believe that by the time the tournament starts in September 2017 these players start saying that by themselves.

What these internationally-unexperienced futsal players in Turkmenistan needed first and foremost was to experience the“real futsal.” After going through a series of negotiations, we held the first international camp in Fuchu, Tokyo from 17 to 30 November with supports from the Asian Football Confederation (AFC) and the Japan Football Association (JFA).

At first the players were overly excited with Japan’s economic wealth and the fact that convenience stores are peacefully open for 24 hours. They were also surprised with the training environment and high-level of Japan’s futsal such as very detailed tactics and started to fell so into their training. What hyped them up most was watching the highest level of futsal in Japan - F.League matches. Players were envisioning themselves playing in front of a lot of people, and started playing and fighting with a high level of enthusiasm that they had never done.

FFT officials and coaching staff expressed their surprise at the clubs’ management capability such as hiring many coaches and trainers and acquiring sponsors for themselves, the fact that people of both genders and all ages are enjoying playing futsal in Japan, and also the fact that even little kids understand tactics they play. These are the impact we wanted our team to experience through this camp in Japan.

We had no expectation to win a match in training matches in Japan, but we finished with 2 wins and 4 losses. The last match we played against Pescadola Machida, the champions of the All Japan Futsal Championship in March this year, almost turned out to be a big upset with Turkmenistan leading 1-0 with three minutes remaining. I would like to convey my appreciation for all the clubs that gave us this valuable opportunity during their own season and also for the JFA who made this camp possible with limited time for preparation.

In the past, the valuable experience young national team players acquired in Germany became the foundation of Japan’s football.  Time passed, and it is very meaningful that Japanese coaches are now in the position to contribute the development of futsal in Turkmenistan. We sincerely hope that these players will share the experience they had in Japan with future generations. 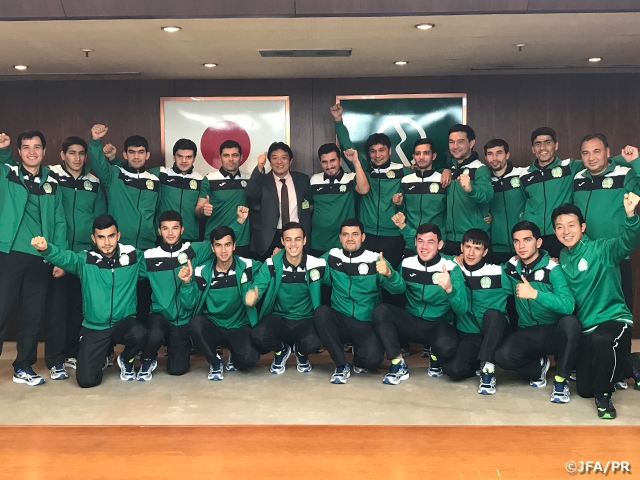