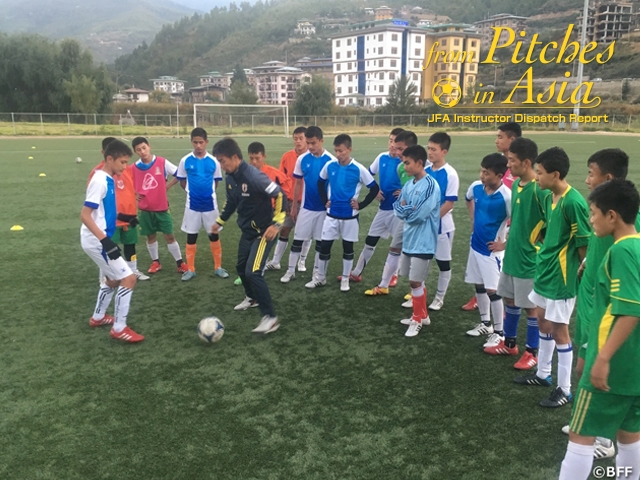 The twenty-second edition of “From the Pitches of Asia”, in which we introduce the viewpoints of instructors active in Asian countries, is written by LEE Song Jun, the Coach of U14/U-17 Bhutan National Team of the Bhutan Football Federation (BFF).

It’s been six months since I came over to Bhutan, my everyday-life is very comfortable. Bhutan is a country richly endowed with nature and full of picturesque scenery. The people here are very kind and friendly. I struggled with the language and blackouts just after arriving here, and the number of stray dogs as well as cows and horses astonished me.

One of the biggest differences in customs, which confused me, is the angling of one’s head. Although it implies ‘question mark’ in Japan, it means “yes” in this country, and I had no idea of this gesture at first.  During a practice session, I asked a player, who had been taken down, whether he was fine and could continue playing. He angled his head. So I asked him again if he could not judge the severity himself and he had any pain. He angled his head again. I asked once more, but the answer was the same. Then, all of sudden, I realised from expression on his face that he meant ‘yes’.

In one meeting prior to a game, I told the players about this habit: ‘since football is an international sport, let’s stop angling your heads to say ‘yes’ on the pitch, so that anyone from around the world can understand yes or no.’ When I asked ‘do you understand? Is that ok?’ all the players showed their agreement by angling their head toward the same direction. I just laughed. It was me that had to understand and adjust to their local habit.

One of their strengths is to be flexible. They try to take on everything I coach.  Although there is still room to improve in their ability to complete tasks, apply skills, and the spirit of self-sufficiency, they believes in me and practice hard. I, as a coach, feel grateful as well as responsible for them.

The academy of the Bhutan National Team participate in the domestic league ‘Thimphu League’ from the beginning of April to the middle of June. They practice, avoiding examination periods in schools. The 2016 pupils of the academy were dismissed in November, and a selection for a new team will be held in the end of December, so that the 2017 team can start their activities in February. The most important things for these age categories in this country are school events.

There are many events, not to mention studies. As the period, in which we can play matches, is limited, we have problems in staying competitive, challenging tasks, and experiencing success. During the season this year, we went on a domestic tour. I did not categorise players by age. Every fortnight, I divided them into two, team A and team B, to hold practice sessions and to play games.

I instruct the developing generation, focusing on ‘small steps’ rather than ‘big changes’. I keep reminding the players of tidying up equipment, cleaning the pitch, checking the air pressure of the ball, and their appearance off the pitch. I ask them on the pitch ‘to always think about games’, ‘to aim to achieve something in every single play’, ‘to find reasons for success and failure’, and ‘to learn from mistakes for better results’.

As a result, we succeeded in reducing careless mistakes and increasing the variety of plays with better movement. The players are often seen proactively picking up rubbish and putting it in a bin on and off the pitch. Although it is rare for people in Bhutan to express opinions against elders, I’m trying to encourage them to enjoy taking the initiative to lead and understand the importance of delivering thoughts. 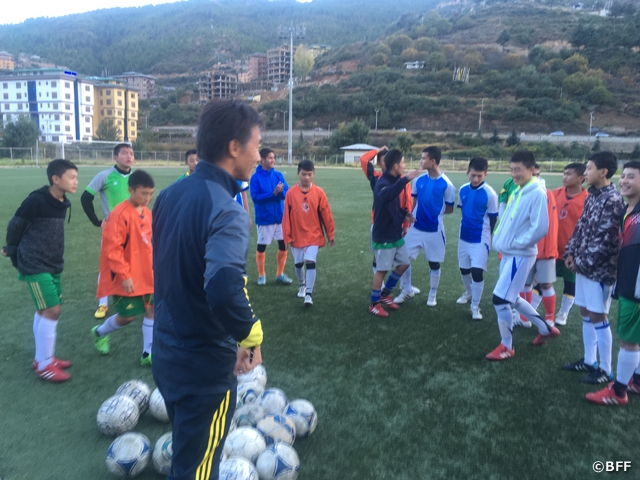 Regarding the Kumamoto Earthquake in April, we displayed a message banner on the pitch of the Thimphu League to express our heartfelt sympathy from U-17 Bhutan National Team to the people of Kumamoto. I used to play for Mito HollyHock and experienced the Great East Japan Earthquake in 2011, and I considered what I could do from Bhutan and proposed the BFF to ‘send a message to Japan prior to games of the Thimphu League’, which they readily agreed to.

I discussed it with the Japanese living in Bhutan and the headmaster of the Japanese school, and we made a banner with Bhutanese pupils, teachers, and players. On the day of the game, many Bhutanese and Japanese, who work there, came to the stadium to pray. The music of ‘Tashikana koto (Something Certain)’ by Oda Kazumasa was played and there was a warm and emotional atmosphere at the Changlimithang Stadium. I felt the strong friendship and support of the Bhutanese towards Japan. 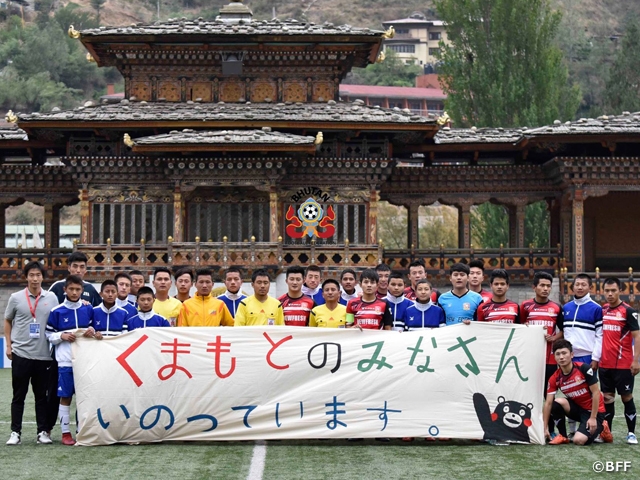 Japanese instructors have succeeded in achieving many legacy in Bhutan. One of them is to improve discipline and attitude in football, and expanding the possibilities to have a positive impact on Bhutanese football, including techniques and tactics. The staff of the BFF, former players (current coaches) and players tend to talk happily: ‘it used to be like this’ and ‘this kind of thing happened before.’ Above all, they respect the football in Japan -  including the Japan National Teams, the J.League, and the activities of JFA.

The Bhutanese players are good at trying hard for immediate challenge. However, they are not used to continuing to make an effort to achieve long-term aims or working on something to improve. I’d like them to learn a pattern of continuing and achieving aims, even with something very simple. Also I’d like them to be able to learn and improve from failures.  Together with Bhutanese people, I would very much like to make my best effort for the development of the players who will lead this country.