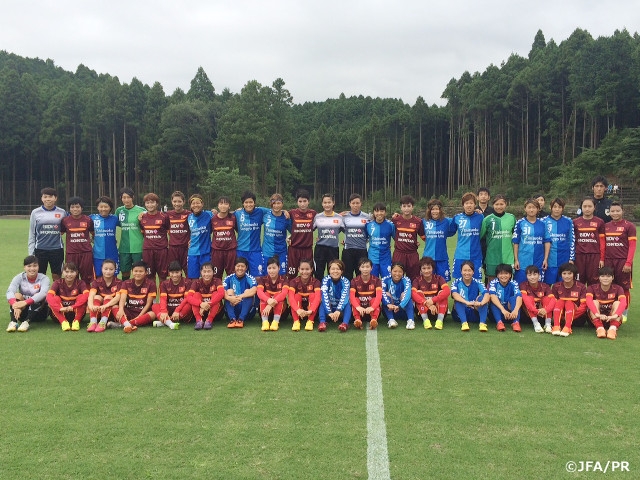 The Japan Football Association accepted the Vietnam Women's National Team for holding a training camp in Tokinosumika, Shizuoka Prefecture between August 24 and September 4. Japanese NORIMATSU Takashi leads the team as coach. The team, who arrived in Japan with 8 staff and 32 players, played a total of four training matches to get ready for the second Asian qualifying of the Olympics.

In a game against Shizuoka Sangyo University on 26 August, the Vietnam launched a cross from a side. The Shizuoka Sangyo goalkeeper punched it, but a Vietnam player put it back in the goalmouth to strike first.They entered halftime retaining the lead.

In the second half, Shizuoka Sangyo took the pace of the game, but Vietnam showed a physical defence and then it became a see-saw contest. After all, both sides scored a goal apiece and Vietnam ended up winning it 2-1.

Three days later, on 29 August, Vietnam took on Nojima Stella Kanagawa Sagamihara. Vietnam was overwhelmed by Nojima Stella's quick passing and attacking, but eventually created some offensive chances. Nojima Stella scored on 42nd and 56th minutes and ended the contest with a 2-0 win.

Vietnam faced Urawa Reds Ladies on 1 September. The teams exhibited a competitive game, creating some chances, but neither scored goal before they entered halftime. In the second half, Urawa, who substituted their members, scored a goal one minute into it.

They put up a game with quick transitions between their offence and defence. Vietnam tried to catch up with Urawa, making some critical scoring opportunities, but weren't able to connect them. Urawa won 1-0.

Vietnam then played against JFA Academy Fukushima on 3 September. They allowed Academy Fukushima to connect short passes and make a shot to give a lead before halftime. Norimatsu told his players to score a goal before they entered the second half, and then they scored on 48th and 59th from aggressive attacks.

Both teams didn't add any more goals as Vietnam ended their training matches with a 2-1 win.

The Vietnamese players saw some sights between their training and the players and staff were moved by the Japanese cultures and atmosphere.

The Vietnamese Women's National Team will face Chinese Taipei, Thailand, Myanmar and Jordan in the second Asian qualifying for the Olympics. Their first match against Chinese Taipei will be played on 14 September in Myanmar. 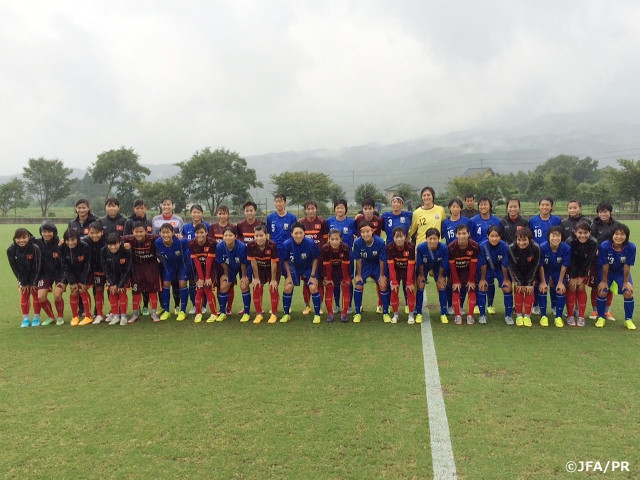 NORIMATSU Takashi, Coach (Vietnam Women's National Team)
Our training camp in Japan was successful overall, but because the weather was cooler than we expected, I'm a little worried that how it will affect our performance in the qualifying in 10 days.

I'm extremely pleased that we were able to hold the camp in great circumstances with the support of the JFA. We were able to have goalkeeper's coach take a lecture during the stay, so it gave an extra benefit to us.

On the four matches we played, we played teams with different levels and characters, and they were very training for us, because a lot of Southeast Asian teams have their own traits and you need to flexibly adjust to those opponents rather than you try to play your own style of ball.

We would like to give all out in the second Asian qualifying for the Olympics so we will have the results we want, taking advantage of what we learned in this training camp.

Nguyen Hai Hoa (Team Captain)
During our stay in Japan, it was interesting that we were able to play four training matches against club teams of Japan, who became the world's best in 2011 while we also experienced some of the Japanese cultures.

By playing against the Japanese teams, I was able to find another phase of football. The team is developing technically under coach Norimatsu toward the upcoming qualifying, so I would like to play giving all out and put up some results.