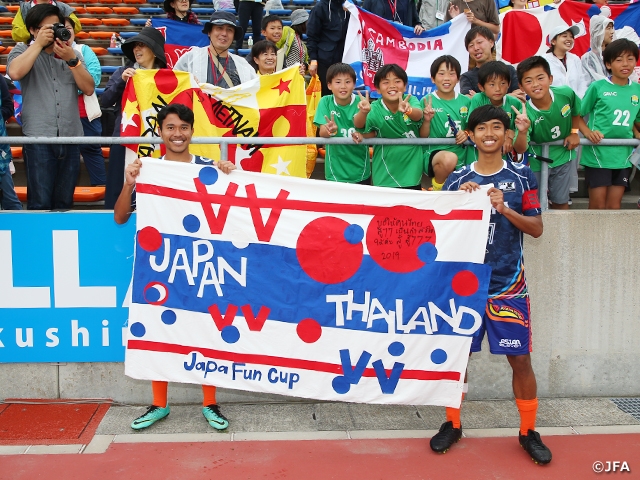 In order to share the activities carried out by the Committee for Social Responsibility, we have started a relay column by the members of the committee. To start the relay, we will share the article written by Chairman HIBINO Katsuhiko, who is also the Dean of Faculty of Fine Arts at the Tokyo University of the Arts, where he wrote about the Match-Flags seen at the JapaFunCup held last month at J-Village.

A Match-Flag is a single flag that supports the two teams playing in the match. A match can only be played with an opponent, and the flag is created by imagining the two countries, two teams, and the day where the players gathers in one location for the love of the game. These players will meet because of football. The Match-Flag emphasises the cultural exchange aspect of the sport. On 22 June, with the support of the Japan Foundation Asia Center, the JapaFunCup was held at J-Village in Fukushima, where selected players from 11 countries of Southeast Asia formed the “ASIAN ELEVEN U-18” and played a match against the U-18 Tohoku Select Team. At the match, the stands were covered by the Match-Flags. Designed by the students of Tokyo University of the Arts and the general public participants who were at the Laos Festival 2019 held at Yoyogi Park, we have created a flag that is 110 cm in height, 180 cm in width, where the national flags of the 11 countries and the Japanese flag were integrated. 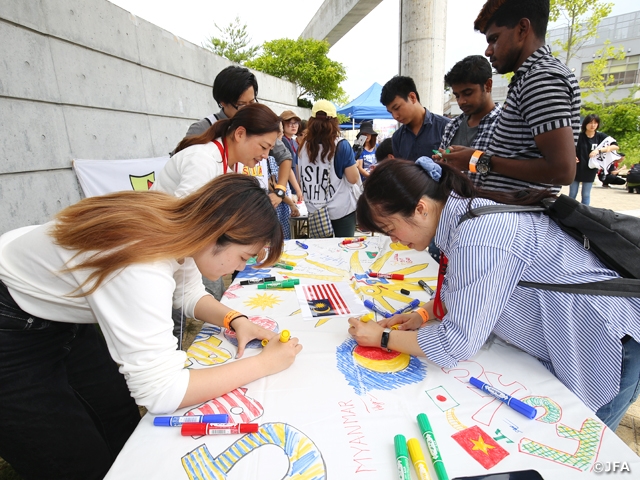 On the match day, the 90 participants who were involved in creating the Match-Flag all gathered at Tokyo University of the Arts in Ueno and made their ways to J-Village on a chartered bus to cheer on the players with the flags they have created. For many participants, this was their first ever football match they’ve watched. While many looked hesitant to cheer on the match, they eventually created a chant where they yelled, “Tohoku!! ASIAN!! Tohoku!! ASIAN!!” and picked up their enthusiasm to wave the flags. With the support from the crowd, both teams showed a heated battle that went into penalty shootouts after playing 90 minutes of regulation time, and it was the ASIAN ELEVEN who prevailed at the end to earn the JapaFunCup champion’s trophy. Following the ceremony, the players of the ASIAN ELEVEN came towards the back stands to thank the crowd, as each player waved towards the supporters holding their country’s flag. Following this moment, perhaps the most exciting and impressive scene of this project was created, as the creators of the flags handed over their flags to the players. 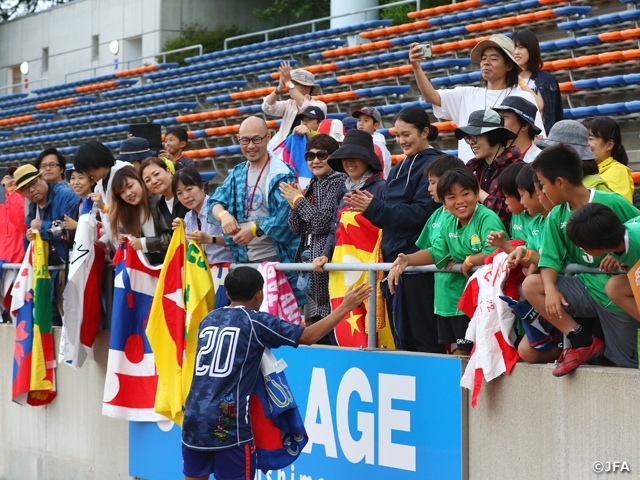 The players were caught in surprise, as they weren’t sure if they were really allowed to receive the flags, but after the flags were presented to them, the players celebrated their victory with the Match-Flags that had the designs of their own countries along with the Japanese flag. A wonderful scene was created, as players of different ethnicities danced around the green pitch while holding the colourful Match-Flags, and to my eyes, the Match-Flags looked even more beautiful, passionate, proud, and radiant. Some creators had tears in their eyes, as they watched this scene. Players from different countries gathered in Japan to meet their teammates, built a team, played a match in a stadium filled with the Match-Flags, earn the victory, interact with the supporters after the match, and wrapped themselves in the Match-Flags with their countries’ design. All this was made possible because of football. Once these players return to their countries, they will see the Match-Flag and remember Japan, Fukushima, J-Village and the supporters at the match. The Match-Flag is tool that can connect people, countries, and memories.

*We will be sharing the article from Ms. KURODA Kaori in the next Vol. (Scheduled for mid-August)