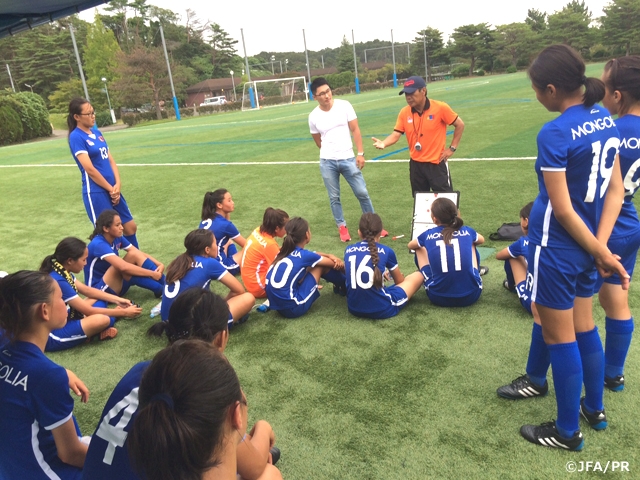 The U-14 Mongolia Women’s National Team arrived in Japan on 12 August to have a training camp in Miyagi. Overseas dispatched Official JFA Licensed Coach IKI Yoji has been the Coach of the team since February of this year. The team is the first women’s national team in Mongolia. Their first-memorial overseas match was against Vegalta Sendai Ladies Junior Youth; it was a bitter start for them with the result of 0-24. On 14 September, they lost another match against Seiwa Gakuen High School 0-10, however they fully enjoyed visiting Mongolian yokozuna (sumo wrestler) Harumafuji, and watching the J1 League match Vegalta Sendai vs. Kashiwa Reysol.

On 15 August, their 4th day of the camp, the team had another match against Marysol Matsushima Junior whose players are U-12 male players. The match is played in 20 minutes X 3 sets, and they were beaten 0-2, but they corrected the issues found in the 2 previous matches that they had lost and got closer to the box with short passes.

Iki, the Coach of the U-14 Mongolia Women’s National Team, leads the team with a lot of passion which is reminiscent of the days when he used to coach Tohoku Gakuin High School Football Club, by directing the players with a loud voice using 3 languages: some of Mongolian that he has just learned, English, and Japanese. The players tried their best to respond to his passion on the pitch.

In this camp, 4 Mongolian referees came with the team. On 15 August, Mr. NISHIMURA Yuichi, who officiated in 2010/2014 FIFA World Cup, unofficially participated in the session for them. During the match, he followed just behind these referees to share the experience and knowledge such as positioning. After the match, he had another session for 1 hour for the Mongolian coaches to teach what to be careful of at free-kicks. Mr. NISHIMURA is a star for them; these 4 Mongolian referees were very excited even after the session saying “this is like a dream”. They got his autograph and took a memorial photo with him. 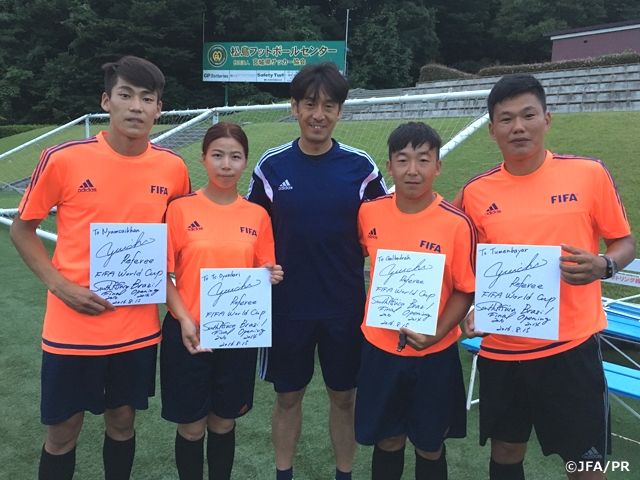 On 16 August, the team and the group of referees had courtesy calls on Matsushima Town Council, Miyagi Prefectural Government, and The Kahoku Shimpo Company. The team was welcomed by the applause of all of staff at the Matsushima Town Council, and the Mayor of the town SAKURAI Koichi had a welcoming speech to encourage the team. They then had some off-time by going for shopping and visiting an aquarium.

The team will have 4 more practice matches before going back to Mongolia on 21 August.

Ulziibayar Badamkhatan, Captain
We feel that we have improved our quality every time we experience matches against various teams in Japan. There is no trash on the street in Japan and everybody is kind to us – it is very comfortable for us to stay in Japan. At first we couldn’t enjoy Japanese food but now we have been more familiar with them.

Doljinsuren Tumenbayar, Mongolian referee
Since the 2010 FIFA World Cup, Mr. NISHIMURA Yuichi has been my hero with respect, and it is just like a dream that I could learn directly from him. Now I want to share what I have learned from him with my referee colleagues in Mongolia as soon as possible. 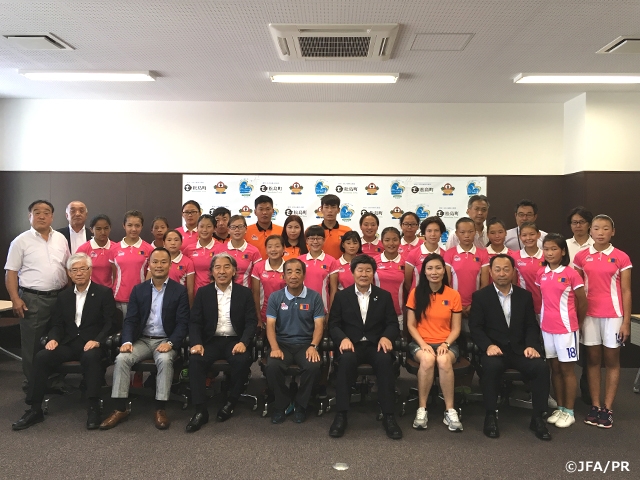