Close
HOME > CSR > Selection > Report > NEWS > “We want the boys in the affected areas to take over the Tohoku Spirit” 10 years since the Great East Japan Earthquake – Relay Column Vol.5

“We want the boys in the affected areas to take over the Tohoku Spirit” 10 years since the Great East Japan Earthquake – Relay Column Vol.5 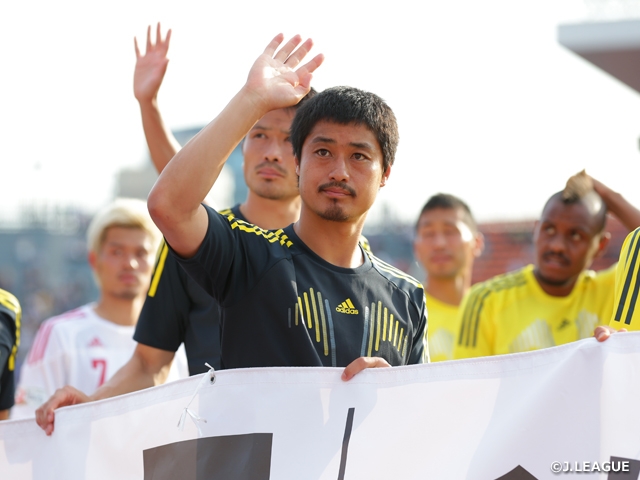 As our fifth column, we will share the stories told by Mr. OGASAWARA Mitsuo, who is one of the founders of the “J.League Players with Tohoku Spirit.”

Motivations to take action can vary. In some cases, one’s affection towards their hometown can be a huge factor. In the aftermath of the Great East Japan Earthquake, people from all over the world reached out to provide support. From the Japanese football world, players related to the Tohoku region took the lead and showed their devotion in the reconstruction activities.

Everyone is aware that something tragic has happened. However, the impression can be vastly different between those who saw the tragedy through the TV screen and those who visited the site. If anyone had set foot in the affected area following the earthquake, there was definitely something that would strike one’s heart. It is the sadness of the victims which could be heard without them raising their voice.

At 2:46 p.m. on 11 March 2011, Kashima Antlers’ Mitsuo Ogasawara was on the team bus heading to Tokyo Station. He was traveling with his team ahead of their match in Shimizu on the next day. After feeling a big shake, he saw the images that were shown on the installed TV and figured that something extraordinary was happening. He immediately tried to contact people he knew in Iwate but couldn't reach them at all. It took him a few days to confirm their safety.

He wanted to rush to Iwate right away. However, emergency vehicles had to be prioritised to enter the disaster area, and it took a week before he was allowed to enter the site. The scene on the way from Kashima did not change much until he entered the tsunami-stricken area. All the buildings that were supposed to be there had disappeared. His mind went blank after seeing the shocking view.

“Cars were flipped upside down all over the place. When I went to the evacuation centre, many people were still walking around barefooted. It left a strong impression that something terrible had happened. I immediately realised that it was not a problem that could be solved by an individual effort.”

The earthquake occurred immediately after J.League’s season opener, and the league had to suspend the season for about a month and a half. Ogasawara utilised the break to make frequent visits to the affected areas to deliver relief supplies. That was when JFA announced that they will hold a charity match at Osaka on 29 March. The charity match featured a fixture between the SAMURAI BLUE (Japan National Team) and the J.League select team “TEAM AS ONE.” Ogasawara was requested to participate as a member of the J.League select team.

At first he refused the request. He had been too occupied with the relief efforts at the affected areas, that he hadn’t been sleeping nor eating enough. It was the voices of the affected people that changed his mind. The people at the evacuation centre were not able to get information because their mobile phones were not charged. And they kept telling Ogasawara, “I always enjoyed watching you play football.” and “Are you still playing football?”

“It was during a time where I felt the limits to what I could do by myself. If I can make people happy by playing football, I thought it might be a good idea for me to participate in the charity match. Although I couldn't play well, I remember feeling good about doing something.” 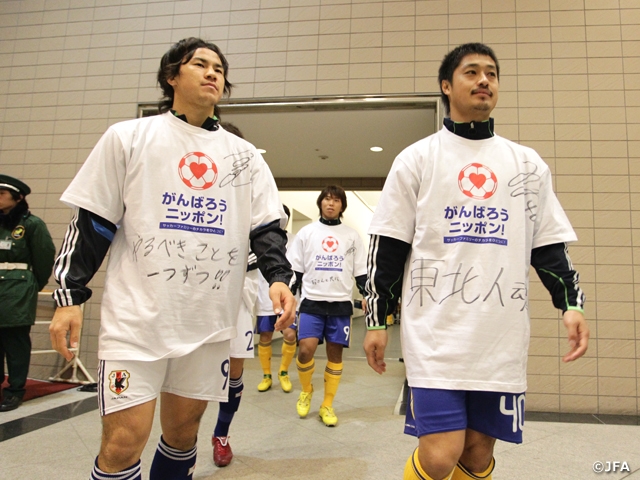 Immediately after the earthquake, he started to contact J.League players and related parties that were from the Tohoku region. The group expanded to about 30-40 people. That was when he received a call from KUMABAYASHI Shingo (Blaublitz Akita), offering to cooperate, “I'm not in the disaster area, but can I do something to help?”

Until then, the relief activities were mostly carried out by individuals, but from there on, it shifted to group activities. On 13 May 2011, “Tohoku Spirit” was founded by six active J.Leaguers from the six Tohoku prefectures to provide reconstruction support to the affected areas.

For Ogasawara, the presence and voices of the football kids were the driving force behind his activities to provide support. Tohoku Spirit’s initial relief supplies were mostly football equipment such as balls, spikes, and uniforms, as they collected the items and delivered them to the affected areas. The members took advantage of their football network to distribute those supplies to various sites.

In the case of Ogasawara, he was able to gain support from his former classmates and teammates of Ofunato High School, people involved in football, and the city officials. Among them, SAITO Shigenobu, who was his teacher in high school and is currently the head coach of Morioka Commercial High School, had a huge presence.

“Mr. Saito lives in Morioka, which was not affected by the tsunami, so we sent the supplies to Morioka Commercial High School. Mr. Saito would load the supplies on a truck and drove 2-3 hours to deliver the supplies to the affected areas. He basically became the courier service for us. He has many acquaintances in the region, so we were able to distribute the supplies to various locations. I have nothing but gratitude for him.”

Ten years have passed since the earthquake. What is needed in the region is no longer supplies anymore. But through the activities carried out over the years, Ogasawara mentioned that he and his group have nurtured a common feeling.

The group is currently planning on holding various competition at various sites. Through these competitions, they hope to promote active interaction between people.

“We have taken the youth kids of Kashima Antlers to the affected areas in Tohoku to make them learn what actually happened. I don't want to say this, but if you look at the history, it is inevitable that we will see more tsunamis in the future. What we do in those situations are what’s important. And that is something we must learn from our past experience and pass it onto the next generation.”

There will be no casualties in the event of a future disaster. As long as we are alive, we can alleviate the voices of distress. Because Ogasawara has seen the site shortly after the earthquake, his words are much more meaningful. 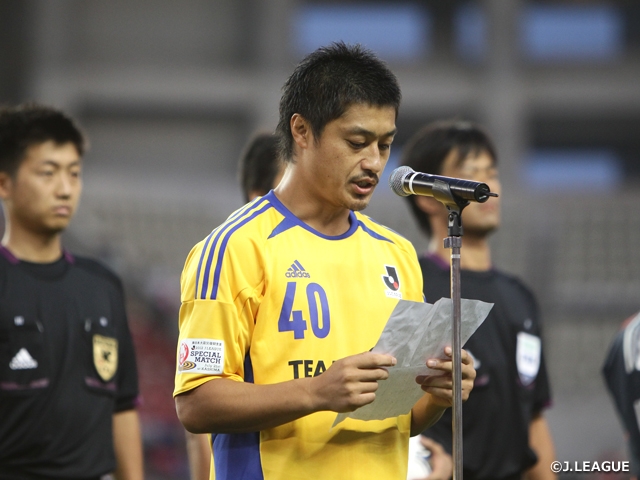 HOME CSR Selection Report NEWS “We want the boys in the affected areas to take over the Tohoku Spirit” 10 years since the Great East Japan Earthquake – Relay Column Vol.5