Close
HOME > CSR > Selection > Report > NEWS > “The smiles of the children taught me what it means to coach” 10 years since the Great East Japan Earthquake – Relay Column Vol.4

“The smiles of the children taught me what it means to coach” 10 years since the Great East Japan Earthquake – Relay Column Vol.4 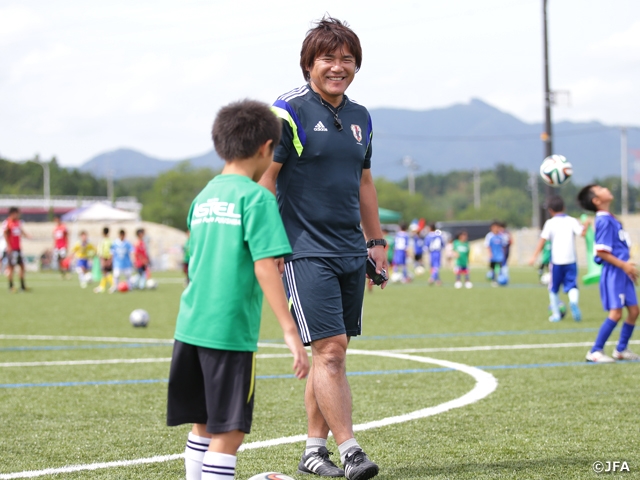 As our fourth column, we will share the stories told by Mr. TEGURAMORI Hiroshi, who was appointed as the JFA Reconstruction Support Coach from January 2013 to January 2016. 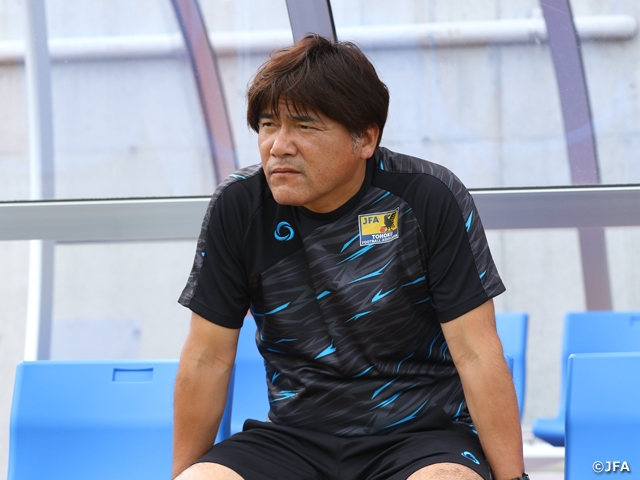 Teguramori has something that left a strong impression. In January 2013, he took over the role of the JFA Reconstruction Support Coach from his predecessor, KATO Hisashi, and to this day, he vividly remembers the scene he saw at the affected areas of the Great East Japan Earthquake.

In order to play football, you need at least a ball and some marker cones, but there was nothing prepared on site. All he had was a single ball, which left him with very limited options. Fortunately, however, it was also true that children loved to play a scrimmage.

Without any explanation, he threw the ball into the open space, and said, “Let’s go.” A big change was apparent soon after, as the children started to share some laughter, even though they had gone through difficult times because of the earthquake. Their faces were turning bright red, they were all breaking a sweat, and looked very happy.

“It's just one ball, and it made everyone smile. We didn't need words there. Football connected me with the children. I felt the power of football and I was happy to be a part of it.” 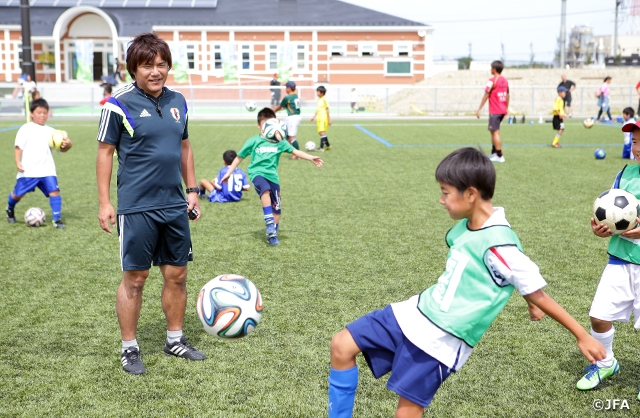 Teguramori was born at Gonohe, Aomori. Although the earthquake caused great damage to houses along the Pacific coast and to their fishing facilities, casualties were limited in Aomori Prefecture. But for Teguramori who resides in Sendai and also have coached for Montedio Yamagata and Vegalta Sendai after retiring as a player, had special feelings for Miyagi prefecture and the Tohoku region, which were severely damaged by the tsunami. That is why he had no reason to decline the offer from JFA to support the reconstruction efforts in the affected regions.

Unlike the turmoil seen immediately after the earthquake, the affected area was gradually regaining its daily life after two years. As Teguramori visited each site, most of the teams were able to conduct their normal activities. With support coming from all directions, clothing, shoes, balls, and other equipment went around for most teams, but there was one thing that was missing, and that was the goal. With many of the goals being lost due to the tsunami, there were growing demands for a new goal.

Even though the budget was limited, Teguramori made promises saying, “I will make sure to notify JFA and the J.League.” He was not in position to make the decisions, nor did he know the actual budget for the project, but he was committed to keeping the promises he made with the children. It was up to the adults, and it was JFA and the J.League that cooperated to make those promises to reality. At the end of March 2014, football goals were donated to each area in order to improve the football environment in the affected areas.

However, not all activities went the way he planned for. Sometimes his heart wavered and was unsure what to do. At the time, many of the activities took place at spaces where temporary housings were being built.

“When playing football at such environment, there were adults who got angry at the children. Even though the children are having fun, I was saddened to see such adults. But when you put yourself in their shoes, it must have been tough for them to be living in a temporary housing, and they had to let their frustration out in some way. So it was a tough dilemma.”

Teguramori was known for his strict coaching style when he coached for Yamagata and Sendai. But his approach changed 180 degrees after he became the Reconstruction Support Coach. This is because he became more conscious of choosing words for children affected by the earthquake. Rather than getting angry, he tried to praise good plays.

“By complimenting people, you gain a sense of comfort yourself. Coaching is not just about being strict. Although I was there to coach the children in the affected areas, it was me who was taught a lesson, as the smiles of the children taught me what it means to coach. It felt like I gained a priceless life lesson.”

In February 2016, Teguramori saw his title change from Reconstruction Support Coach to JFA Regional Youth Director/JFA Training Centre Coach. Currently, he is the JFA Regional Director for the Tohoku region, and is in charge of the A-class general, A-class U-12, and B-class JFA Courses as a coaches training instructor. There are always smiles on the pitch when football is being played, and that is because a single football can bring magic to everyone involved. 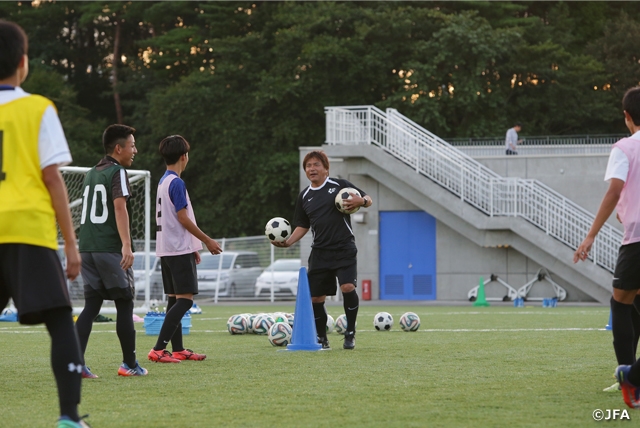 HOME CSR Selection Report NEWS “The smiles of the children taught me what it means to coach” 10 years since the Great East Japan Earthquake – Relay Column Vol.4