Coach Halilhodzic: We give all out to win – Asian final qualifiers match against Saudi Arabia 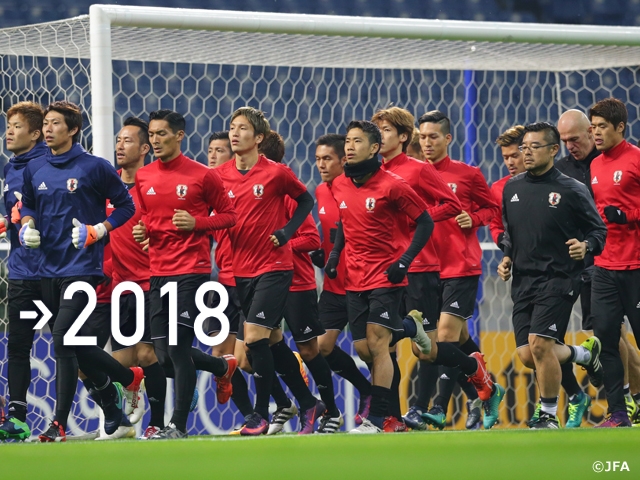 At the press conference held at the Saitama Stadium on Monday 14 November, Vahid HALILHODZIC, coach of SAMURAI BLUE (Japan National Team), convincingly stated his determination towards the fifth match of the World Cup 2018 Asian final qualifiers against Saudi Arabia to be held on the following day. “This is a very important match that leads to our advancement out of the qualifiers. We will give all out to win.”

Japan are now at third place with two wins, one loss, and one draw for a total of seven points in six-country Group B, while Saudi Arabia are leading with ten points they earned out of three wins and one draw. Automatic advancement to the World Cup will be given to the two best teams in the group. As second-placed Australia with two wins and two draws are also trailing Saudi Arabia only by two points, a win and three points are highly expected for Japan to squeeze out of the last national team match they play this year.

Coach Halilhodzic also said “Saudi Arabia have improved in the past few years in terms of tactics and physicality. Especially on the offensive end, they always have good talents. They are confident. I know it will be a difficult match, but we have prepared ourselves thoroughly both on and off the pitch.” He is certain his squad have gone through an excellent training camp from 6 November including the friendly match against Oman on the 11th. 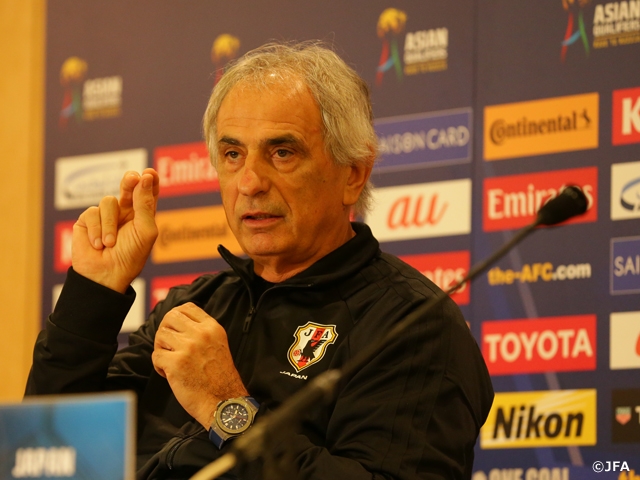 Then, the boss emphasised that total team efforts are required, and he expressed his trust and expectation for his players. “We will go all out with a strong determination and concentration, while I fully understand that both experience and confidence are needed. A team doesn’t consist of just starting eleven players. Our subs are vital strategic options for us to win. I expect them to play to the best of their abilities.”

The team on the day had an official training at the match venue, closing the door except for the first 15 minutes in order to review their tactics one last time.

Midfielder HASEBE Makoto (Eintracht Frankfurt/Germany) said “I think the importance of this match has certainly been felt within the team. We all have to show our fighting attitude both offensively and defensively.” Forward OSAKO Yuya (1.FC Koeln/Germany), who had been playing well including scoring two goals in the Oman match, added “we were able to practise for tomorrow with a good motivation. What we have to do now is just go out and play.” 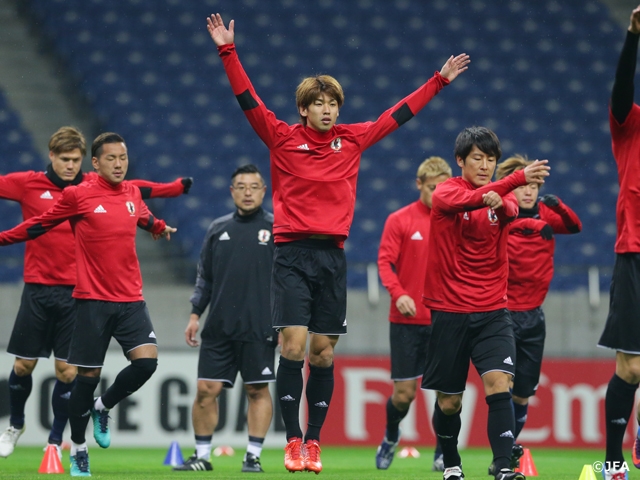 On the other hand, Saudi Arabia’s coach Bert VAN MARWIJK said “we always play to win, and that attitude never changes no matter where we play. I am confident that we will play good football.”

Van Marwijk, coaching Saudi Arabia since last summer, had an experience to lead the Netherlands to the second place in the FIFA World Cup 2010. He faced and won against Japan at the group stage of that World Cup and one more time in an international friendly taken place one year prior. “I know Japan are a quality team. They know our quality as well. But I suppose bigger pressure is on them.”

Japan’s Hasebe is composedly aware of the situation, saying “we have to win at our home, but we can never lose, either. We have to make sure to control the risks.”

The match is scheduled to kick off at 19:35 at the Saitama Stadium.

Vahid HALILHODZIC, Coach
Tomorrow, we will give all out to win. For that, we have trained ourselves. Saudi Arabia have improved in the past few years in terms of tactics and physicality. Their individual quality is there and, especially on the offensive end, they always have good talents. We play at our home, so we want to attack and score goals, but we can’t let ourselves fall into their traps. We need experience and confidence. We can’t commit unnecessary fouls. We must make sure that we keep attacking, remain organised and do not let the opponents go on their counter-attacks.

The opponents are confident as well and I know it will be a difficult match. But my players are concentrated and have enough quality to win. By reviewing the match against Oman and the tactics during the training camp, I spent a lot of time thinking about who to start. I want to select the best team possible to get a good result. A team doesn’t consist of just eleven players. Our subs are our ‘jokers’. They are vital strategic options to win. I expect my eleven starters and three substitutes to play to the best of their abilities. This is a very important match that leads to our advancement out of the qualifiers. We will go all out with a strong determination to grab the win.

MF HARAGUCHI Genki (Hertha BSC Berlin)
I think good results will come if we play with confidence and trust our teammates. On the national team, I get to play in a more attacking role, so I am looking forward to it very much. I think I will have scoring opportunities. But at the same time, even though I don’t score goals, it’s fine if I get to be one of the guys who play for the team’s win in the end. I consider this match to be very important. In the Oman match, with Osako in the line-up, we were able to attack differently and now have a wider variety of plays. I want to keep playing as I give my thoughts to those aspects as well.

FW OSAKO Yuya (1.FC Koeln)
I think they will play aggressively on the ball to certain extent, but I am playing in Germany where it’s very tough as well. I will compete without backing down. Forwards are supposed to scare the opponents, so I want give them an impression like “he will shoot once he gets the ball.” If every one of us beats the opponents in one-on-one situations, the possibility of us winning the match goes up. I am looking forward to playing against these opponents and I want to show what I can do in those battles.

MF HASEBE Makoto (Eintracht Frankfurt)
Today’s practise was full of sense of urgency. I think the importance of this match has certainly been felt within the team. Saudi Arabia played the last two matches confidently because they won the first two matches. They are well organised as a team and we have to be aware that there will be some stretches where we have to be very patient. I don’t know who gets to play tomorrow, but we all have to show our fighting attitude both offensively and defensively.

GK KAWASHIMA Eiji (Football Club de Metz)
We lost the first match of the final qualifying round, so this Saudi Arabia match is very important. But no matter what the situation is, it’s a home match. Regardless of the fact that the opponents are Saudi Arabia and group leaders, we want to play with a strong mindset ‘not allowing the opponents do anything on the pitch’. In a situation like this, what we need is extra push on the back. If every one of us plays with confidence, small difference can make a change in a team and in matches. There are many players on this team who have experienced the World Cup qualifiers before, but I want the young players on the team to play to the best of their abilities.