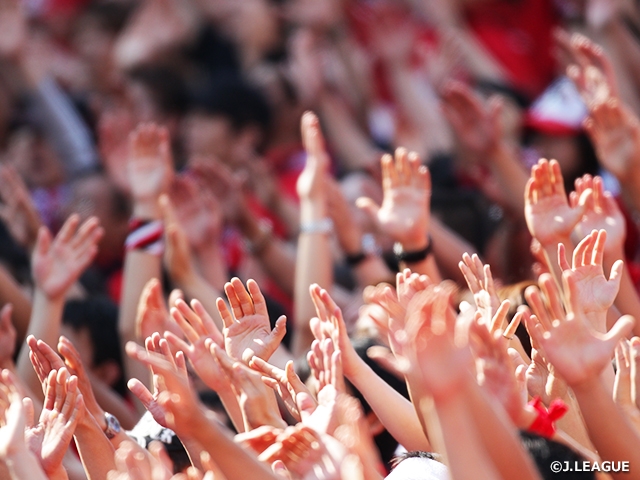 After the suspension of four months, J.League has finally returned.

However, in the first two match-day games were played without spectators. And the following fixtures were also played under severely restricted number of spectators. The restrictions are scheduled to be eased in August, but it all depends on the situation surrounding COVID-19 and it goes without saying that the restrictions will not be lifted completely. It would not be for a while until we see the supporters waving the flags, chanting as a group, and share the joy of goals and victories by hugging each other at the stadium.

In Japan, supporters were born in 1992, when “J.League Yamazaki Nabisco Cup (current YBC Levain Cup)” kicked off as the first official tournament of the J.League. There were many factors that led the J.league to its success, but the fact that each stadium was packed with supporters who cheered their club colourfully, lively, and with great joy, must have played a key role in the league’s success.

At the time, there was a major issue regarding the “hooligans” who engaged in violent behaviours in and outside football stadiums worldwide. The Japanese supporters, born during this era, have chosen to see the hooligans as a negative example, as they restrained themselves from getting violent, and built the foundation of today’s wonderful supporting culture. People all around the world are surprised when seeing supporters of two opposing sides peacefully sharing the same train following a match, regardless of the match results.

“Supporters of ○○ (visiting club name), welcome to our stadium!”

At some stadiums, there are such announcements made before matches, and the home supporters would send a big round of applause.

Cheer songs sung by the supporters are usually composed by the supporters themselves, and they are all intended to support their club, not to taunt or attack the opposing club. The most you would see is perhaps some booing from the crowd.

When FC Tokyo was promoted to J1 in 2000, I visited Kashiwanoha Stadium to cover their away match against Kashiwa Reysol. Before the match, the supporters of FC Tokyo started chanting the following:

It was a chant that called out the opponent’s home being countryside, while bragging about their home being a mega-city. However, it was the Kashiwa Reysol fans who seemed to appreciate the chant the most, as they laughed and responded by sending an applause back. It may have been humiliating for some Kashiwa supporters, as their core members could only respond by splashing water at each other while wearing just white briefs. The match entered into the extra time with a score of 2-2, before Kashiwa’s defender Hong Myung-Bo scored the game winner in the second half of extra time, giving a gratifying result for the home supporters.

As seen following the Great East Japan Earthquake, Japanese supporters have shown wonderful sense of solidarity by actively getting involved to send relief supplies to other clubs’ hometowns when they are affected by natural disasters. At the stadium, the club’s victory is their top priority, but deep inside, every supporter knows that all supporters are “comrades” that supports their own local clubs. Every once in a while, we hear stories about opposing supporters clashing against each other, but for the most part, they always pay respect to each other.

While J.League restarted and the crowds are slowly returning to the stadiums, the supporters are still forced to be patient for a while. In fact, their patience might be tested even more, because the matches have resumed.

The presence of fellow “comrades” can be valuable during these tough times. Clubs are planning to carry out projects to deliver the voices and emotions of their supporters to their players. With the current technology, it is possible for the opposing supporters to combine with each other and conduct a cheering competition while watching the match. It is time to see the fellow “comrades” work together to make the most out of this unique time.