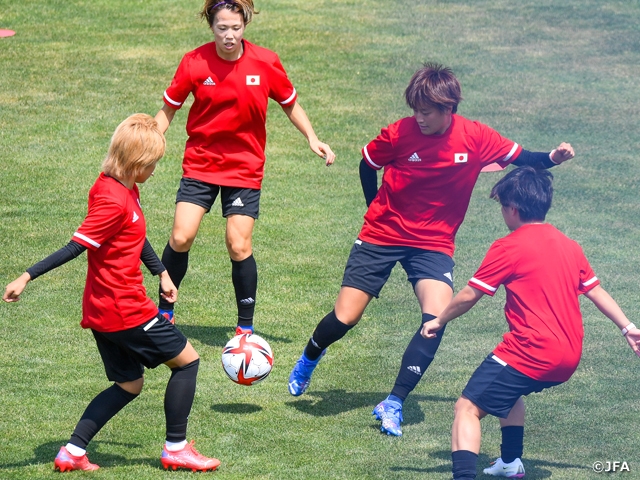 The training session was held in the morning, in which the first 15 minutes was open to the media. The players were seen going through their warmup routines before spending time to go over their set-plays. The team then visited the match venue in the afternoon, where the players checked out the pitch condition, while also observing the atmosphere of the dome stadium, which most players have never played in.

Coach TAKAKURA Asako appeared in a press conference, where she described their opponent as “a proven team with great track records,” and shared her aspiration to “give our best to earn three points.” 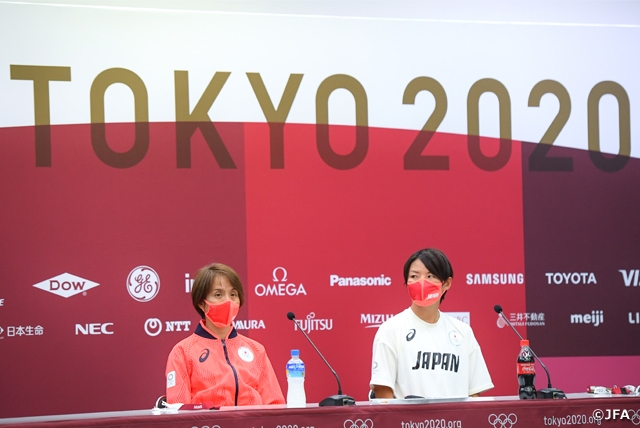 The Nadeshiko Japan’s first group stage match against the Canada Women’s National Team is scheduled to kick-off at 19:30 on Wednesday 21 July, at Sapporo Dome, Hokkaido.

TAKAKURA Asako, Coach of Nadeshiko Japan (Japan Women’s National Team)
We know that there are many opinions about the Tokyo Olympics, but we are very pleased to have the opening match with the Canada Women's National Team here at Sapporo Dome tomorrow. Many members of the press have gathered here today for this press conference, and it reminds me how warm it is to be surrounded by people. The first match will be an extremely important match for both teams, so we will do our best to earn three points. Canada is a proven team with great track records, so it will not be an easy match. However, our players have given their utmost efforts to prepare themselves and showcased a positive attitude throughout our activities. We may not be the big favourite to win the gold medal, but we will improve ourselves through each match, and give everything we’ve got to play all six matches to reach the podium.

MF #8 MIURA Narumi (Nippon TV Tokyo Verdy Beleza)
I am getting the sense that we are finally here, but it still feels surreal for me that I am going to be playing in the Olympics, so I am just going to prepare myself like it is just another match. We went through our set-plays in our training session, and the team was playing with a very positive vibe. Although I am a defensive midfielder, I am always anticipating for opportunities to score goals. Scoring in the Olympics is one of my goals, so I will be aggressive to take shots, while also creating opportunities for my teammates.

MF #12 ENDO Jun (Nippon TV Tokyo Verdy Beleza)
I watched the team play in the 2012 London Olympics and gained great courage from the players. Ever since, I have always dreamed of playing in the Olympics, and now that I am in position to provide courage, energy, and excitement to the viewers, I am feeling the responsibility weighing on my shoulders. Many things have happened since the 2011 earthquake, and I have to thank many people for allowing us to play football in such a wonderful environment. I hope to showcase a performance that can give energy to the people of Tohoku and all of our supporters. Either I start the match or used as a substitute, my job is not going to change. I am always anticipating for my opportunity to score goals, so I hope to showcase a performance that can excite the people who are watching.

MF #13 SHIOKOSHI Yuzuho (Mitsubishi Heavy Industries Urawa Reds Ladies)
We have been counting down the days until the Olympics and now that the number is down to “1,” I am getting very excited, despite the uncertainty that lies ahead of us. I was satisfied with my overall performance against Australia, but when looking back on each play, I feel like there were scenes where I could have played with more composure to showcase my strengths. In terms of defence, I need to be more active and take the initiative to apply pressure to our opponent. I am not sure how I will be used in a match, but I will do my best to understand the role I am given at each situation. As a starter, I will not hold back to save my energy, while as a substitute, I will do my best to change the dynamics of the match. 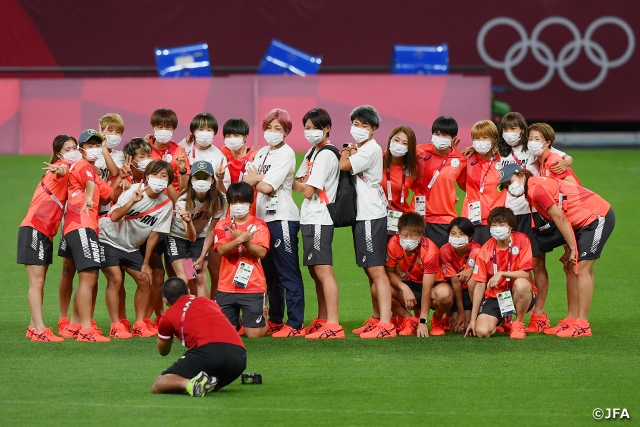