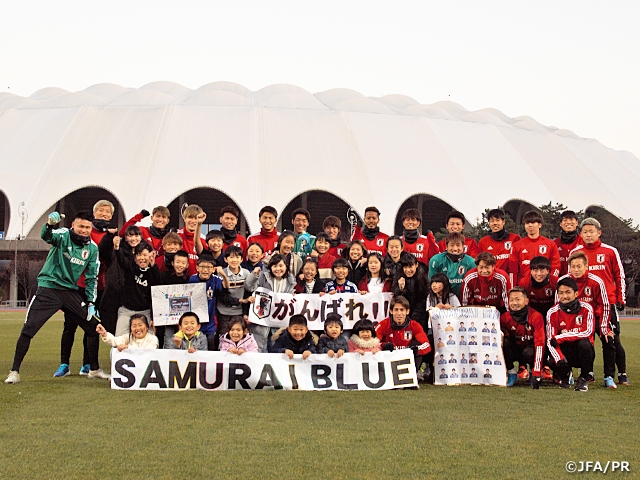 Ahead of the EAFF E-1 Football Championship 2019, the SAMURAI BLUE (Japan National Team) arrived in Busan, Korea Republic on Sunday 8 December. The team held a training session in the evening where players who has played in the J.League matches on the day before focused on recovery their bodies, while other players went through drills with assistant coach YOKOUCHI Akinobu.

At the training field, 23 students from the Busan Japanese School visited the training session to give a warm welcome to the players and to cheer on the team.

On this day, the J.League Awards 2019 took place in Tokyo, where NAKAGAWA Teruhito (Yokohama F・Marinos) was named as the league MVP. HASHIMOTO Kento (FC Tokyo) was named into the Best Eleven while TANAKA Ao (Kawasaki Frontale) was named as the Best Young Player, as their interviews were broadcasted from Busan. 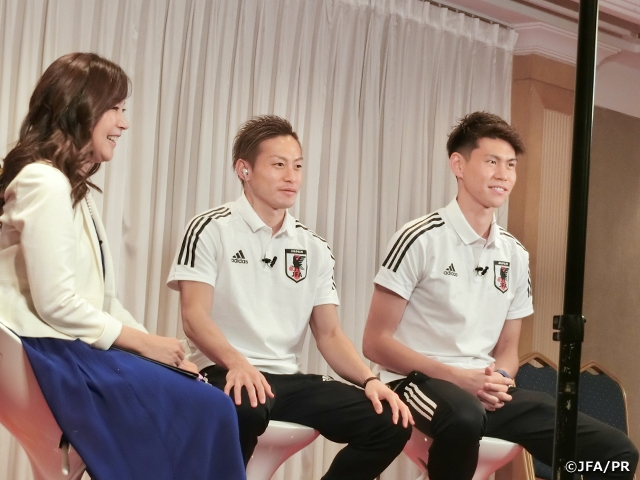 Tanaka, who left a strong impression with his goal scored against Brazil as a member of the U-22 Japan National Team, played in 24 league matches this season. The youngster commented in his interview, “I had my ups and downs, but the club continued to have faith in me, and I was able to gain precious advices from my teammates to become a better player. This was one of the most productive year I have ever spent, but I my goal is set much higher, so I will continue to make my efforts.”

Following the awards, Nakagawa, the 2019 J.League MVP, mentioned, “There will be plenty of pressure (at the E-1), but as the MVP, I must produce results. How we enter the first match is crucial.”

Despite entering the E-1 Football Championship with just a two-day interval following the final match day of the J.League, coach MORIYASU Hajime stressed that, “It cannot be used as an excuse.” The SAMURAI BLUE will play their first match against the China PR National Team on Tuesday 10 December (19:30) at Gudeok Stadium. 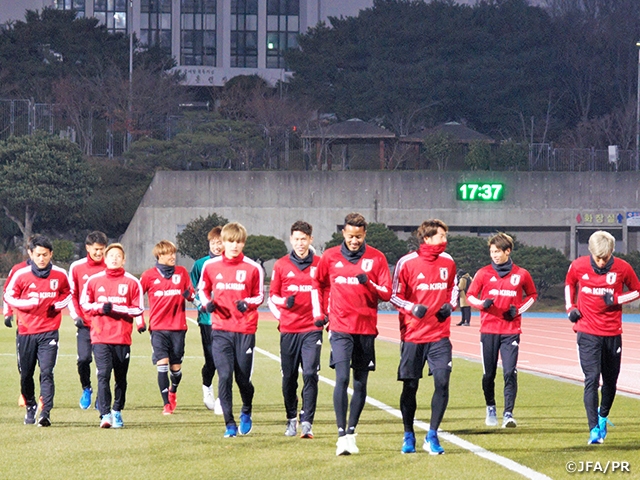 MF #9 SUZUKI Musashi (Hokkaido Consadole Sapporo)
I am the third oldest player on this roster, so I will do my best to showcase a positive performance that can lead the team. I have experienced it myself, but the pathway from the Olympics to the senior team is a precious experience for these players, and we hope we can inspire each other to become better players. As coach Moriyasu has mentioned before, the Japan National Team and the U-22 Japan National Team is a single team, and we are striving to strengthen the overall level of the national teams. It is important that we prepare ourselves within the short period of time to showcase our best performance on the pitch. Personally, I would like to make an impact at this tournament. We will be facing tough opponents, but winning the match is our top priority, so we will give our best efforts to achieve our goal.

FW #20 OGAWA Koki (Mito HollyHock)
Playing for the Japan National Team was my dream since I was little. With the team consisting players from variety of generations, it is important that we actively communicate with each other and enter the match with a strong intention to win as a team. Ahead of the Olympics, no one is guaranteed with their position. As a forward, it is very simple, the player with the most goals in the next six months will survive. I will do my best to help the team win the title by scoring goals.