Japan U-21s lose to Iraq in AFC U-22 quarterfinals 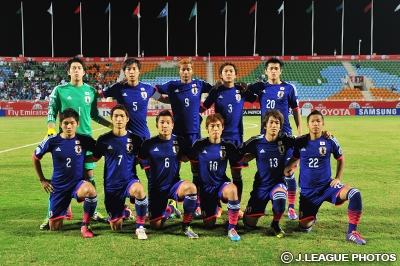 The Japan U-21 side lost 1-0 to Iraq in the quarterfinals of the AFC U-22 Championship in Muscat on Monday.
Teguramori Makoto’s side was put under pressure by the Iraqis from the outset of the game but played tenaciously and tried to attack on counters.
Suzuki Musashi made an attempt shortly before the break but his effort sailed high over the bar.
Japan made substitutions after the break and came close with attempts from forward Nakajima Shoya halfway through the half.
Iraq broke the deadlock six minutes from time when Amjed Kalaf beat two Japan defenders before guiding the ball into the net.
Teguramori brought on Sanfrecce Hiroshima forward Asano Takuma shortly after that, but his side failed to find the target.
“It’s a pity and also disappointing to have lost today,” said Teguramori. “We opted to focus on defense first to build our game today, and our players did well according to our plans.”
It was Teguramori’s first tournament after taking the helm of the Japan U-21 side earlier this month.
“It’s not easy to achieve a victory so soon after taking over,” the former Vegalta Sendai manager said. “However, our players can learn from this experience and it can help our preparations for the Rio de Janeiro Olympics.”
In the other quarterfinal match on Monday, Australia fell 2-1 to Saudi Arabia.
In Thursday’s semifinals, Korea Republic will play Iraq, while Jordan will meet Saudi Arabia.