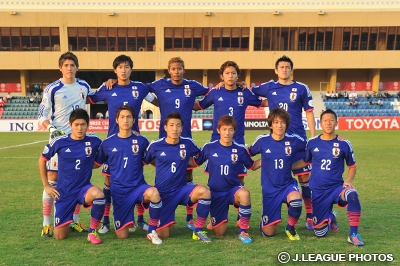 The Japan U-21 team moved into the quarterfinals of the AFC U-22 Championship after beating Australia 4-0 in their third and final group match on Thursday in Muscat.
After drawing their first two matches, Japan needed a win to qualify for the quarterfinals. Coach Teguramori Makoto changed his side’s formation and that helped the young Japanese players attack more down the flanks.
Nakajima Shoya of Tokyo Verdy struck the opener in the 18th minute before Yajima Shinya of Urawa Reds made it 2-0 six minutes later.
Japan’s third goal came when Australia’s Corey Brown attempted to clear Yamanaka Ryosuke’s cross only to see the ball end up in the Australians’ net.
Leading 3-0 at halftime, Nakajima struck a penalty three minutes into the second half and Japan never looked back.
Japan finished second in Group C on five points, one point behind Australia.
“Our players have good intensity and focus,” said Teguramori. “We could play according to our plans, and our team has grown in every game in the tournament.”
Iran beat Kuwait 3-1 in the other Group C game to finish third with four points, ahead of Kuwait (one point).
In Monday’s quarterfinals, Japan will play Iraq, who topped their group with three straight wins.
Teguramori said, “Our opponents are preparing for the Rio de Janeiro Olympics like us, and if we can beat a team like them it will make us tougher as a team.”
In the other quarterfinals, Australia will play Saudi Arabia on Monday, while Syria will play Korea Republic and Jordan will play the United Arab Emirates on Sunday.