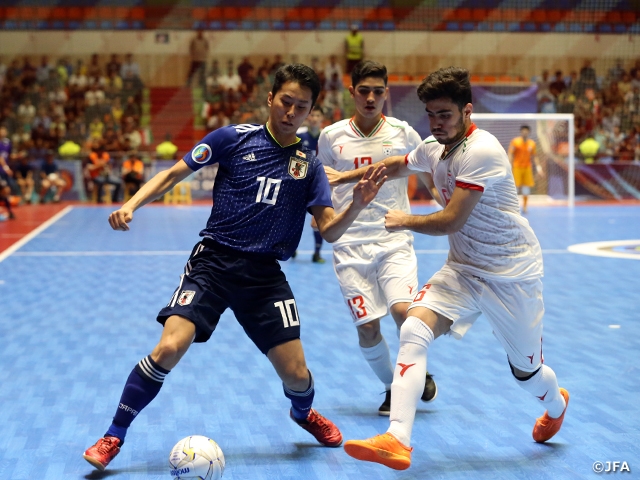 The match saw Japan creating opportunities from the early minutes, as HASHIMOTO Reira scored the opening goal in the fourth minute from a corner kick. Following this goal, Iran notched in back-to-back goals to take the lead, but OTSUKA Hiroto delivered the equaliser in the 18th minute with the assist coming from YAMADA Kaito, as the match entered halftime 2-2.

Just like the first half, it was Japan who scored the first goal, as OSAWA Masashi converted an opportunity in the 24th minute to take the lead, but once again, Iran retook the lead with consecutive goals scored by MAHDI DEHGHANNEAHAD, to make it 3-4. In efforts to level the match, Japan applied aggressive pressure in the closing minutes. With just seconds left on the clock, Osawa was brought down in the goal area to earn a penalty kick. It was MOTOISHI Takehiro who stepped up to convert the spot-kick, making it 4-4 and sending the match into overtime. 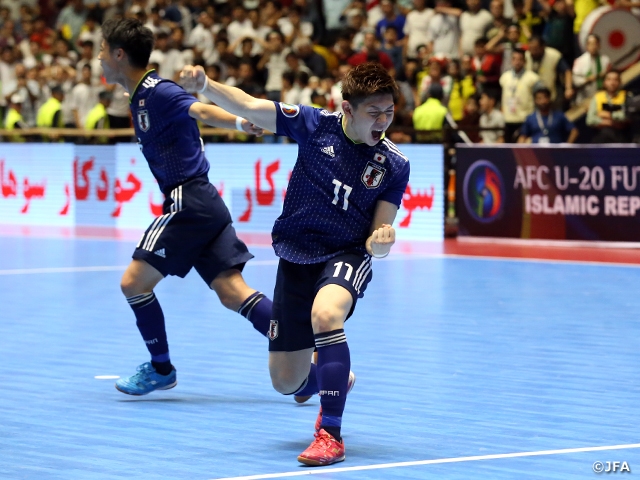 Japan took the initiative in overtime, as IGUCHI Rintaro scored the first goal in the 43rd minute. Three minutes later, YAMADA Jiei followed by scoring a mid-range shot to give Japan a two-goal lead. With Iran initiating their powerplay in the second period of overtime, Japan took advantage of the situation as HATAKEYAMA Yuki and KIMURA Yuta each notched in a goal to give Japan an 8-4 victory. 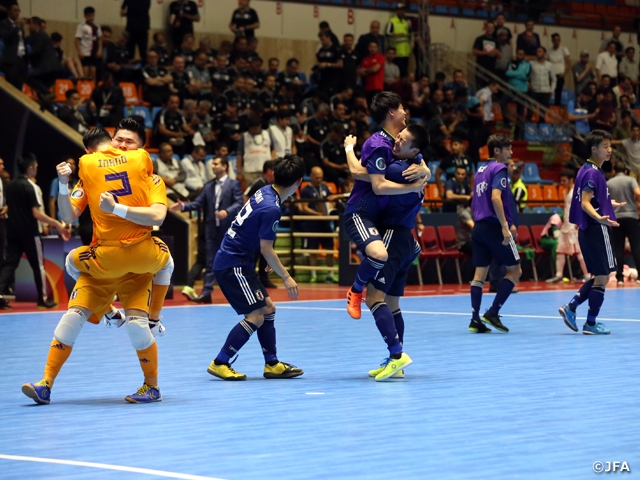 As the match came to an end, the Japanese players were greeted by a “Japan” chant from the Iranian supporters, earning the respect of the local fans. The team will seek to earn their first ever AFC U-20 Futsal Championship title, when they face the U-20 Afghanistan Futsal National Team at the final on Saturday 22 June.

SUZUKI Ryuji, Coach
We were able to win against the defending champions and the host nation, Iran National Team, with a score of 8-4. We have now put ourselves in position to challenge for the Asian title. Despite being in a complete away situation, the players stuck together and fought with great commitment in this match. The players have shown great improvements through this tournament, and I am very proud of them. We will prepare ourselves well to showcase a good performance at the final, so please continue to root for us.

FP #3 IGUCHI Rintaro (Shriker Osaka Satellite U-18)
Regardless of either I was on the court or on the bench, my heart was pounding all the time. It was a great match and I was getting the chills throughout the match. Despite all the excitement I was feeling, I was able to keep myself so calm when I scored the goal, and it really surprised me when the ball went in. Everyone fought hard and we played very well as a team. This match really made me realise the strong bond of this team. We were able to win the match because no one gave up. The next match will be our final match with this team. We hope to finish this tournament in a high note.

FP #6 OSAWA Masashi (Zott Waseda Futsal Club)
We lost to Iran during our Chinese Taipei tour, so that definitely in my mind when we entered the match. However, we were able to showcase that our team has improved since the previous tournament. The team showed that we trust in each other and the team concept. It was such a fun match. The crowds were showing great enthusiasm and they were so loud, we couldn’t hear our own voices, which was something I have never experienced before. I was so excited throughout the match, and I was thrilled to hear the “Japan” chant from the crowd after the match came to an end. We hope to showcase a good performance at the final to take home the title.

FP #13 OTSUKA Hiroto (Hosei University)
My goal came when the team was trailing and I saw (Yamada) Kaito dribbling down the line, so I made the run towards the far post, believing that he would deliver the final cross in that area. We were committed to score a goal when we initiated our powerplay, so I kept thinking what I needed to do in that situation to help the team score a goal. This was our second time facing Iran, but they were so fast and so good. We managed to add on a few more goals during their powerplay, but in many occasions, they made us feel like we were going to lose the match. But we managed to stick together and fight as a team to earn this victory.