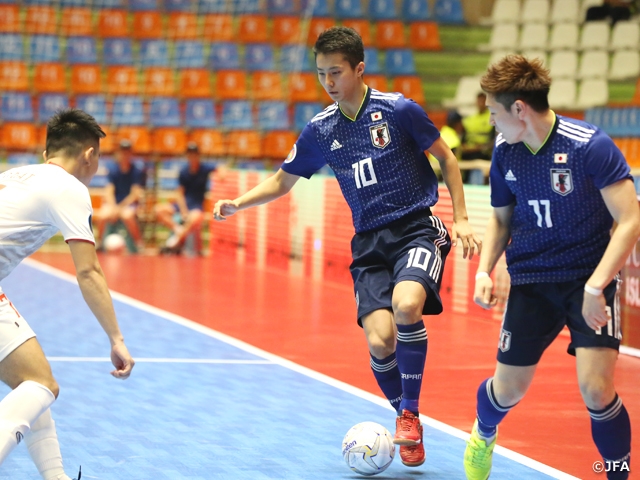 On Sunday 16 June, the U-20 Japan Futsal National Team faced the U-20 Vietnam Futsal National Team in the group stage of the AFC U-20 Futsal Championship Iran 2019. Despite conceding the opening goal, Japan came from behind to win the match 2-1, recording their second consecutive victory at the competition.

Japan and Vietnam had already clinched their spot into the final round after both sides won their match against the U-20 Tajikistan Futsal National Team. In this match, Japan made one change to their starting line-up against Tajikistan, as TABUCHI Hiroshi started in goal, with HATAKEYAMA Yuki, TAKAHASHI Yudai, MOTOISHI Takehiro, and YAMADA Jiei on the field. 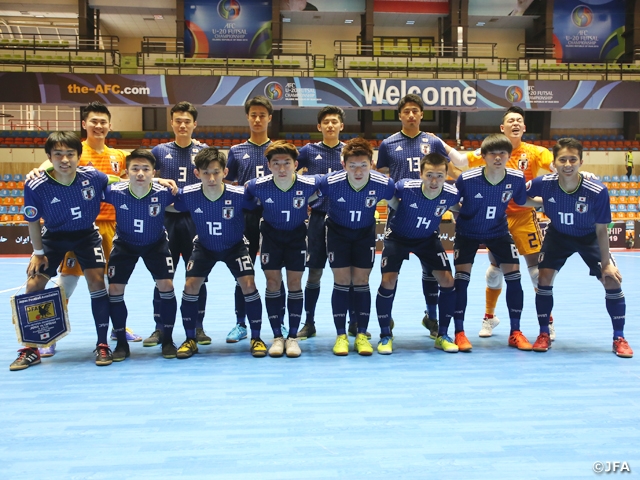 With two equally matched teams colliding, each team created opportunities in the early minutes. While Japan started to take control of the match following the 10th minute mark, it was Vietnam who scored the opening goal, when they captured the net in the 14th minute with a well struck shot from distance.

Despite conceding the opener, Japan responded right back with YAMADA Kaito’s left footed shot that levelled the match within 30 seconds following the first goal. With momentum on their side, Japan continued to threaten the Vietnamese goal. In the 18th minute, Motoishi fired a powerful shot to give his side the go-ahead goal, as the match entered halftime with Japan leading 2-1.

The second half saw Vietnam making countless efforts to equalise the match, but Japan showed great persistency to keep their lead. Tabuchi made an excellent save in the 24th minute to deny a close shot taken by Vietnam. Japan managed to hold onto their first half lead to win the match with a final score of 2-1. 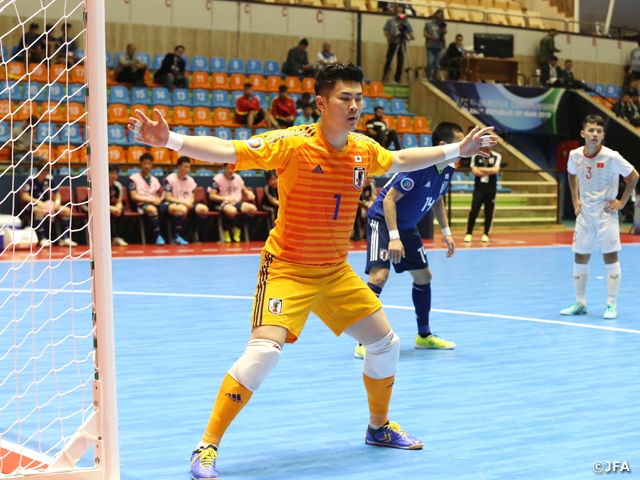 As a result, Japan finished as the leader of Group C, and following the previous tournament, they will once again face the U-20 Iraq Futsal National Team at the quarterfinals. They will seek for redemption after losing to Iraq in their previous encounter and try to make their first semi-final appearance at the AFC U-20 Futsal Championship, as the match will take place on Tuesday 18.

SUZUKI Ryuji, Coach
With the 2-1 victory against Vietnam, we were able to advance to the final round as the group leaders. I am proud of my players for scoring back the goal soon after we conceded the opener, and for fighting tenaciously during the tough stretch. We will once again face the Iraq National Team at the quarterfinals, who we lost at the same round in our previous tournament. We will prepare ourselves in the best way possible, so please continue to root for us.

FP #10 YAMADA Kaito (Agleymina Hamamatsu)
It was great that we were able to equalise the match soon after we conceded the opening goal. We managed to keep our composure after the first goal and kept communicating with each other, which led to that goal. Regardless of who we face, we will continue to play our style of futsal. Ahead of our next match, we will prepare ourselves well so that we can go beyond our previous result.

FP #12 KIMURA Yuta (Espolada Hokkaido)
That equaliser we scored after conceding the first goal meant a lot for us. While making my runs on the court, I was constantly thinking of ways to help out the team. Our next opponent, Iraq is a strong team with a similar style with our first opponent, Tajikistan. If we can keep on showing the performance we have been showing, we should be able to win the match, so we will continue to work hard as a team.

FP #14 YAMADA Jiei (Transfer procedure in progress)
We made a change to our set, but with Take (MOTOISHI Takehiro) playing as the pivot, it makes it easier for me to pass the ball to him, because he is a righty and I am a lefty. I feel like I was able to initiate many attacks by sending the ball to Take. I still need to be more critical with my final touches, but I was able to build on my game intuition. In our next match, we will face Iraq, who we lost to in our previous tournament, so we hope to showcase a good performance by working hard and earn the victory this time.