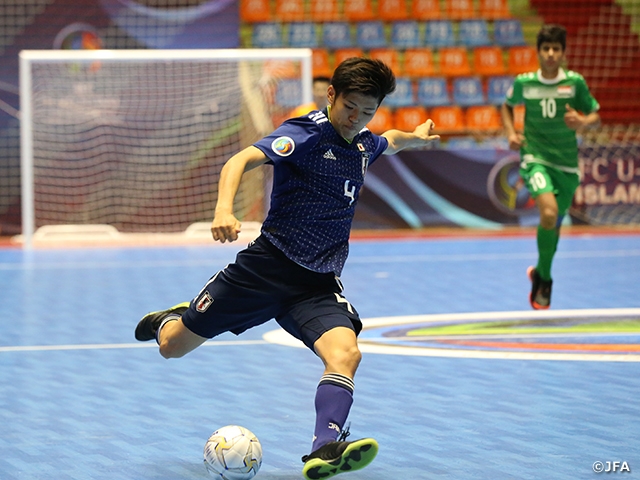 Following their match against the U-20 Vietnam Futsal National Team, Japan started TABUCHI Hiroshi in goal, with HATAKEYAMA Yuki, TAKAHASHI Yudai, MOTOISHI Takehiro, and YAMADA Jiei as the field players. The team applied aggressive pressure from the early minutes to take the initiative of the match. 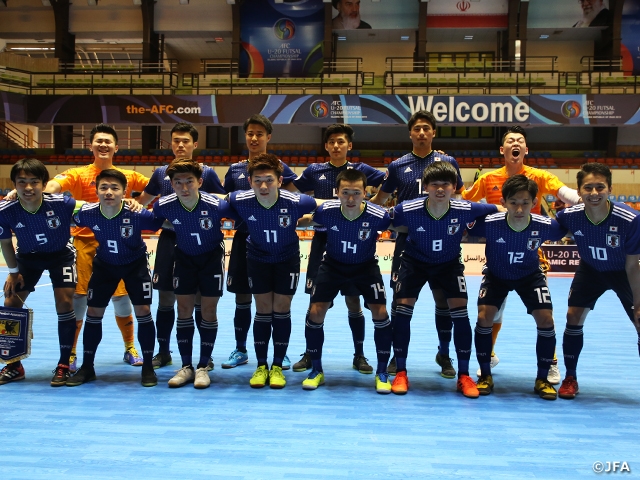 In the fifth minute, Japan denied an opportunity created by the opponents before initiating a counterattack. The fast break allowed HAGIWARA Manatsu to strike a powerful shot with his right foot that captured the opening goal. Japan continued to control the game to enter halftime with the one goal lead.

Japan continued to show persistent efforts in defence to keep away Iraq from creating a major opportunity. However, they also struggled to score a goal, as their shots weren’t hitting the target. With the match entering into a deadlock, Iraq initiated their powerplay with seven and a half minutes left on the clock. Japan kept their composure to defend against the powerplay and captured their second goal off a counter from Tabuchi’s throw in the 38th minute, as MATSUKAWA Kota calmly slotted the ball into the net.

Iraq made their final efforts to score a goal, but Japan managed to hold onto their lead to win the match 2-0. Japan will now appear in their first ever semi-finals at the AFC U-20 Futsal Championship, where they will face the defending champion and the host nation, Iran, on Thursday 20.

SUZUKI Ryuji, Coach
We managed to win against Iraq to earn our ticket to the semi-finals. It was a tough match until the very end, but I am proud of my players for fighting through the entire match. We will now face the host nation, Iran, at the semi-finals and we are looking forward to facing them in a packed stadium with the local fans. We will analyse the opponents and give our best efforts to prepare ahead of the match. We thank all the fans cheering from Japan and we hope to showcase a positive performance for our fans.

FP #7 TAKAHASHI Yudai (Pescadola Machida Aspirante)
We entered today’s match with the intention to apply pressure as we usually do and find our rhythm. The fact that we managed to close down the gap when our opponents had the ball helped us gain control of the match. We were able to score a goal against the opponent’s powerplay, and I feel like our strong points were on display in today’s match. With Japan losing to Iraq in the previous AFC U-20 Futsal Championship, we were able to get revenge for our country. We will do our best to stop Iran’s offence and work hard to earn a victory in our next match.

FP #9 MATSUKAWA Kota (Shriker Osaka Satellite)
Although there were some close scenes, we managed to keep a clean sheet today. When I scored the goal, I knew our opponents weren’t aware of the open space behind them, so I made a run at the space and lobbed the ball into the net. This will be my first-time facing Iran. I know that they are a strong opponent, but if we can showcase our usual performance, I believe we can win the match, so we will prepare ourselves well ahead of the match.

FP #11 MOTOISHI Takehiro (Pescadola Machida Aspirante)
I entered the match with the intention to apply aggressive pressure and construct our rhythm by showing good defence. Our approach to keep the pressure high proved to be effective and we were able to initiate some good counterattacks. Knowing that Japan has lost to Iraq at the same tournament two years ago, we had to pay them back. We told each other to give 120% in this match, and I think that enthusiasm led to this victory. We have lost to Iran during our Chinese Taipei tour and we must win against them in order to win the tournament title, so we hope to get our revenge in our next match. 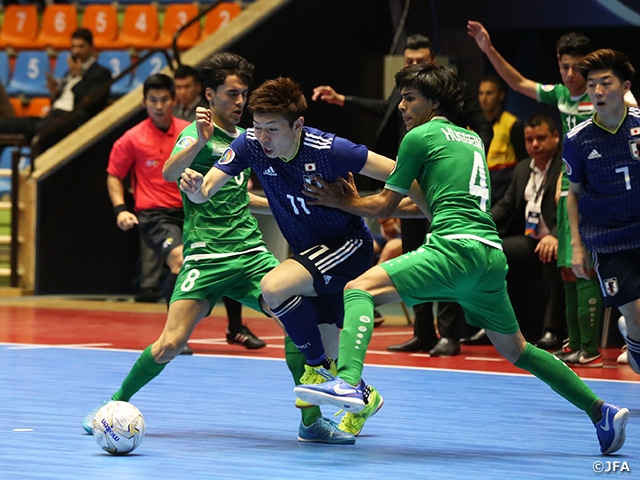