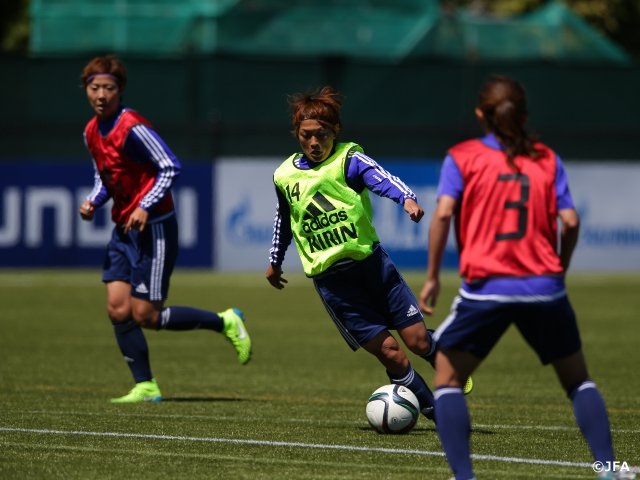 Nadeshiko Japan won the opening match of the 2015 FIFA Women's World Cup in Canada against Switzerland 1-0. The following day, Tuesday 9 June, the 11 players who either stayed on the bench or played only for a short time during the game, held a morning training session in Vancouver.

The out-field players and the goalkeepers held separate sessions. The out-field players started with some core training and practice steps to warm up. This was followed by some passing training that focused on details such as the timing of follow-up support, the strength of passes, and control of the ball. The goalkeepers, on the other hand, focused on basic movements, such as catching the ball after moving side-ways or saving in the goal area.

Then the players had a practice match together, using a half-length pitch. The coaches instructed the players: 'the passes are too weak', and 'take up a position after checking the ball'. In the end, they were divided into two groups to practice shots from outside the penalty area, attacking with a numerical advantage, and playing a four-on-four mini game. The players finished an approximately one-hour practice session with some fun, after focusing so seriously.
The players who started the Switzerland match or were on the pitch for a long time the day before, stayed at the hotel to recover.

ANDO Kozue, who had to retire from the game due to an injury she picked up during the match against Switzerland, was diagnosed with an ankle fracture in her left leg. She has to leave the team soon to focus on her recovery. 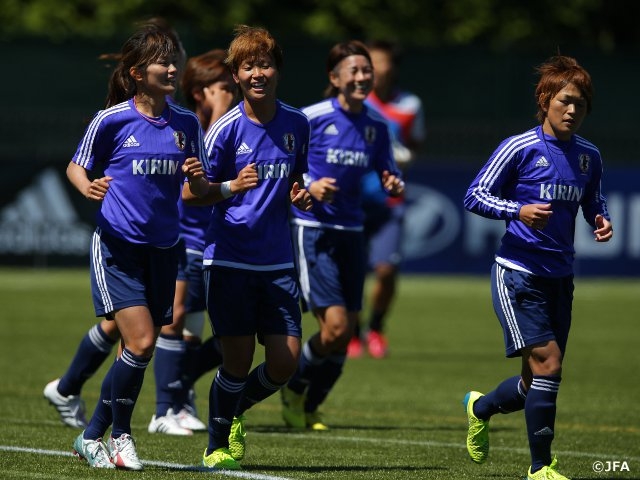 MF #9 KAWASUMI Nahomi (INAC Kobe)
I expected a tough match against Switzerland, as we struggled in the opening game of the previous World Cup as well. Then, Miyama scored from a free kick in the end to decide the match. I'm pleased that we earned three points. Personally, I believe there will be some opportunities for me, so all I need now is to prepare for that moment. One of the advantages of this team is any player on the pitch can add some essence to the Nadeshiko playing style. I'd like to get myself ready to contribute to the team.

DF #5 SAMESHIMA Aya (INAC Kobe)
When I come off the bench, I think I'm required to impact the game and attack swiftly, using the length of the pitch. In the first half of yesterday's game against Switzerland, the opponent waited until the second half to come forward to score. So we couldn't go forward either, and struggled a bit. It was difficult to decide whether to pass the ball around rather than going forward to attack in the opening match with a one-goal lead. Winning the opening game to earn three points means a lot. I'm sorry for Ando, but I know she is suffering most. All we can do is play hard for her.

DF #23 KITAHARA Kana (Albirex Niigata Ladies)
I had mixed of feelings toward the match against Switzerland - I had finally come to the place of my dreams, but I was frustrated that I couldn't be on the pitch. I was also really pleased that we won as a united team. Under pressure, the defenders used their bodies to defend without giving up, which gave us a clean sheet. When I'm on the pitch in the championship, I'd like to use my advantage - height - for headers. Most international players have physical advantages with speed. In the World Cup, their spirits are really high as well. I hope to do my best, whatever I can. There was a good atmosphere around in the team before the game against Switzerland, and we're getting ready for the next game.

DF #20 KAWAMURA Yuri (Vegalta Sendai Ladies)
I was very nervous in the game against Switzerland, as it was my very first match in the World Cup. However, I understand I should have shown more of my game under that pressure, and I should have enjoyed myself more, because only limited number of players could be on that pitch. As the distance between the players was a little too large, I'd like to correct that to pass the ball with better timing. Also I made some careless mistakes. I got to know the atmosphere of a match, and I'd like to get myself ready in practice sessions for the next game.
Ando is the kind of player, who leads by example. I am truly sorry for her, but I think we have to play even better to win the championship for her.