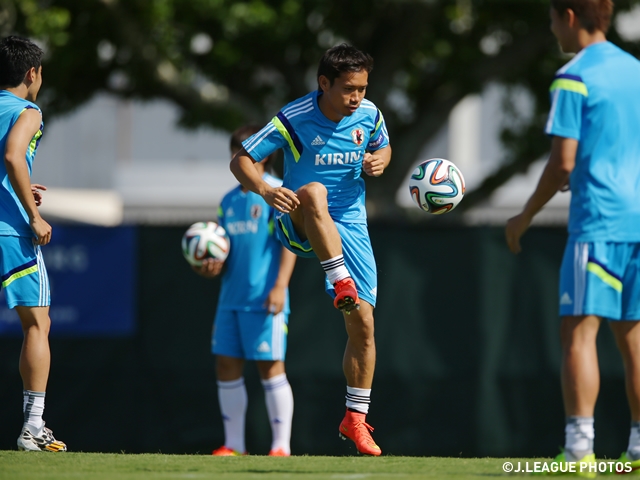 On the day six of the training camp just before the FIFA World Cup 2014, the Japan National Team had a two-hour training session in Clearwater, a town near Tampa, in the strong summer sunlight. At the beginning of the session, which was open to the media, the three goalkeepers had a goalkeeping practice while field-players checked their passing and shooting accuracy and improved physical condition.

After then, the squad reviewed their offensive and defensive tactics. Meanwhile, OKAZAKI Shinji stayed in a hotel due to his low form. With the camp in Florida having entered its last phase, Japan had a 3-1 victory against Costa Rica in the first match of the two friendly matches in Tampa on 2 June. "Showing good performance in warm-up games is desirable, but we have a number of issues. Taking advantage of our strength, we would like to raise our motivation,” said ENDO Yasuhito, who will play his third World Cup in Brazil.

The team will play the friendly match against Zambia on Friday, 6 June at Raymond James Stadium in Tampa and depart for Brazil on Saturday, 7 June. 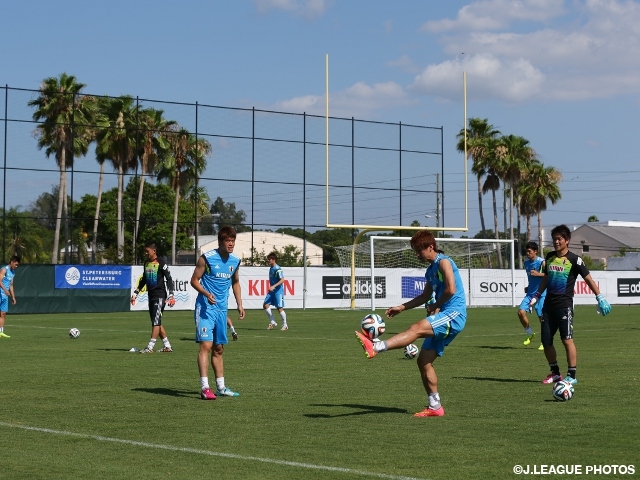 MF AOYAMA Toshihiro （Sanfrecce Hiroshima）
In the match against Costa Rica National Team, We all had a certain level of understanding of each other, and we could play like that. I could also keep playing my style which is always attacking the opponents’ goal. Being able to play like that is a sign of our improvement, but we have to make judgments much quicker without thinking too much. Our judgments need to be more accurate, too. It has gotten better to some extent, but it can still get even better and it has to be shown on our stat sheets and results.

MF YAMAGUCHI Hotaru （Cerezo Osaka）
We played not bad against Costa Rica National Team, but we didn’t play great either. Early in the match, we kept being attacked by them for some time. It would have been better if we hadn’t allowed a goal, but we actually did. In real World Cup matches, it will be even tougher to come back from behind, so that’s something we have to improve. (Speaking of the counterattack followed by the goal allowed) It would have been no problem if a centre back had shifted and checked that. It’s one of the small details in a match, but it will be better if we all can get on the same page in those details.

MF ENDO Yasuhito（Gamba Osaka）
We have been doing really well including practices. We won against Costa Rica National Team, but we haven’t got anything out of that match. A match like that is just a warm-up for the World Cup. We always have to stay focused at a high level and stay motivated at a high level both in matches and practices. The first thing we want is to get something out of the next match. Then after arriving in Brazil, we will feel more like “it’s getting started now.” In practices we have to maintain a good mood and good sense of urgency, and I think that’s when the players who have experienced the World Cup before can lead the rest of the team.

DF YOSHIDA Maya（Southampton FC, England）
(Speaking of the goal allowed against Costa Rica National Team) We should have reacted much quicker when we allowed that goal. All teams we will play against from now on are ones that never miss one chance like that. So we will have to have a quicker transition from offense to defence, and minimize mistakes in our half. It would serve best for us if our two centre backs can cover a bigger space. We will have to keep trying to acknowledge with each other on small details. In the World Cup, there will be so many situations that now we don’t expect to happen. In situations like that, it will be important for the goalkeeper and defenders to stay calm and control the match from behind. I will particularly try to do it.

DF UCHIDA Atsuto （Schalke 04, Germany）
(Speaking of his leg) After playing seventy minutes, I don’t have any setback. When I get on a pitch, get hit or kicked by opponents, and start having wounds and feeling pain, I feel like “I am now back playing”. It makes me feel like I am actually back in the game and I am happy. I can feel that it’s getting better as I play. It’s important to get used to winning before going into the tournament. Some of it will go away and we get back to a start line, but the mental preparation before matches, momentum and confidence, those things will be carried over and won’t go away.

DF  INOHA Masahiko (Jubilo Iwata)
Now is the time for every one of us to think about where he is supposed to be, and every one of us has to show what he can do best. In practices and off the pitch, we are expected to do what’s best for the team and put priority on the harmony of the team. No matter what condition I am in, I am getting ready to give my best performance. I think I am in the toughest situation physically and mentally, so I can’t afford to stop doing it. I think the most important thing for me to do is to stay on a good balance mentally and physically even during training.