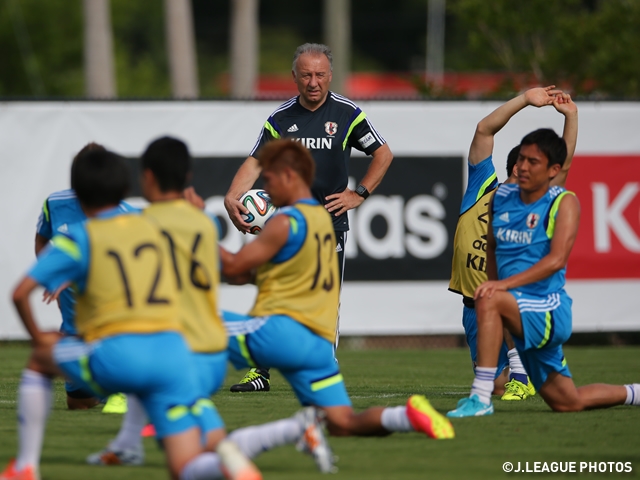 The Japan National Team held their practice sessions in Clearwater near Tampa in Florida in the afternoon on Saturday 31 May. It was the second day of the final training camp before the 2014 FIFA World Cup.
In the searing heat with temperatures over 30 degrees, just like the day before, the players, except the goalkeepers, started to warm up by passing balls hand-to-hand. They took their time and practiced their attacking tactics, finishing their two-hour training session with a practice game on a small restricted playing area, in which they could touch the ball only for a limited number of times. Sakai Gotoku, the defender, who injured his leg in the training camp last week in Japan, had a separate session, as he did the day before.

The team will meet Costa Rica on Monday 2 June. Hara Hiromi, National Technical Director, who is also the General Secretary of Japan Football Association, noted: ‘Latin American teams are good at counter-attacks. Costa Rica have physical strength and tend to steal possession using short passes, if we’re too slow. So we need to prepare for a quick counter-attack. I think it’s a good team to play against.’ 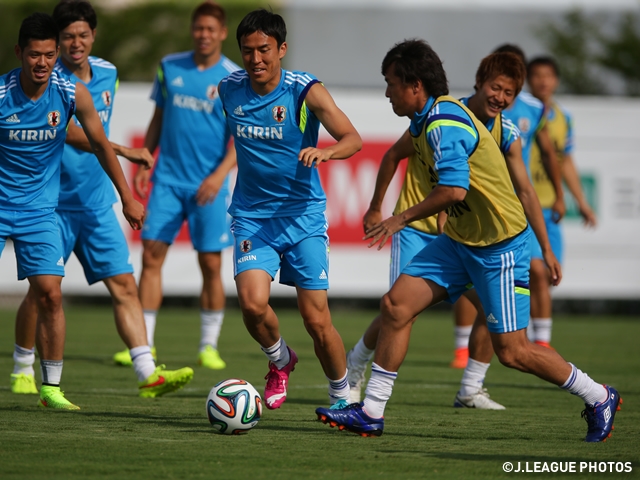 FW HONDA Keisuke（AC Milan/Italy）
I’ve been exchanging views with the coach until we reached a solid understanding. There’s no escaping the pressure of the World Cup, but I sort of look forward to finding out how much stronger I can be. I feel the most relaxed I have been in these four years. When each player knows exactly what to do in the game, I think we can play harmoniously. This FIFA World Cup is very important for Japanese football, as we are standing at the cusp of bigger achievements. I’ve always thought it’d be a milestone for me. I remind myself that I should play each time as if it might be ‘the last chance’.

MF YAMAGUCHI Hotaru（Cerezo Osaka）
In this training camp, we focus on sharing our understanding of what we’ve achieved together. We’ve been communicating with each other in practice sessions about even very small things, such as ‘playing style preferences’, which I think we should continue. Personally, I think mental condition is very important. I’ve always known what I should do in the match and nothing has changed since I was selected as a member of this team. I will tray harder to contribute to support our attacks, which I believe makes a difference in the game.

FW OKAZAKI Shinji（1.FSV Mainz 05/Germany）
I feel there is a very good atmosphere in our team. Every single player knows that final preparation for the championship is vital, so we won’t go on to regret anything. We have been following the coach’s advice from the beginning to the end for four years. However, in the game we have to decide how to play in detail, such as when and how to put pressure on the opponent. When times are tough, what we should do to win the game is also up to us. We need to decide this through good communication among the players, which is a bit different from how things were before. I learned that the coherence of the team might decide the match from the previous World Cup. As we had good results thanks to a united team last time, I expect that we can go further with our four-year effort and the power of a united team. Japan can play very harmoniously together when it counts, so I hope we will play well through the tournament.

FW OSAKO Yuya（TSV1860 München/Germany）
On the first day of the training camp, we put in massive effort, moving a lot in order to sweat. It was a very successful session. I can sleep very well, so the time difference is not a problem for me. As we’ve been practicing together for a long time, practice sessions have become more profitable. The time here is very fulfilling. We’ve got our own strengths, so it comes down to how we use it in the match. The coach sticks to the formation using only one forward, like it’s a rule. It’s very important and also interesting to try and see what I can do within those limitations. It’s vital to play as a united team, showing each player’s own strength. I very much look forward to playing in the FIFA World Cup. Just can’t wait.