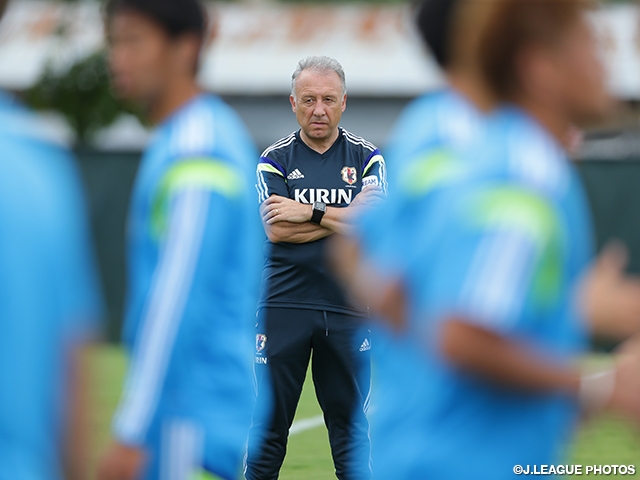 As the Japan squad faces Costa Rica in a tune-up game for the 2014 FIFA World Cup on the following day, their coach Alberto Zaccheroni spoke at a news conference that he would ask his players to elaborate their judgements.
At their training camp in Clearwater, near Tampa, in Florida, the United States, which started on the 30 of last month, the team have worked on their conditioning and tactics while they have also tried to cop with the heat and humidity by practicing in the temperature of over 30 degrees.
''It's not easy to play football, keeping our intensity, in the hot and humid weather, but we will have to play in weather like this. It's important to adjust ourselves to the hot and humid weather. We would like to play, observing our players' conditions and minutes played,'' Zaccheroni said.

Costa Rica ranks 34th in the FIFA ranking (Japan, 47th). They clinched a World Cup berth for their third time ever, as they finished as the runner-ups in the North Central America and Caribbean qualifier. They are in Group D in the World Cup along with Italy, England and Uruguay.
''Costa Rica earned more points than Mexico in the World Cup qualifying. They have many players who play in Europe and are a very good team,'' Zaccheroni said. But the Italian coach continued, ''we would like to focus on ourselves,'' indicating that his team has no room to care about anything but tuning up for his own team as they will have their first World Cup match two weeks later.
On the day, the Japan squad held an hour-long practice session in Clearwater under a cloudy sky.
''My condition isn't bad, and I think it will get a lot better,'' forward Kagawa Shinji said afterwards. ''We want to improve on our distances and supports between us better than the Cyprus game, and I want to play for the entire 90 minutes if I'm given the chance.'' 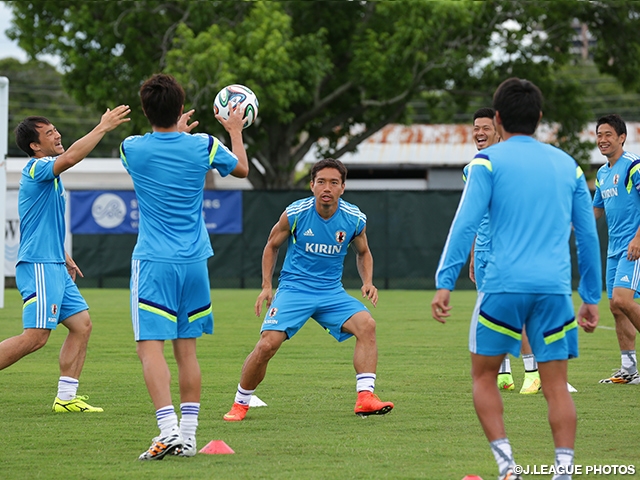 Meanwhile, during the morning, Clearwater mayor Greg N. Cretekos visited the team hotel. He gave the team welcoming words of encouragement as: ''We are exited to have the Samurai Blue Japan team who are heading to the World Cup. We wish the best luck for you all in the World Cup.''
''This is a great location and the ocean reminds me of my hometown in Italy. Hopefully, I will get back here one the World Cup is over,'' said Zaccheroni, who was given a memorial plaque with which a key was embedded by the mayor. Zaccheroni presented Cretekos a jersey with which the autographs of all the members are signed.

Alberto ZACCHERONI, Head Coach
We are shooting for the actual tournament, and we would like to watch our players' conditions and minutes played in tomorrow's match. I feel that our preparations have come very well. It's not easy to play football, keeping our intensity, in the hot and humid weather, but we will have to play in conditions like this, so we will need to adjust to the weather. I would like to ask our players for sharp judgements. For the players that did not play much during the season, we would like to give them as more minutes as we can.

ENDO Yasuhito（Gamba Osaka）
Tomorrow's game will be our last opportunity to play against a team who are in the World Cup, so we would like to aggressively try our offense and defense. As much as we will need to show what we have done, we will need to run our opponents considering the weather here, and also it will be important to use our variations. So we want to try them some occasions during the game. Our trait is to play relaying the ball, but the number one priority is to score some goals. We will need to relay the ball to go for goals and need to relay the ball to exhaust our opponents, so we want to be on the same page as the team.

YOSHIDA Maya（Southampton FC/England）
It will be how much we can get rid of the opponents' attacking chances early on tomorrow. They have some fast, better players in the middle, so we want to be careful there. And it's nothing new anymore, but they are a team in the World Cup, so we have to be extra careful about our defense when our team is attacking. (My conditioning) has come very well so far. While tomorrow's game begins late in a hot weather, we want to get used to it and want to play for more than 45 minutes. Defensively, we want to hold them to none. We want to keep our guards up and play solid game.

HASEBE Makoto（1. FC Nurnberg/Germany）
Costa Rica is well organized as a team. Their speedy counter attack is similar to Greece’s style of play. Today, we held a player’s meeting and encouraged each other, saying, “We have a good atmosphere. Let’s work hard.” I don’t know whom the head coach will pick up, I have no problem with my condition.

OKAZAKI Shinji（1. FSV Mainz/Germany）
The game will be difficult. They have quality front players, and defend well but not systematically with many players in their defensive counter-attacking style. If we score against such a defensive team, that will increase our confidence. I think the opponent is highly motivated, so facing them in this important period is a big opportunity. I’d like to play in my style.

Jorge Luis Pinto（Costa Rica national team head coach）
Tomorrow’s game would be a tough one, but we are prepared to play as hard as we can.
I watched Japan’s World Cup qualifier games against Australia and Iran, and found they are speedy, dynamic and formidable. I know they have technically gifted players such as Honda and Kagawa. We have to do without Alvaro. It is difficult to find his replacement, but even without him our style won’t change basically. We have made good preparation to be prepared tactically and to be fit physically and mentally. Results of the remaining two games, including tomorrow’s match, would indicate where we are.