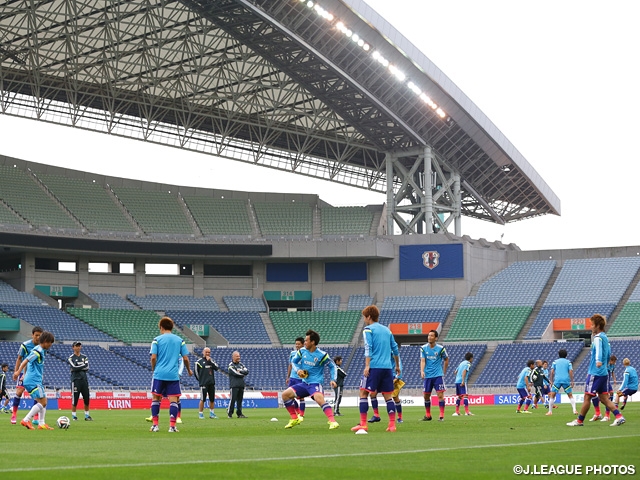 The Japan national team, who are in their preparation periods for next month's 2014 FIFA World Cup, had an official practice session on 26 May as they were set to play against Cyprus in the Kirin Challenge Cup at Saitama Stadium 2002.
''We would like to gain some information to find out what our issues and needs to be corrected for the World Cup through this game,'' said Japan coach Alberto Zaccheroni after the practice. ''The players are probably not going to be as sharp as they usually are, but I would like to ask them for their judgements and sharpness on their brains.''
In their training camp in Ibusuki, Kagoshima Prefecture, which continued until the 25th, the team held two practice sessions in the morning and afternoon every day, working on strengthening their physicality while they also checked on their ways of plays and team concepts. 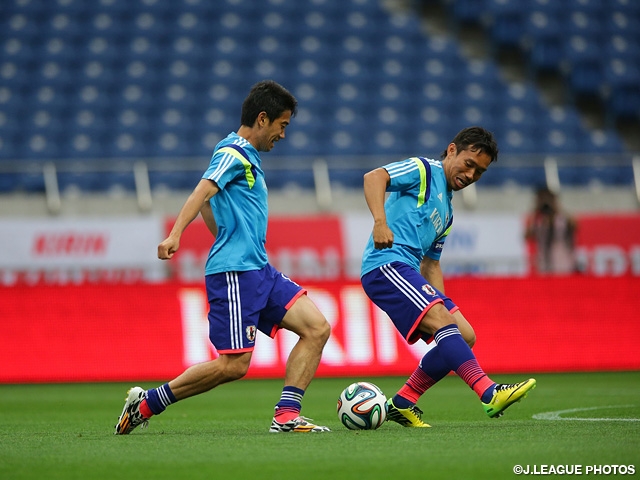 For the Cyprus match, how much Japan can put up their own way of play while they have some fatigue, seeing their conditions and combinations between the players will be the points in check for team.
At the practice at the stadium on the day, defender Sakai Gotoku, who had injured his knee and worked on separate menus at the hotel during the Ibusuki camp, showed up on the field. He was seen to tune up by walking while his teammates made passes with each other in relaxed manner at the beginning of the practice, which was open to the media.
It will be the first time for Japan to take on Cyprus. In the latest FIFA ranking, Japan is 47th and Cyprus is 130th. The European side were grouped along with Switzerland, who are headed to Brazil, and were eliminated as they finished last among the six teams in the World Cup qualifier. After the qualifier, they switched their coach to Charalampos Christodoulou and have started working on developments on their younger players.

''Although Cyprus did not have many points in the World Cup qualifying, they did not get big losses and would not let their opponents win easily. We would like to grasp the strengths and weaknesses of the opponents and play our own football,'' Zaccheroni said.
The Italian coach also mentioned Nadeshiko Japan, who earned a championship in the Asia Cup. ''I would like to say congratulations to Nadeshiko Japan and their coach Sasaki. They gave our men's team some boost. It's great to know that Japanese football is progressing. We would like to continue to put up better results and show the developments of the Japanese national team,'' he said. 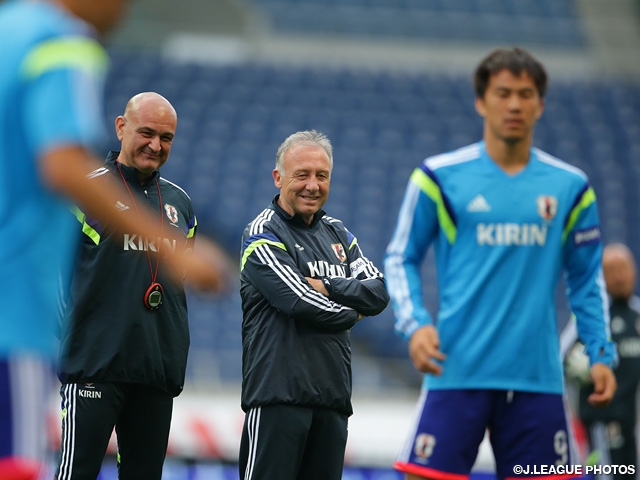 Alberto ZACCHERONI, Head Coach
We have set our plans on our physicality, tactics and techniques and held the Ibusuki training camp, calculating back from our first game in the World Cup, so our players may not have their sharpness and flashiness on their bodies, but I would like to ask them for judgements and sharpness on their mental part. Cyprus are a typical European team who are similar to Greece and have solid defense and have counter attacks. We would like to play our own football, acknowledging the strengths and weaknesses of the opponents. (On the three players who just returned from injuries) What's important is minutes played, not whether you on on the starting lineup or not. We'll consult with our conditioning coach and decide what we'll do. We would like to use the six spots for the substitutions to use as many players as we can.

MF ENDO Yasuhito（GAMBA OSAKA）
We lost our games right before the tournament four years ago, but this time we want to go to America (for a training camp) with better contents and results. We have some players who competed in the previous tournament (in 2010), and I believe that the team is going to the right direction if we pull ourselves together. No matter who we play against, it's important for us to show how we play, and we would like this friendly as a game that we can get in our first game of the World Cup with some confidence.

FW KAGAWA Shinji（Manchester United／England）
Playing for a country, you get supported by so many people, make you feel a sense of responsibility and it motivates you. So I would like to live up to all the expectations. As to having the number 10 on my back, I feel appreciation and pride. No matter who we play against, it's important for us to share good image with our teammates and come up with positive results. Keep moving is my style as well as Japan's style, and we will need everything, including team works and linkages. We want to fight as every individual gets to become one.

MF YAMAGUCHI Hotaru（CEREZO OSAKA）
We have three more games until the World Cup, and I feel good about my physical condition. I hope to show what we checked in the Ibusuki training camp. Every team has big, physical players, so I want to play steadily.

Charalampos CHRISTODOULOU, Head Coach
This is the second game since I've begun leading this team, and we are currently in the stage for rejuvenation developing younger players. In tomorrow's game, we would like to use many young ones mixing up with veteran players. We consider Japan have abilities and certain track records and are a team who are going to get stronger from now on, I expect our team will get valuable experience through tomorrow's match, learning from a good role model like Japan.