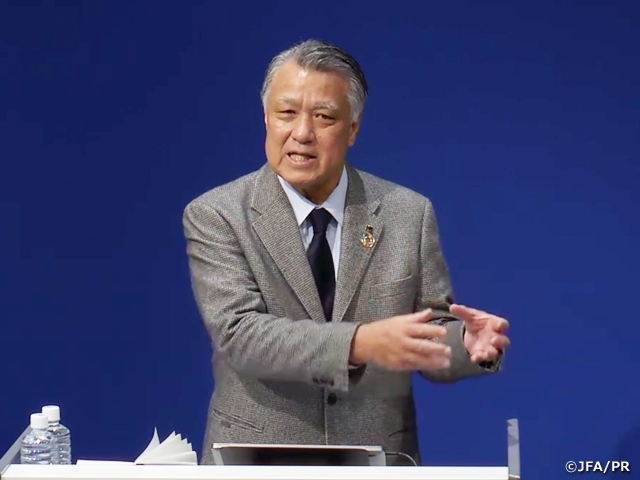 Each year, the National Technical Director Conference has been held over a two-day period, bringing together Technical Directors and JFA coaches from prefectural and regional football associations (FAs) throughout the country. However, due to the spread of Covid-19, the conference was held in a remote format with a one-day programme this year. In addition, FA coaches (a person dedicated to the technical affairs of each prefecture) will be participating the conference from this year.

The conference was divided into morning and afternoon sessions, with the morning session being dedicated to reporting various initiatives taken by JFA and to share future policies and directions with each FA. In the afternoon, discussions were held by each of the nine regions (Hokkaido/Tohoku/Kanto/Hokushinetsu/Tokai/Kansai/Chugoku/Shikoku/Kyushu), with JFA and each FA working together to exchange their views on future policies.

At the beginning of the conference, JFA President TASHIMA Kohzo, in his opening address, declared emphatically that “we will continue to carry out our activities while dealing with the Corona pandemic.” He also added, “We would like the Technical Committee to take the initiative in order to realise the JFA Declaration 2005. That is why we would like the Technical Director to create a stir within their respective Prefectural Associations. JFA would fully support their activities, so let's work together to further develop football in Japan.” The JFA Declaration 2005 outlines the goal of winning the FIFA World Cup™ and increasing the number of the Football Family of Japan to 10 million by 2050.

JFA Technical Director SORIMACHI Yasuharu followed by stating that regional development is the future of football, and that JFA will work together with each region to develop football, while also explaining JFA's organisational structure in relation to the Technical Committee. Deputy Technical Director ONO Takeshi introduced European and Asian football trends and discussed the future of Japanese football. He also spoke about the “Technical Centre” concept, region-based development, and the importance of each region/FA working together to create Japanese football in its own unique way for the next 10 to 100 years. 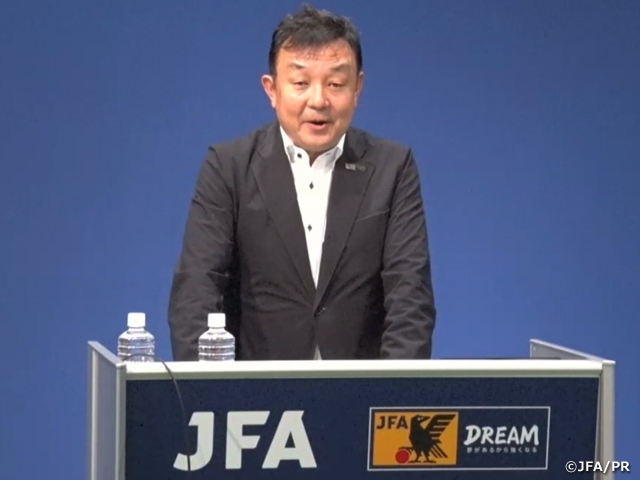 Next, Director KAGEYAMA Masanaga of the JFA Technical Committee Youth Development Department, gave a presentation on the “Japan's Way,” which is Japan's National Football Philosophy, a roadmap towards becoming the happiest footballing nation in the world. Various initiatives to realise the “Japan's Way” were mentioned, as each project manager reported on their initiatives and activities.

Regarding grassroots football, Director NAKAYAMA Masao of the JFA Technical Committee Promotion Department, mentioned that “Grassroots football is not only about children, but also about a lifelong involvement with football for those who encounter the sport.” He continued to mention that he would like to increase the number people involved in football and explained how to organise game environment for children's football, with footages of small-sided games.

In women's football, Deputy Chair IMAI Junko of the JFA Women's Committee shared information on the WE League, reformation of the women's game environment, promotion initiatives, the boys and girl’s category of the National Sports Festival of Japan, and training and application of female coaches, as she shared her aspiration, “I want to contribute to the development of women's football for the sake of Japanese football as a whole.”

JFA Futsal Technical Director KONISHI Teppei took the podium to speak about futsal, describing the futsal vision that the Futsal Committee has been pursuing since 2016. He also talked about the new organisational structure and the appointment of directors for each of their departments - Strengthening, Development, Coach training, and Promotion - as well as their initiatives for development and promotion.

As for goalkeepers, JFA Goalkeeper Project Leader KAWAMATA Noriyuki explained the action plan of the goalkeeper project, with a particular focus on development measures. He said that ever since they organised the goalkeeper project across the country, they have seen significant improvements in the players' footwork and other skills compared to the past. JFA Physical Fitness Project Leader KANNO Atsushi shared his thoughts on building physical fitness necessary to compete on the world stage, “We want to improve the physical literacy of the players themselves.”

In terms of the strengthening and development of the players, coach MORIYAMA Yoshiro of the U-16 Japan National Team shared the challenges and achievements he felt on the field as a national team coach, while Director NISHIKAWA Seidai of the JFA Technical Committee Coach Training Department, explained their coach training project, saying that “We want to implement measures to increase the quantity and quality of our coaches.” The two spoke about the importance of creating environments where anyone can learn, anytime, anywhere.

Director Kageyama concluded the morning session by saying “It is very important that we turn our attention to grassroots and player development, which are the two core pillars of our sport.”

In the afternoon session, participants were divided into nine regions to hold group discussions, where Technical Directors, JFA coaches, and FA coaches shared various opinions on how to improve their regions, creating a lively exchange of ideas. Each region then made a presentation to all participants and shared what they had discussed.

Technical Director Sorimachi returned to the podium at the end, reflecting on the conference and saying that “If the coaches on the front line are aiming to win the next game, the technical directors need to be aiming to win the next decade.” In response to the presentations made by the nine regions, he said, “We want them to carry out positive activities while considering their regional characteristics, and JFA will provide support for this.” The JFA Technical Director concluded the conference by saying, “I hope we can work together so that we can be all smiling together in ten years' time.” 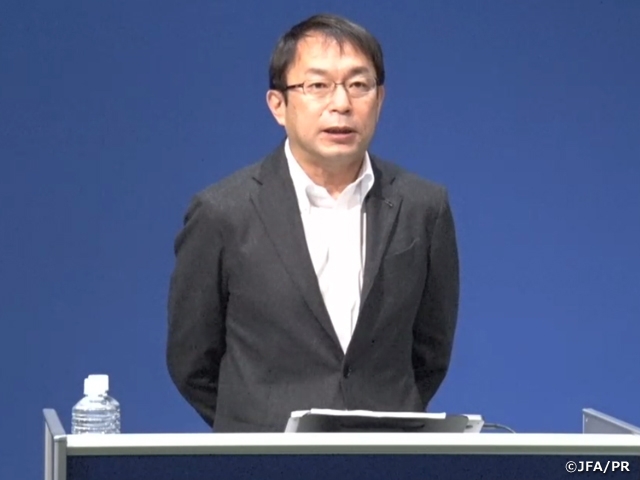