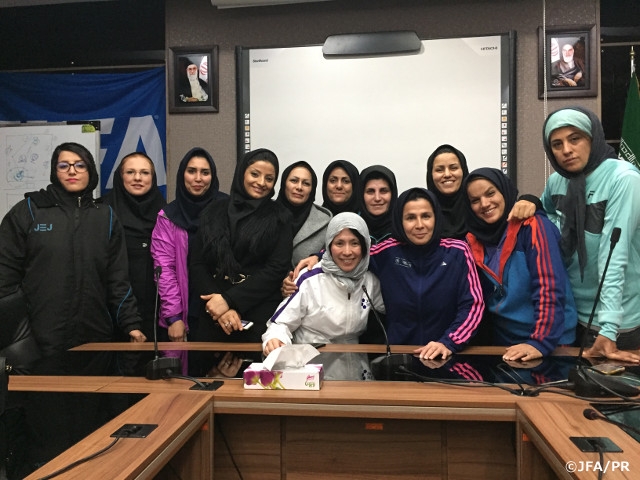 Ms. NODA has paid a visit to Tehran between 7 and 8 December in order to exchange opinions with Iranian women coaches and to give some lectures about Japanese women’s football as well as holding practical sessions. This visit was organised by the Iran Football Federation, which has a partnership agreement with the Japan Football Association (JFA).

Although Iranian women are allowed to play sports, including football, but actually they cannot play in front of men along with many other restrictions. Hence, it is not easy at all for Iranian women to play football.

Most of the women coaches, who attended this event, are certified as a Class A or Class B licensed coach of the Asian Football Confederation (AFC). They work as coaches for all national team categories and Iranian Super League club teams.

Ms. NODA has implemented practical and theoretical sessions for those licensed coaches, while these sessions were about basic techniques done within two days in Iran. 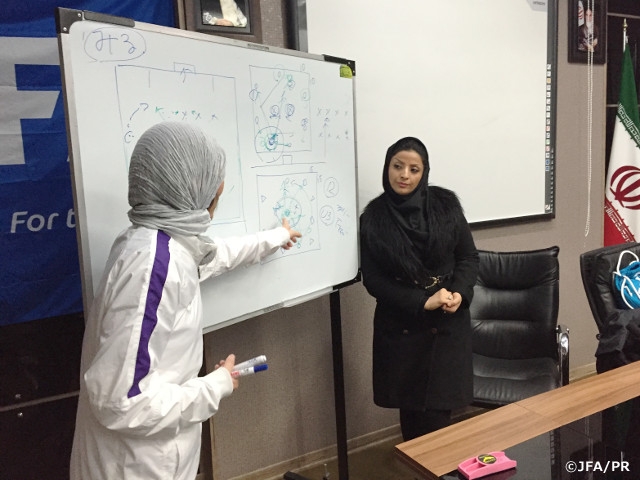 NODA Akemi, (Japan Football Association, Women's Committee Chairperson)
To be honest, I didn’t have many positive impressions about Iran before. However, during this visit, I realised that many people are very eager to learn, they have aims and goals to achieve. I think the quality of Iranian education is very high and women here seem to be smart. If they improve their technical aspects, they will have a good opportunity to become one of the strongest teams in the world.

The current situation of Iranian women’s football is quite similar to the one when the Japan Women's National Team was first assembled about 30 years ago. Although I cannot say that the environment is a good one at all for Iranian women to play football, but the players purely enjoy playing. I had a great time during this short visit by directly listening to local opinions and playing together with other women. I appreciate the Iran Football Federation for creating this opportunity as well as for their sincere and kind support.

ARAB Ameri, (Iran Football Federation, Women's Committee Chairperson)
I’m very pleased that we were instructed by NODA Akemi, the Women's Committee Chairman. I hope that JFA will support the Iran Women's National Team even more. Japan have achieved their aims, including winning the FIFA Women's World Cup 2011 in Germany, only because of their devoted efforts. I realised that inviting experienced Japanese women coaches for the Iranian national team is a very important issue, in order to follow the footsteps of Japanese women’s football.

MAHNAZ Amirshaghaghi, Assistant Coach (Iran Women's National Team)
It was a great opportunity to learn Japanese coaching methods from Ms. NODA. With some support from the JFA, we can improve the level of Iranian women’s football and book a place in the FIFA Women's World Cup, which is one of our dreams.

LEILA Vaghari, Coach (U-19 Iran Women's National Team)
I hold the AFC certification, but I realised the importance of the basics through lectures by Ms. NODA. And I understood how Nadeshiko Japan have been competitive internationally. Although I believe in the ability of Iranian players, which may lead us to the FIFA Women's World Cup, we definitely need a high-quality coach to achieve our aims. 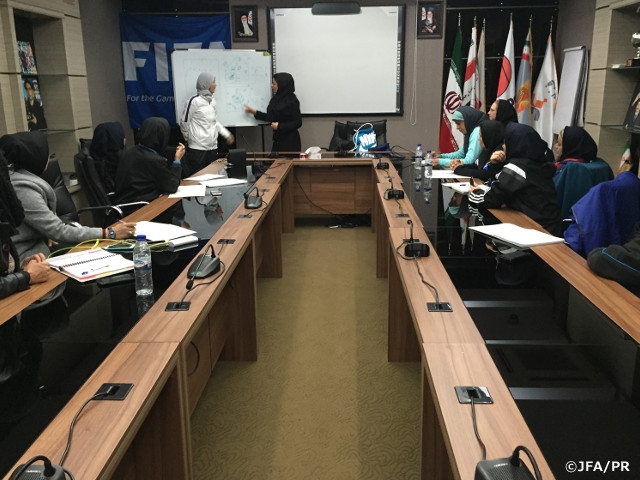