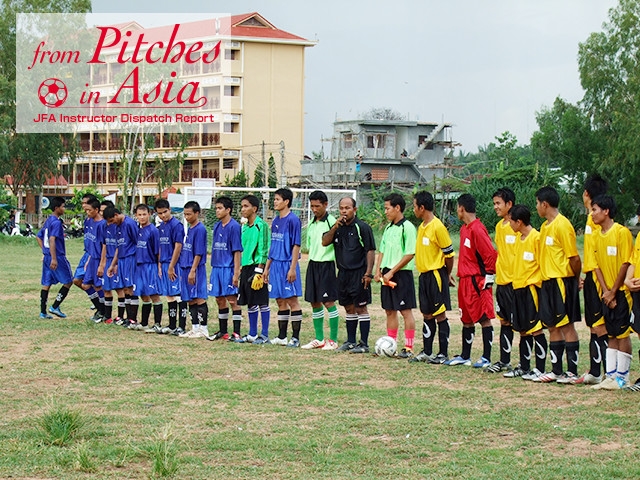 “From the Asian pitch” series introduce the voiced of the coaches who work in Asian countries. The fifth edition is from Mr. KARAKIDA Tetsu, who serves as the Referees Director in Cambodia.
Cambodia will be place in the same group with Japan in Group E for the second qualifying of the 2018 FIFA World Cup.

Because Cambodia had never gotten through the first qualifying, there was no electrifying mood whatsoever previously during the qualifiers. Thus, that they have advanced to the second round is a historic event. As they were grouped with Japan after a draw, they have drawn some national attentions like “That's insane!” “It's a golden opportunity for the future of Cambodia to play with a first-class team.” Both Honda and Kagawa have already been known well, and there are a lot of people in Cambodia who wear the Japan national team jerseys as their normal clothing. The first two games for Cambodia in the second qualifying will be played at home, but it's too bad that they will overlap with the semifinals and final of the SEA Games (Southeast Asian games). The SEA Games is such an important event for Cambodia and their team consist of the Cambodia U-23 players and some over-age players. Because we will need another team for the second qualifying of the World Cup, we are currently thinking of how we should for the teams. OHARA Kazunori, our technical director, will take care of the team for the qualifying. 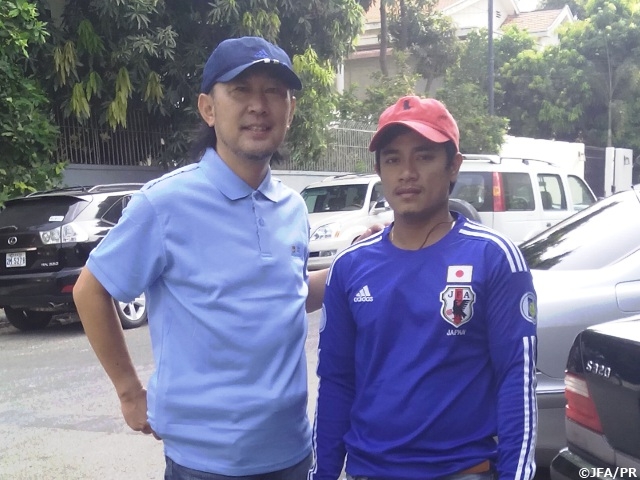 A trio of Cambodian referees officiated an international friendly between the U-22 Japan national  team and U-22 Myanmar national team in Chiba on 11 March. Three international chief referees and five international sub-referees were selected by the rankings and they were instructed to perform what they've done in their past training and their experiences so they would get ready mentally. “One of the teams was of the ASEAN region, Myanmar, so we didn't get nervous all that much. The pitch condition was great, so we didn't have to be too cautious about things like irregular bounces,” they said after the game. Meanwhile, they had to deal with the cold weather. Because the temperature seldom get U-20 degrees back in Cambodia, it looked difficult for them to adjust to the March weather of Japan. It was the first time for Cambodians to officiate a game in Japan, and it gave a big impact. It seems to have inspired other officials in Cambodia.

Referee development on the try-and-error basis

When I came over to Cambodia back in 2008, there was no instructors and there were no notions of physical and knowledge phases (understanding of the game rules) and technical portions (accuracies of judgement and management), so we have no idea where to start with.  So we started with the two points: 1) Take the best positions to make accurate judgements. 2) Have better fitness to take the accurate positions. Regarding 1), it had been the mainstream for them to pursue the ball, so we let them watch videos and tried to let them understand that they should anticipate plays and go ahead where the players would go to make more accurate judgements as well as make precise judgements in the penalty box. Previously, it was usual for them to blow whistles on penalty kicks from 30 meters away. For the measurements on 2), we would have interval trainings once a week with the entire members to develop their sprinting ability to “go ahead” as well as their stamina so they could maintain their speed with the players' counter plays. Before that, it seems that they had just called it a training to run some 10 kilos in about one hour.

Currently, a total of three Japanese coaches, IKI Yusuke (Cambodia Football Academy/U-15 Cambodia national team coach), OHARA Kazunori (technical director) and myself, have been dispatched to Cambodia from Japan. Because they have the custom of making things with their connections, they seemingly prefer foreigners, who have no relations with them. Especially the Japanese' unselfishness and fairness are strongly favored in Cambodia, and Japan is recognised as the leaders of the Asian football. The U-15 and U-17 leagues that began last year based on the suggestions of Mr. Iki have given more places for those youth generations to play while they have also given the young players who are aiming at making the top league and those mid-level officials who need to accumulate experiences to go through practical lessons. The officials have gained big achievements through the concentrate sessions, in which they officiate games in the morning and go through video analysis, video tests and discussions in the afternoon. Also, as Mr. Ohara assumed as the technical director, we expect that we will share more amount of information more quickly.

What we expect going forward

In Cambodia, it is their status quo that their environmental improvement have been made only in Phnom Penh and another one state that's attached to the capital city. We believe that there are talented people in local places and we would like to stretch out our training center activities with Mr. Ohara (players level) and Mr. Iki (youth level) so we can put the lights on more number of people. Because of the civil war that lasted for about 20 years from the 1970s, Cambodia have lost their educational basements and there is a lot of unfair hirings, and in fact, there's very few chances to see that they get fair assessments. So at least in football, we would like to create the circumstances that the players and officials will be able to get good instructions, get fair and proper assessments with their abilities, and have dreams and confidence for the future. 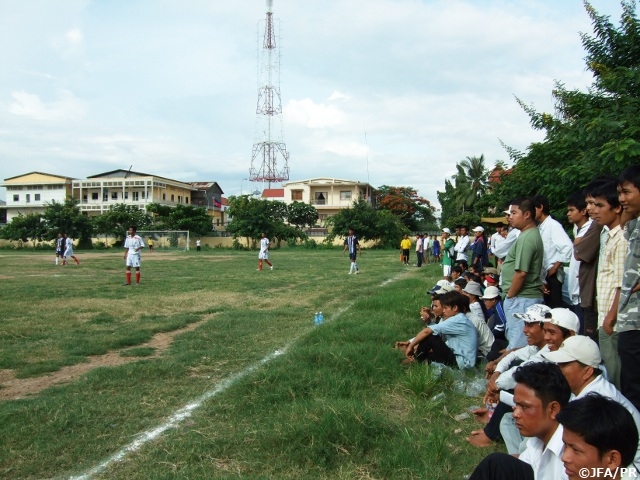 *1：The officials for the U-22 international friendly match go through practice on 11 March, 2015
The details are here