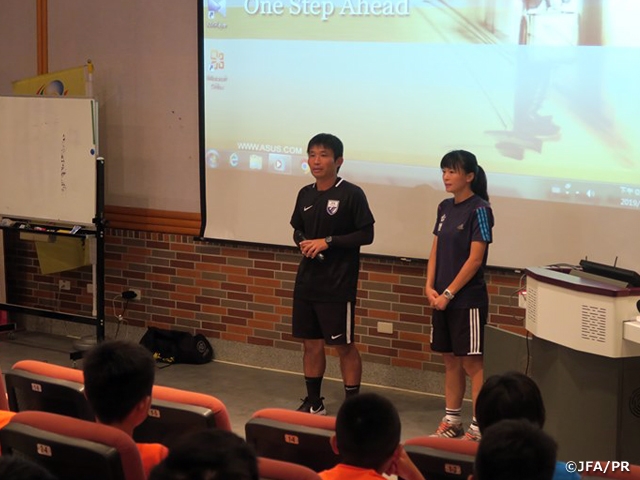 JFA instructors have been dispatched to this summer camp every year, and this year’s camp marked the 10th year of their involvement. 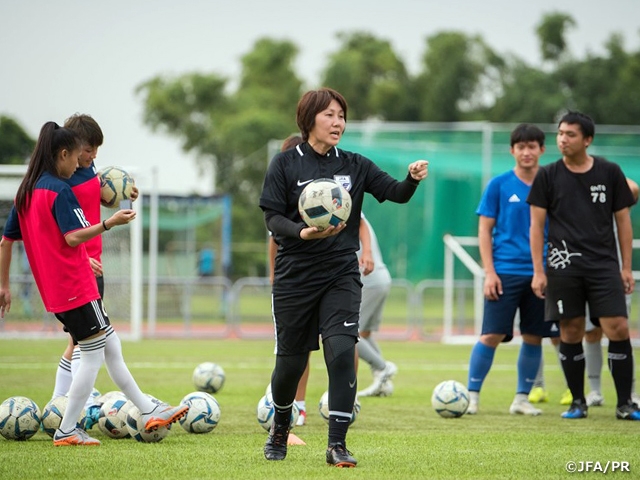 MIYAGAWA Shinichi, Coach (JFA Academy Uki)
I took part in the Chinese Taipei “Football Academy” as an instructor from 8 to 12 July. This event is equivalent to the Japanese National Training Centre, and instructors from Japan participate in this event every year. This year was the 10th edition of the camp and many players and coaches of the junior high school boys category gathered from all over Taiwan. With the players scheduled to arrive on the 9th, we held lectures and coaching sessions to prepare the coaching staffs beforehand. The coaches displayed great enthusiasm and the players responded by playing with great pride to represent their region. I am honoured to be a part of this process of developing young players and coaches that will lead the future of the Chinese Taipei football community.

KIMURA Rie, Coach (JFA Academy Imabari)
I participated in the “Chinese Taipei Academy Summer Camp” held in Taiwan from 19 to 23 July. We utilised the facilities of the sport university in Chiayi City and the camp was conducted with the support of the university students. During the camp, we held refresher courses for the coaches in the first 2 days, while the remainder period of the camp took place in form of a training centre camp. We saw variety of age categories among the participants, ranging from junior high school girls to adults, however, this camp implemented the training menus conducted based on the U-14 women’s category of the Japanese National Training Centre. In the first couple of days, we gave lectures and held practical training sessions for the coaches to go over the five main themes involving “fundamental techniques”, “offence” and “defence” following the actual training sessions by the coaches to the participating players of this camp. This year, we saw many female coaches participating the camp, some with zero football experience, but everyone was seen getting themselves involved at the training sessions with great motivation, while actively exchanging opinions at the discussions and lecture sessions. Once the players arrived at the camp, the coaches actually conducted the training sessions. The coaches implemented the coaching methods and game analysis they have learned at the lectures and showed great enthusiasm to give thorough instructions to the players. Their passionate instructions guided the players to showcase a much improved performance on the final day. This was our 10th year since we have started this event in Taiwan, and we saw great professionalism and enthusiasm from the participating coaches and players. Through this camp, I was able to feel the strong possibility and potential from these young coaches and women’s football players in Taiwan.

Men’s Academy Coach
This is the 10th year of this football academy held by the Taiwan Sports Administration, Ministry of Education. I was informed that this year’s JFA instructor, Mr. Miyagawa, is a coach for 13 to 15 years old kids at the JFA Academy in Kumamoto, and he is a very experienced coach. He emphasised the importance to closely observe both offence and defence. He has also reminded us the importance to conduct the physical trainings at a daily basis. While we coached the players, Mr. Miyagawa occasionally intervened to address his opinion, sometimes re-enacting the scenes to give a pointer on both the players and coaches. When the players lacked energy or couldn’t follow instructions, he would point out that there are issues with the way the coach is organising and directing the training session. It helped us out because he would not only point out the issues but address the reasons for us. I was truly moved by the passion showcased by Mr. Miyagawa, his strong will to heighten the overall level of Chinese Taipei’s football, and his respect towards the players. This camp has allowed me to review the quality of my daily trainings and gave me great motivation to move forward. I am grateful for this opportunity to participate in this camp.

Women’s Academy Coach
This academy is one of the events I always look forward to each year. Coming to this academy makes me feel and realise that football is constantly evolving. In the past 10 years, all the instructors are from Japan, but every one of them have coached us with great emphasis on the small details. They have addressed the importance to implement different training methods depending on the players’ age groups. With the support of many people, we are able to conduct this academy each year. This is a very significant event for the coaches and players from Taiwan, and I hope that this tradition will continue on. I would like to see more new players attend and more coaches to join from all over Taiwan to attend this academy as a refresher course. I will do my best to share and pass on these precious knowledge of football to the younger generation.

Men’s Academy Player
I usually play for a futsal team, so this academy has given me a wonderful opportunity to learn about the techniques and strategies of football. I was able to learn so many new things at this academy! We were provided with textbooks on techniques and strategies, while coach MIYAGAWA Shinichi came from Japan to give us lectures. I hope to implement all the things I’ve learned at this academy and continue to work hard so that I can utilise the new techniques in an actual match.

Women’s Academy Player
I was happy that I had the chance to come here play and learn with other football players. This will be a good experience for me and my football team. And here, it provided us delicious and nutritious food as well as high quality training. This was my first time to come here which helped me to learn many things, and this is a good place to challenge your ability. The coach here was very friendly and kind and they try to teach us many things and give us much help. I learned many things such as how to defend and how to have a better skills at shooting, attacking and also many other things. I wish that I have time to come here again next year, and I wish that I can help my football team in the near future. And the most important thing is that I found many friends here that have the same hobby with me, which is football. I would also like to thank all of the coaches who taught me many skills, and chef who cooked delicious food for us, also especially my teammates helped me a lot. If I had the chance to come here again next year, I wish that I can learn more and more skills. This occasion was a good experience for people who want to learn to play soccer. And I wish the idea of “soccer school” can develop to other counters and teach every people who want to learn soccer. Finally, thank you again for everyone that was involved in this training camp. 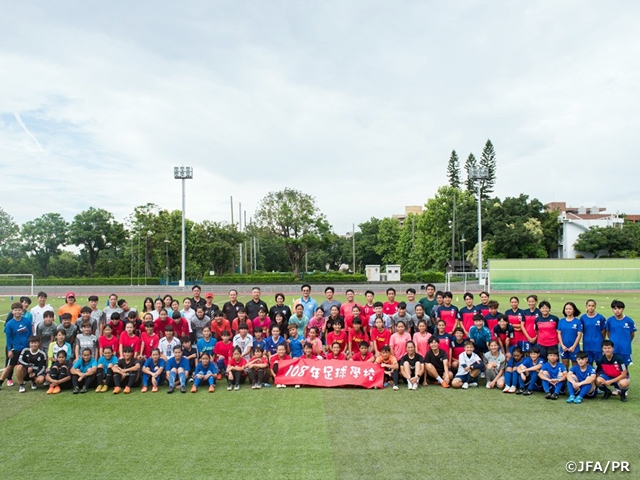