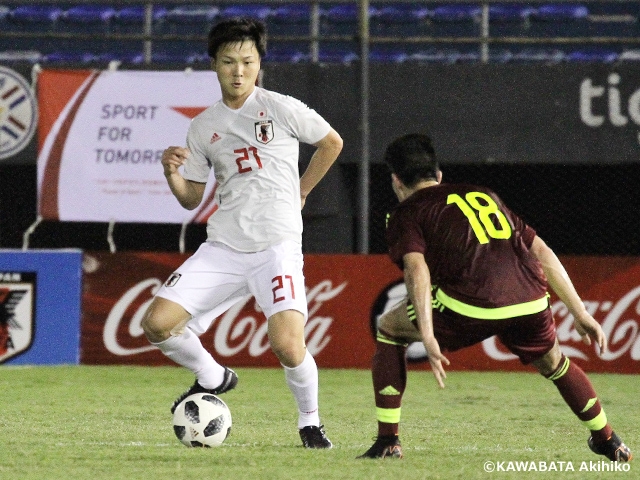 On Friday 23 March, U-21 Japan National Team played U-21 Venezuela National Team in a football exchange tournament held in part of the SPORT FOR TOMORROW (SFT) programme supported by the Japanese government. In their second match held in Asunción, the capital of Paraguay, Japan grabbed their first win of the tournament after the game went into penalties with a score of 3-3, Japan bested Venezuela 4-1 in penalties.

Both teams went into the match with fresh line-ups, as Japan rotated 10 players from their previous match, while Venezuela replaced eight players. Just three minutes into the match, defender SHIIHASHI Keiya reacted to a corner kick delivered by midfielder HARIGAYA Takeaki, and struck the opener. Shiihashi, who had scored in his J. League debut, managed to score in his national team debut also, later stating, “the delivery was perfect, and I was lucky to score.”

In the 15th minute, forward MAEDA Daizen initiated an attack with his post-play. Midfielder FUJITANI So dribbled up the right flank before sending a cross to the centre, which Maeda scored with a diving header. He later proudly described his goal as “a scrappy goal that best suits me,” as he also scored his first goal as a member of the national team. 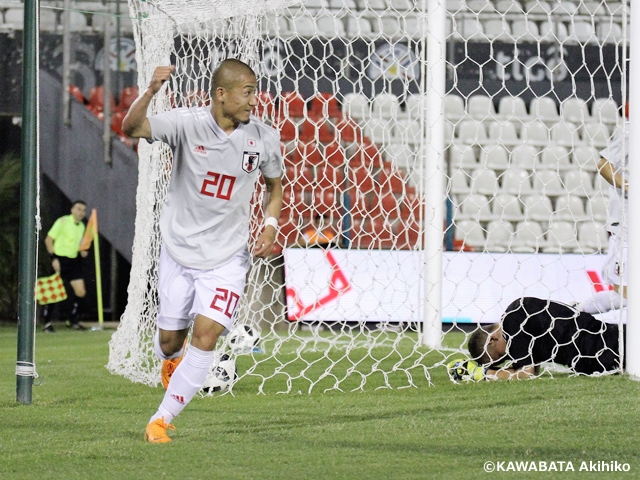 Japan, who had shown their efficiency in scoring, continued to take the initiative of the game under the leadership of SAKAI Daisuke and MATSUMOTO Taishi in the midfield. The team managed to keep possession, while coping with the opponent’s pressure. Japan kept threatening the opposing goal, as ENDO Keita sharply dribbled up to initiate an attack almost earning a penalty kick in the 37th minute.

Venezuela’s momentum continued after halftime, as they sent five players off the bench in the second half, whom Coach MORIYASU Hajime described as “quality players, who has experienced the FIFA U-20 World Cup Final last year.” It only took 10 minutes for the South American side to take the lead, as the equaliser came off a corner kick in the 47th minute, while the go-ahead goal from Chacon came in the 54th minute. 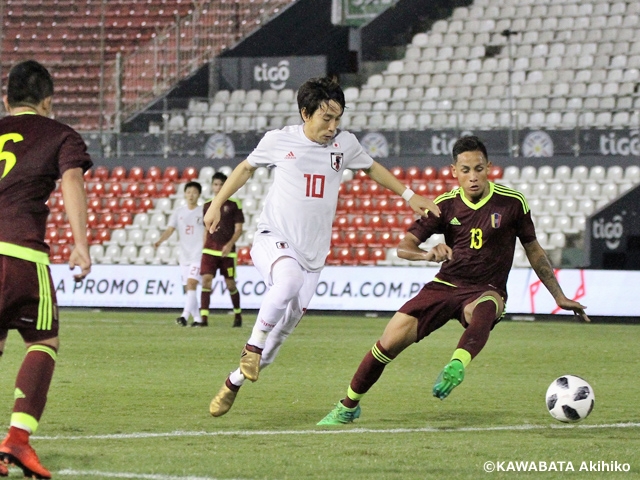 Coach Moriyasu reflected on the match with a stern expression on his face, “we allowed our opponent to attack too much. It was an obvious situation where the losing team would press hard to get back into the game. We must be able to stay patient and retake the initiative.” The stretch became a “truly regretful period” for Japan, as the goalkeeper YAMAGUCHI Louis described. Even after taking the lead, Venezuela came close to scoring as one of their shot struck the goal post.

Japan stayed positive despite conceding consecutive goals in a short period of time, managing to regain their rhythm. In the 68th minute, Maeda reacted to a through ball delivered by MIYOSHI Koji, who had just come off the bench, and ran into the space behind the defensive line. This play drew a foul from the Venezuelan defender, earning a penalty kick for Japan. Maeda converted the spot kick to level the match.

After this goal Japan retook the initiative, suppressing the Venezuelan side. However, the team failed to score another goal against the solid defence displayed by their opponents. The match went into penalties, where goalkeeper Yamaguchi excelled. He showed superb saves to deny two of the opponent’s attempts, leading Japan to a 4-1 victory. With this win Japan earned two points, while the losing end in penalties earned one point following championship regulations.

MORIYASU Hajime, Coach (U-21 Japan National Team)
We faced the first and the second match with the same spirit. But our condition had improved, so that meant a lot. We had to play the previous match following a long flight, and deal with the climate change and time difference. As a result, players weren’t able to display their top performance. The improvements in their condition had a direct effect on their performance. In our last match against Paraguay, we would like to further improve the players condition and head into the match as fresh as possible. I want my players to play with confidence and showcase a great match.

GK #23 YAMAGUCHI Louis (Extremadura UD/Spain)
It’s frustrating to have conceded three goals. However, it meant a lot that our team came from behind to level the match. After conceding the third goal, I was determined not to give away any more goals, and managed to keep ourselves in the match. It’s great that I was able to stop some shots in the penalty shoot-outs, but we couldn’t have won the match without our spot takers scoring those goals, so it was a team effort.

MF #11 ENDO Keita (Yokohama F. Marinos)
We took the initiative from the early minutes of the match, and managed to keep more possession than we did in the first match. Although we managed to stretch our lead to two goals, we conceded goals when we shouldn’t have. Our players up front did a great job levelling the match after we let the opponents turn the match around at 3-2.

FW #20 MAEDA Daizen (Matsumoto Yamaga Football Club)
In order to stay in the team, I have to earn a spot by posting good results. So, I was really keen to score in any way. The first goal I scored was such a scrappy goal, and I thought it suited my style well. South American teams consist players with strong physicals and great physical abilities, which made the match that much difficult, but I tried to stay competitive as much as possible./p>