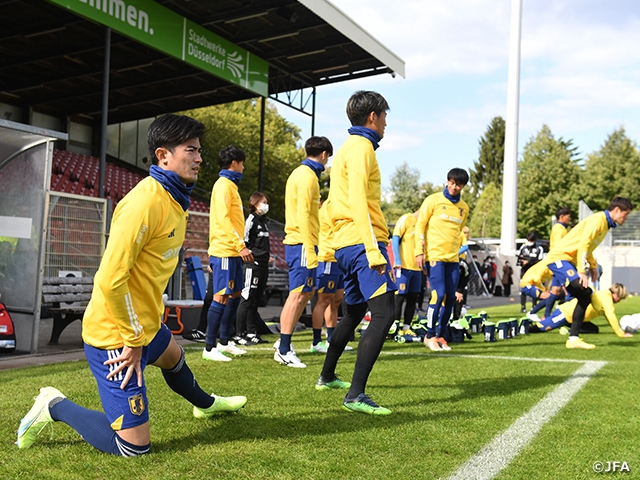 On Wednesday 21 September, the SAMURAI BLUE (Japan National Team), who are currently on a tour in Germany, held a training session behind closed doors ahead of their KIRIN CHALLENGE CUP 2022 match against the USA National Team.

In a session held at a venue in Dusseldorf, all 30 players, including NAGATOMO Yuto (FC Tokyo) and SOMA Yuki (Nagoya Grampus) who trained separately on the day before, took part in the team training.

During the first 15 minutes, in which the session was opened to the media, the players were seen going through their warmup routine before engaging in a passing drill.

The goalkeepers went through their own routine, as they worked on their catching against close range shots, approach against crosses, and long feeds.

The session lasted for about 90 minutes, as the team worked on their tactics behind closed doors. Players were also given extra time after the team session, as players spent the time on their own to polish their skillsets.

This training camp will be the final opportunity for the team to work as a group ahead of the FIFA World Cup Qatar 2022™ in November. The next time the team is assembled will be in Qatar with the predetermined squad for the World Cup. With that in mind, many players, including team captain YOSHIDA Maya (FC Schalke 04), stressed the importance to use this activity to improve their common understanding and coordination, and to work out the details.

“Following the pre-season in September is a time when the style of each of our clubs is strongly reflected by the players, so we need to reinforce the shape and approach of the national team once more,” said Yoshida, as the veteran defender also commented on his take for the World Cup, where Japan will face Germany, Spain, and Costa Rica, “The balance between where to be brave and where to play realistically is going to be important. It's important to brush up on that thought.”

Both of Japan’s opponents for this tour, USA (Friday 23) and Ecuador (Tuesday 27), are also preparing ahead of the FIFA World Cup Qatar 2022™. In the latest FIFA rankings, the USA are ranked 14th and Ecuador 44th, compared to Japan's 24th.

SHIBASAKI Gaku (CD Leganes), who have the experience of playing in the 2018 FIFA World Cup Russia™, commented, “We will see how much confidence we can build up as a team. It's a two-match series where we're trying to prepare ourselves mentally enough to compete in the World Cup, and we must also try to work on tactics and all sorts of details, even if they don’t quite match up our playing style.”

“We need to work on the details and make this a worthwhile camp,” said GONDA Shuichi (Shimizu S-Pulse), as the goalkeeper also mentioned, “If everyone can do their best to help the team win, the team will naturally become stronger and more cohesive.” 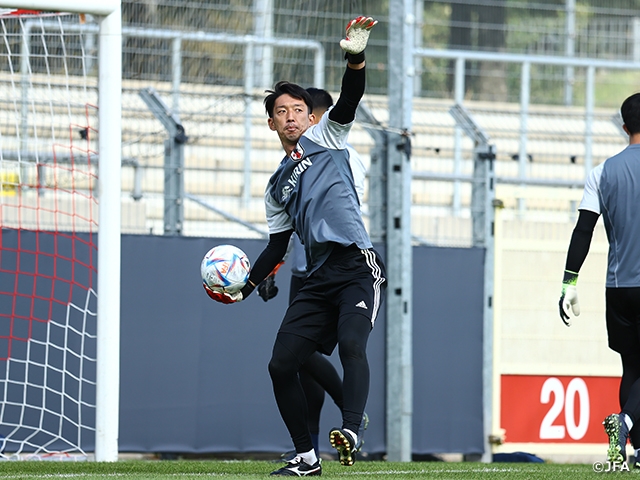 The team will hold their official training session at the match venue, Dusseldorf Arena, on Thursday 22 September.

DF #22 YOSHIDA Maya (FC Schalke 04/Germany)
With limited time to prepare for the World Cup, these two matches will serve as our final preparation phase. We must simulate all sorts of situations that could occur at the World Cup, while also striving for victory. We are going to face two teams who are also preparing for the World Cup, so these are not going to be easy matches. These matches will also have an impact on the final selection process for the World Cup, but the players have been selected here because of the work they have done leading to this point, so our approach will remain the same. With that being said, the team’s priority is to brush-up on what we have built up thus far. That is where we need to focus on. It will be too late if we start talking about things once something irregular happens at the tournament, so I think we need to get everyone on the same page on how we are going to approach certain situations, such as how much risk we are going to take or how much pressure we are going to apply when trailing behind in a match.

MF/FW #7 SHIBASAKI Gaku (CD Leganes/Spain)
With this being the team’s final training camp ahead of the World Cup, coach Moriyasu explained to us what these two matches will mean to us. I think everyone understands the significance and even though we are all competing to earn a spot in the final roster, it is important that we all try to stay on the same page with each other, because we don’t have very limited time ahead of the tournament. We are in that crucial time when we need to work and improve on our teamwork. We will see how much confidence we can build up as a team. It's a two-match series where we're trying to prepare ourselves mentally enough to compete in the World Cup, and we must also try to work on tactics and all sorts of details, even if they don’t quite match up our playing style. I think it's going to be a series of matches where we'll be working on various details, but personally, I will do what I can for the team as always. That's all.

MF/FW #10 MINAMINO Takumi (AS Monaco/France)
I felt like I had to make a case for myself at my club to prove that I deserve to be called up to the national team. The best way to be recognised by your new team is to produce results, so although I am not totally satisfied with my overall performance, I am happy to have scored my first goal. These two matches are the final tune-up for the World Cup as a team and are two very important matches. In a way, I think we will have to come up with a conclusion on how we are going to compete at the World Cup. Although we will be facing vastly different teams, we must make conscious efforts to simulate the matches against Germany, Spain, and Costa Rica, and make them worthwhile matches to prepare for the World Cup. I personally will do my best to contribute to the team’s victory.

MF/FW #21 DOAN Ritsu (SC Freiburg/Germany)
I feel like I am getting in better condition. I am not worried because I know I could perform well as long as I play my usual game, so if I am given the opportunity, I will just focus on doing my best. The tactics of the national team and the club are different, so I can't do everything like I do at my club, but I have been making conscious efforts to think about when to go inside and when to stretch out on the flanks for the last year or so. I feel like those are some of the aspects I can contribute for the national team, so I will try to adjust with the way my teammates play on the pitch. With only two months left until the World Cup, tensions are undoubtedly running high. We must not forget the disappointing loss we suffered in the last match in June, and we have many players who have changed teams since then. We are in full strides to communicate with each other and making final corrections to what we have built up. 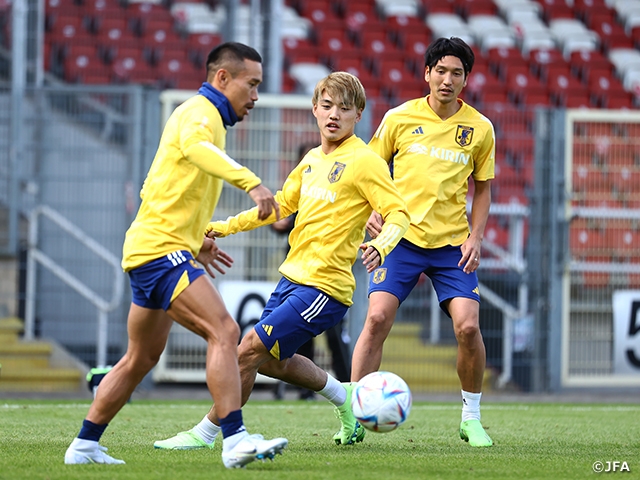 MF/FW #26 UEDA Ayase (Cercle Brugge KSV/Belgium)
I think it has given me a lot of experience playing in a completely different football environment, where people speak a different language, and play with a different level of intensity, and although there were matches where my style of play didn’t match up, I think it has stimulated me to draw more out of myself. What I am asked for will change depending on the formation, combination of players, and time of the match, but as a forward, I am determined to score goals regardless of the circumstance. I know I am capable of producing results, so I hope to capitalise on the opportunities I am given. There may be times where we play against our own tactics and theories, but I think that is necessary not only for my own appeal but also for the team's victory.