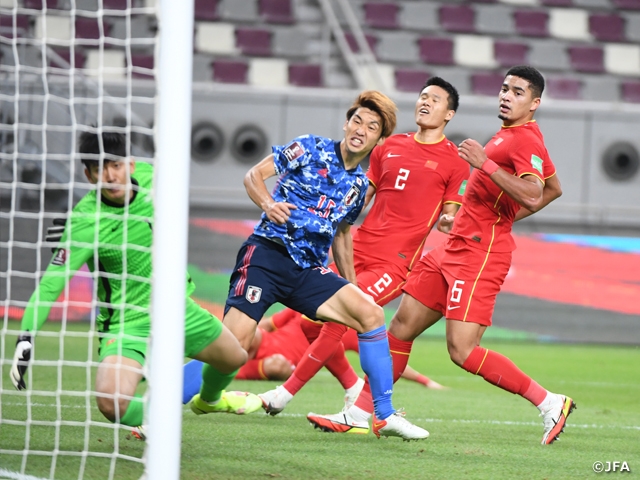 On Tuesday 7 September, the SAMURAI BLUE (Japan National Team) faced the China PR National Team in their second match of the final round of the AFC Asian qualifiers (Road to Qatar) at Khalifa International Stadium (Doha). Japan earned their first win in the final round thanks to the goal scored by OSAKO Yuya (Vissel Kobe), making a step forward towards qualifying for the FIFA World Cup Qatar 2022™.

Following their loss to Oman on Thursday 2, Japan spent their time recovering their conditions, both mentally and physically. Despite stumbling in the first match, Japan started off the second match with great aggression to take the initiative.

For this match against China PR, coach MORIYASU Hajime made four changes to their line-up, naming KUBO Takefusa (RCD Mallorca) and FURUHASHI Kyogo (Celtic FC) to their attacking third along with ITO Junya (KRC Genk) and Osako. In defence, TOMIYASU Takehiro (Arsenal) made his return to the line-up while MUROYA Sei (Hannover 96) started for the first time since the international friendly match against Serbia in June.

Due to the affect of the Covid-pandemic, international matches are prohibited in China, forcing their national team to hold their home matches in Qatar. Following the 0-3 loss to Australia in their first match, China PR entered the match with a defence-minded formation, lining five defenders at the back.

With their opponent dropping deep in their territory, the Japanese players took advantage of their speed to make runs down the line while keeping the ball moving at a quick pace, as Osako responded to a pass of ENDO Wataru (VfB Stuttgart) in the 12th minute to take shot, followed by Furuhashi’s attempt in the 22nd minute, but their efforts fell short from finding the back of the net.

In the 23rd minute, Kubo exchanged passes with Osako to break into the penalty area and struck a right footed shot that deflected off the post. Kubo created another opportunity in the 38th minute, this time striking a shot from distance to force the goalkeeper to make a save. Ito responded to the deflection and squared the ball to Osako, who made a sliding effort to convert the chance, but the striker’s attempt struck the post before the paly was called offside.

The long awaited moment came in the 40th minute. Ito utilised his speed to break loose in the right flank and delivered a driven cross towards the box. It was Osako who responded to this cross, as he sprinted towards the near post and splendidly redirected the ball into the net. 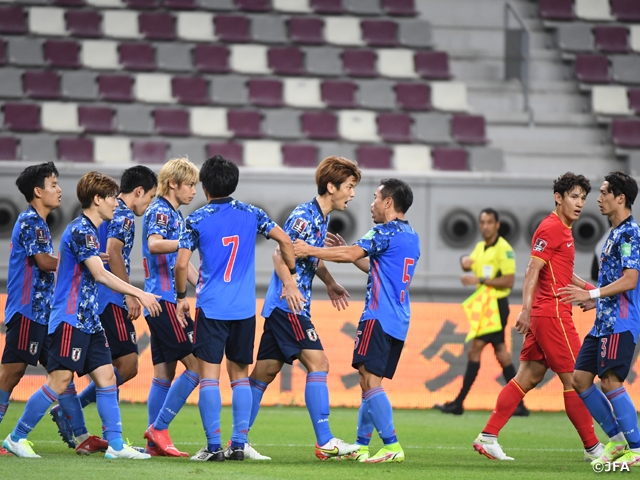 After taking the lead, HARAGUCHI Genki (1.FC Union Berlin) stepped onto the pitch after Furuhashi suffered an injury in the early minutes of the second half. With less runs being made by the team, Japan started to slow down, but Ito continued to apply aggressive pressure upfront to energise the team, setting up a shooting opportunity for Kubo by intercepting a ball deep in the opposing territory, but the play was called offside. 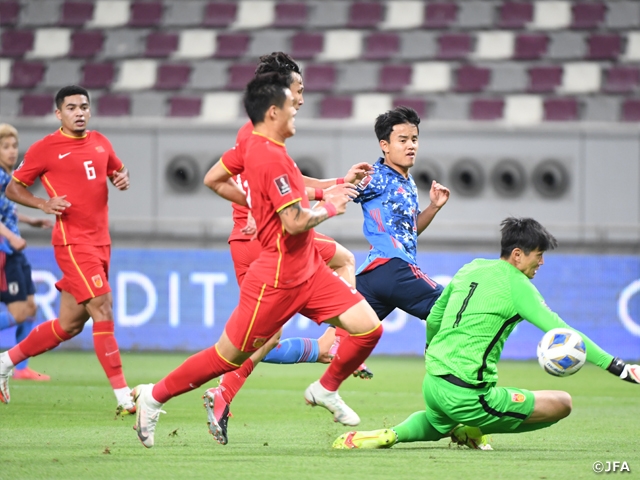 In efforts to change the dynamics of the match, China PR brought in two of their Brazilian-born players ALOISIO (LUO Guofu) and ALAN, adding layers to the offence orchestrated by another Brazilian-born player ELKESON (AI Kesen) and WU Lei who currently plays in the La Liga. However, the Chinese side struggled to find ways to break through the Japanese defence led by YOSHIDA Maya (UC Sampdoria).

Osako tried his luck in the 72nd minute, followed by Endo’s attempt in the 82nd minute, but both shots failed to capture the target. In the 87th minute, Shibasaki fired a powerful shot from distance, but his shot was parried away by the goalkeeper. Despite the final efforts, Japan fell short from extending their lead, but still walked away with their first win at the final round 1-0. Osako who scored the decisive goal was later named as the man of the match.

On this day, Australia collected their second win by defeating Vietnam 1-0 to claim the lead in Group B. Saudi Arabia also booked their second win, as they defeated Oman 1-0 to place themselves in second place. Despite sharing the same points, goal difference, and total goals, Japan trails Oman in fourth place based on their head to head record. The two winless teams, Vietnam and China PR follow in fifth and sixth place respectively.

Japan is now scheduled for an away match against Saudi Arabia on Thursday 7 October before welcoming Australia to their home on Tuesday 12 October.

The final round will be played in a home and away format until next March. Top two teams of each group will automatically qualify for the FIFA World Cup Qatar 2022™, while the third place teams will play in a play-off to determine the qualifier for the inter-confederation play-offs.

In Group A, Iran sits in first place after winning 3-0 against Iraq to secure their second win. Korea Republic earned their first win by defeating Lebanon 1-0 at home to place themselves in second place, while UAE trails in third place after their 1-1 draw against Syria. With a point each, Syria, Lebanon, and Iraq are in fourth, fifth, and sixth place in the respective order. 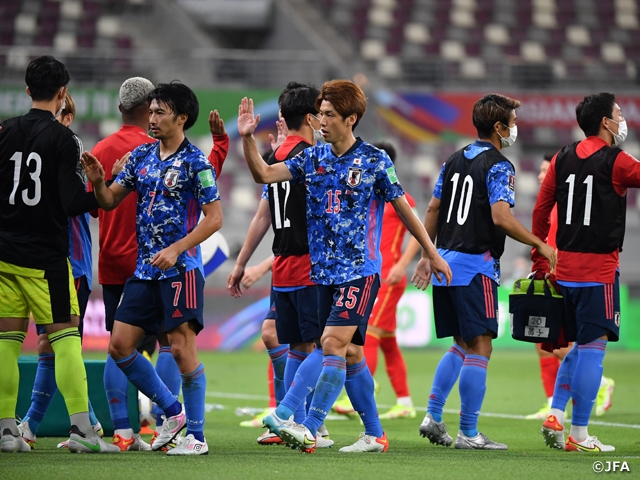 MORIYASU Hajime, Coach of SAMURAI BLUE (Japan National Team)
The players managed to rebound from the loss we suffered in the first match. Each player prepared well for this match against China PR and created a positive vibe through the training sessions. Although we entered the final round with the determination to fight through the tough competitions, the match against Oman made us realise that we had to be more committed to overwhelm the opponents and to win through the competition. We also managed to review the match and make the necessary adjustments in the mental, physical, and strategical aspects. China PR took an approach we were not expecting, but the players were flexible enough to make the necessary adjustments on the pitch and showcased their hard work to earn this victory. I think our opponent’s game plan was to keep the first half scoreless and apply pressure in the second half, but we managed to take control and score a goal in the first half. We continued to create chances after taking the one goal lead, and it would have been better if we were able to score the second goal. However, the opponents at the final round are not going to concede so easily. We should be proud of the fact that we managed to keep a clean sheet despite the high pressure at the end and prepare for the third match with confidence.

DF #22 YOSHIDA Maya (UC Sampdoria/Italy)
Although we are not satisfied with our performance, we were still able to earn three points, which is the most important thing. We need to make this the standard and try to make the most of each match. It is not easy to break through a defence when they are dropping that deep, but we managed to keep our composure and share the vision to create opportunities through the flanks. We also focused on mixing one-touch plays to take the opponent by surprise. We were not satisfied with a 1-0 victory, so we kept seeking for our opportunities to score our second goal, but we should be proud of the fact that we managed to keep a clean sheet against an offence with numbers of Brazilian-born players. If we can win the two matches scheduled in October, we will be tied in first place with nine points. This is our chance to redeem ourselves and I believe these two matches will be the key to this round. I hope to earn minutes at my club so that I can condition myself for October.

MF #7 SHIBASAKI Gaku (CD Leganes/Spain)
We showcased a poor performance that cost us the first match, so we were determined to redeem ourselves in this match. The intensity level we showed at the trainings were at a different level than when we were preparing ourselves for the match against Oman. I believe that we were able to showcase a strong mentality against China PR and build a positive momentum for the upcoming matches. I personally think that this was the minimum result to redeem our failure from the first match. Now that we have earned our first win, we must keep this going, otherwise it will be meaningless. The next two matches are going to be the turning point of the final round. We must not sit on our laurels and realise that we are still in a tough situation.

MF #14 ITO Junya (KRC Genk/Belgium)
I was facing the opponent one on one, so I focused on keeping my move simple to deliver the cross. Osako had been requesting for fast driven balls, so I am glad I was able to deliver just that. After dropping the first match, we were in a must win situation, so we are relieved for this victory. We found out prior to the match that our opponent was playing a five-back formation, so we communicated with each other to stay on the same page in terms of how we wanted to approach the match. We showed great transitions in defence, but it felt like we needed to raise the quality of our offence, so I will keep that in mind as I prepare myself ahead of our next matches.

FW #15 OSAKO Yuya (Vissel Kobe)
It was a tough match, especially when playing under the tension of the final round. After losing our first match, I am simply happy for today’s victory. We still have plenty of room for improvements, but we hope this will give us momentum ahead of our matches in October. Following our loss at the first match, we reminded ourselves that we need to be more determined to win through this competition, which helped us win today’s match. I focused on keeping my composure so that I can convert the opportunity when it comes. We have learned our lesson from the first match, so we hope to make the most of that experience and start racking up points.

LI Tie, Coach of China PR National Team
First of all, I would like to thank my players for their hard work and the fans for their support. The players made great adjustments despite the system change. By facing the top teams in Asia, we were able to see the difference in the speed and tempo of each play. I am sure that we can make the most of this experience to showcase a better performance in our next match.