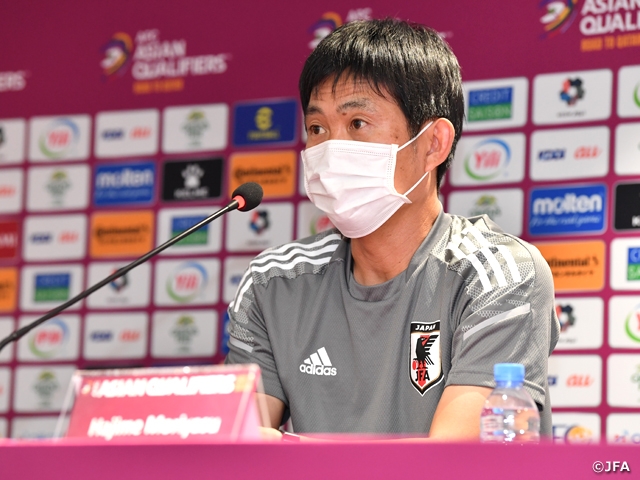 On Monday 6 September, one day ahead of the second fixture at the final round of the AFC Asian qualifiers (Road to Qatar) against the China PR National Team, coach MORIYASU Hajime of the SAMURAI BLUE (Japan National Team) appeared in the official press conference held at Khalifa International Stadium (Doha) and shared his aspiration, “We have prepared ourselves to earn three points. We will give our best efforts to win the match.”

Following their 0-1 loss to Oman on Thursday 2 September, Japan is currently in fourth place out of six teams in Group B. The team needs to finish within the top two spots in order to avoid the play-offs to qualify for the World Cup, making this a must win match for them to get back on track.

The team has arrived in Doha on Friday 3rd to prepare for this match, in which coach Moriyasu reflected, “The players have reset their minds to conduct very productive trainings. We are also seeing great improvements in their conditions.” The Japanese coach continued to share his take on the upcoming fixture, “We must learn from our mistakes and strive to showcase our best performance against China PR.”

China PR has advanced through the second round holding the best record among the second place teams. However, due to the ongoing spread of COVID-19, China PR is prohibited from holding matches in their home country forcing them to hold their home matches in Doha for the month of September. With Australia being in the same situation, the two sides squared off in Doha on Thursday, in which Australia won 3-0.

Despite losing their first match, the team has been training in Doha since late-August, allowing them to prepare for their second match against Japan without the hassle of travelling.

The last encounter between Japan and China PR came in the EAFF E-1 Football Championship 2019, in which Japan won 2-1. Japan also holds the advantage in overall record, with 13 wins, 7 draws, and 7 losses. However, in efforts to qualify for their first World Cup since 2002, China PR has acquired new talents through naturalisation over the recent years, making them a force to be reckoned with.

In their match against Australia, Brazilian-born ELKESON (also known as AI Kesen) and British-born Tyias BROWNING (also known as JIANG Guangtai) featured the starting line-up, while ALOISIO (also known as LUO Guofu) and ALAN were named on the bench. All four players currently play for Guangzhou FC and have shown their talents at the AFC Champions League (ACL).

In addition, China PR consists of players like WU Lei who currently plays for RCD Espanyol at the La Liga, and veteran defender YU Dabao who has plenty of international experience.

The team is led by coach LI Tie, who worked as an assistant coach under the tenure of coach Marcello LIPPI and took over the helm as an acting coach in 2019. The former defender of the China PR National Team shared his confidence ahead of the upcoming match, “Although Japan is a strong opponent, we are fully prepared for this match.”

When asked about China PR, coach Moriyasu shared his take, “They always had great potential. With the addition of the naturalised players, they have become a much stronger team.” The coach also added, “Our opponent will be thoroughly prepared for this match and challenge us with great intensity. We must put in the work to outperform our opponent.”

In Doha, the temperature rises over 40 degrees Celsius even after the sun goes down, but the match venue, which will be used at the World Cup, is equipped with a cooling system, which allows matches to be played even during the hot and humid season.

On this day, the SAMURAI BLUE held their official training session, in which the first 15 minutes was open to the media, as the team went through their warmup routines to start off the session, before covering their strategies and tactical plays behind closed doors. 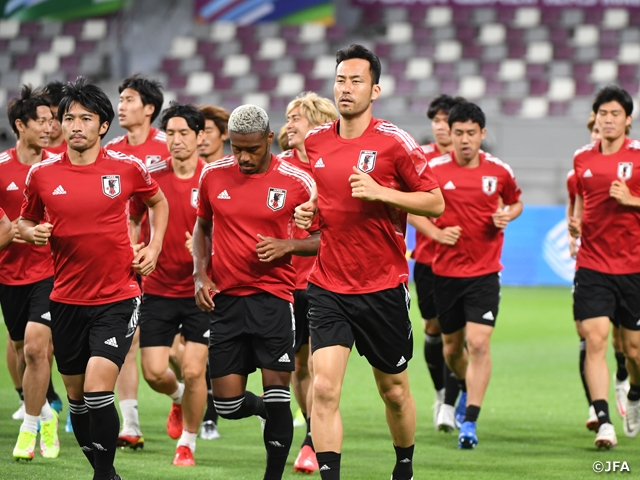 With the team in a must win situation, team captain YOSHIDA Maya (UC Sampdoria) shared his enthusiasm, “We seriously need to get fired up, and I hope we can switch on the ignition in the next match.” The veteran defender continued to comment, “We need to make sure that we pick up our pace and regain our usual performance to earn all three points. I believe that we can do it, so we are just going out there to win the match.”

The match between the SAMURAI BLUE and the China PR National Team is scheduled to kick off at 18:00 on Tuesday 7 September (00:00 on Wednesday 8 September, Japan time).

MORIYASU Hajime, Coach of SAMURAI BLUE (Japan National Team)
Ahead of our match against China PR, we have prepared ourselves by holding team meetings to go over our match against Oman, make necessary adjustments, and focus on what we have been working over the recent years. The players were distraught over the loss against Oman, but they have reset their minds and showcased great focus in the recent training sessions. As they increase their intensity level to build momentum ahead of the next match, I can really tell that they are striving to raise the quality of each play. In our match against Oman, it felt like we were outperformed by an opponent who came thoroughly prepared to play against us. That is why we need to enter our next match with a strong determination to win the match. China PR is a team with great individual talents. They are also capable to shifting their formation during the match depending on how their opponent approaches the match. In order to overwhelm such opponent, we must prepare ourselves with plenty of options.

DF #13 NAKAYAMA Yuta (PEC Zwolle/Netherlands)
All the players are feeling responsible for losing the first match at home, so we are fully determined to win our next match. Instead of worrying about the opponent, we must first focus on executing our own job. That was something we weren’t able to do in our first match, so we will try to go back to the basics and showcase our usual performance. Our result at the Olympics was disappointing, but it is giving me extra motivation to do well at the final round of the Asian qualifiers. If I am given the opportunity to play, I feel like I can help the team gain composure. If the younger players, including myself, can exert our power without knowing the fear of the final round, I think the Olympic generation can provide new options for the team. 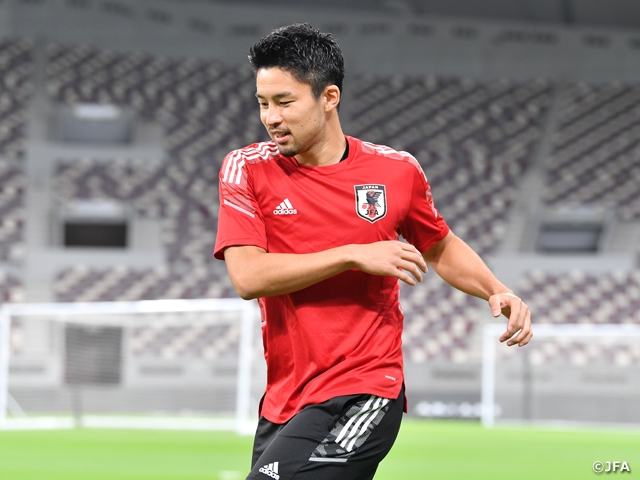 DF #22 YOSHIDA Maya (UC Sampdoria/Italy)
I want to become a player that can lead the team during difficult times, and I feel like my leadership is being tested. The team is facing a turning point, so I hope to guide the team to a better direction. After the first match, everyone's mentality definitely changed. The intensity level has risen at the training sessions and players are challenging themselves harder under the scorching weather. This is what we lacked in our first match. We are in great condition and the team is surrounded by a positive vibe right now. China PR did not utilise all of their naturalised players, but that might change in the next match. Even during tough times, the defence line must play with patience and keep their focus throughout the entire 90 minutes to prevent the opponent from creating opportunities from counterattacks.

MF #14 ITO Junya (KRC Genk/Belgium)
In our match against Oman, despite seeing our opponent setting a block in the centre, we had to be more aggressive in offence. I am in better condition than the first match and the team can no longer afford to lose another match, so we just need to reset our minds and focus on the match in front of us. Each match will lead us to the World Cup, and that can be said for our opponent as well. We do not want to experience that bitter feeling anymore, so we will fully prepare ourselves to win the next match. We have gone through the scouting reports of China PR, but we are not sure how they are going to approach this match against us. If they drop back, we need to penetrate the flanks. I wasn’t able to enter the box as often as I liked in our previous match, so I will be more aggressive to make runs into the box. 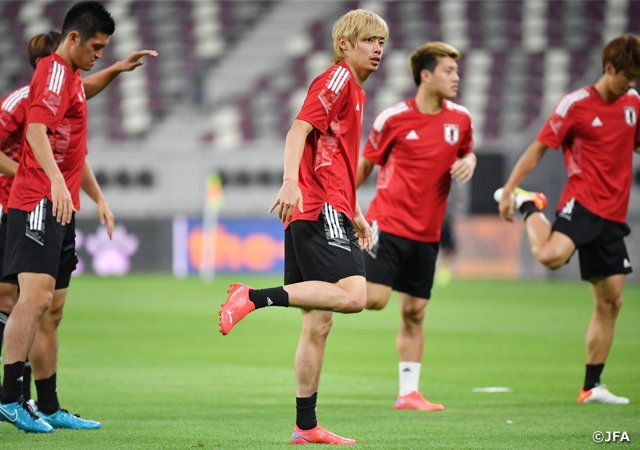 FW #10 ONAIWU Ado (Toulouse FC/France)
I am here as an additional call-up, and although I am not a super star, I am fully prepared through the matches I played with my club. The team is in a tough spot after losing the first match. It is not something I can change singlehandedly, but I am here to help the team win the next match. Number 10 is a special number, and I am honoured to be wearing that number tomorrow. I will try not to get overwhelmed and focus on showcasing my usual performance. My strength lies on my ability to score goals in the final third, so I will stay keen to score goals if I am given the opportunity to play. This team consists of many players who are capable of delivering quality crosses, so I will try to position myself where I can score goals and draw attention of the opposing defenders. We will give our best efforts to win the match tomorrow. 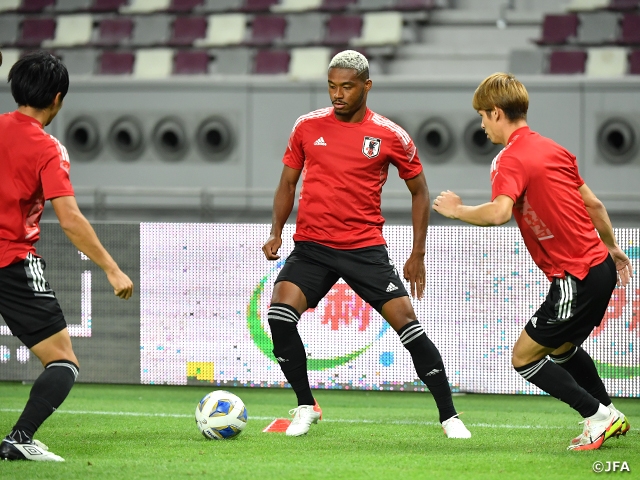 LI Tie, Coach of China PR National Team
Although there were only four days in between our first and second match, we have prepared ourselves for tomorrow’s match against Japan by reviewing the match against Australia. Both the players and the coaching staffs have reset their minds from the loss against Australia, and the team is in great condition. Japan is an extremely strong team, but I believe that we are fully prepared to face them. The team is full of confidence and ready to fight.