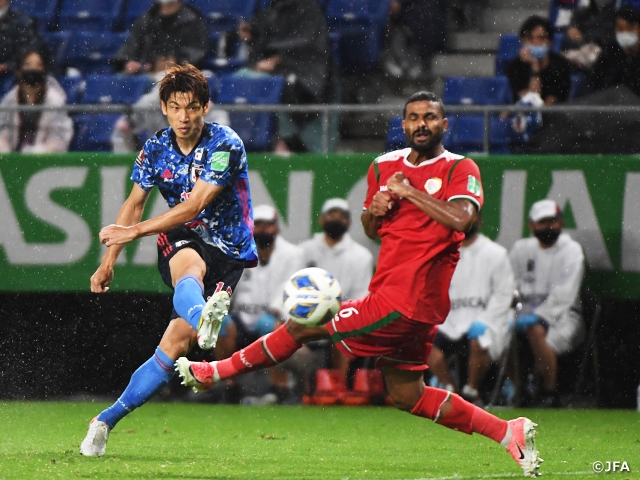 On Thursday 2 September, the SAMURAI BLUE (Japan National Team) played their first final round fixture of the FIFA World Cup Qatar 2022™ Asian qualifiers (Road to Qatar) against the Oman National Team at Suita City Football Stadium (Osaka). The team conceded the only goal of the match in the closing minutes, starting off the final round with a 0-1 loss. Japan will now face China PR at Doha on Tuesday 7 September. 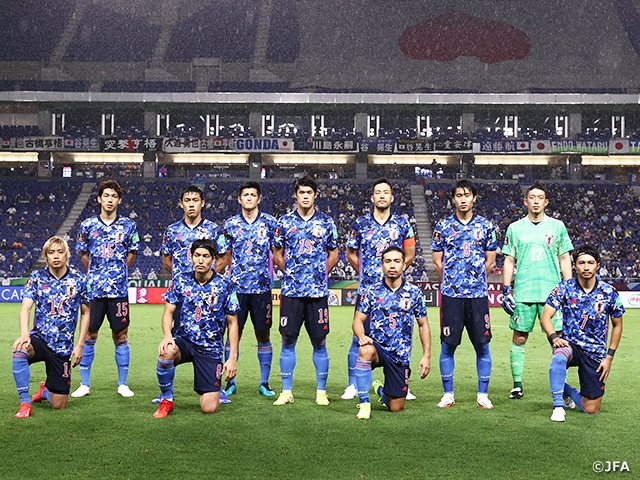 Led by coach Branko IVANKOVIC, who has previously led Iran to face Japan in the final qualification round of the 2006 FIFA World Cup, Oman showcased great aggression from the early minutes to take the initiative of the match. Playing under the pouring rain, Oman effectively utilised long balls to threaten the Japanese goal.

Despite the tenacious efforts showcased by their defence, Japan struggled to find their rhythm, as they committed uncharacteristic mistakes that interrupted their build-up plays. A close opportunity was created in the 27th minute, when Ito responded to a diagonal cross delivered into the box, but his shot was denied by the opposing goalkeeper.

After both sides ended the first half scoreless, it was once again Oman who took the initiative at the beginning of the second half. In the 50th minute, Nagatomo was called with a hand ball inside the Japanese penalty box, as the referee pointed for a PK. However after the play was reviewed by VAR (video assistant referee), the ruling on the pitch was overturned, leaving the Japanese players heaving a sigh of relief.

In efforts to change the dynamics of the match, Japan introduced FURUHASHI Kyogo (Celtic FC) to start the second half as the left winger. With Furuhashi revitalising the offence, the two full backs, Nagatomo and Sakai created opportunities with their crosses in the 48th and 55th minute respectively. Furuhashi also struck a shot in the 58th minute, but his attempt was blocked by the goalkeeper.

DOAN Ritsu (PSV Eindhoven) and KUBO Takefusa (RCD Mallorca) were brought into the match in the 63rd and 70th minute respectively, as they interacted with the over-age players of the Tokyo Olympic Team, Sakai and Endo, to build the offence in the right flank, but couldn’t create chances that would threaten the opposing goal.

The match entered the final minutes as if it was going to end in a scoreless draw, but the deadlock was broken in the 88th minute, when Oman’s Salaah Said AL YAHYAEI combined with Arshad Said AL ALAWI to break through the right side before sending a cross towards the box, allowing Issam Abdallah AL SABHI to redirect the ball into the Japanese goal. 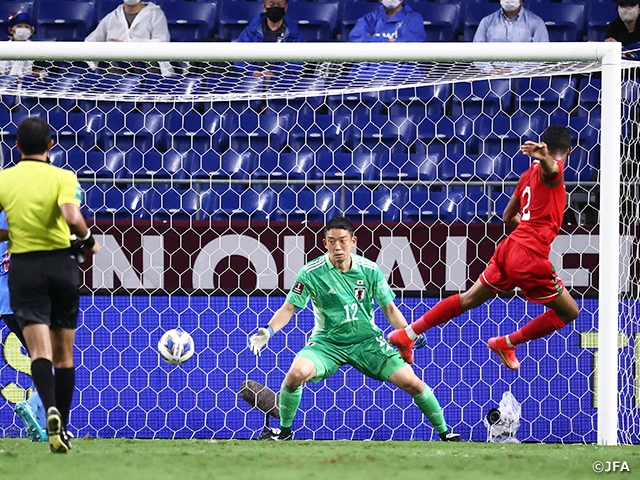 With time running out, Japan pushed up their centre back Yoshida to deploy their power play but fell short from scoring the equaliser, dropping the first match of the final round.

Following the match, the SAMURAI BLUE took a charter flight to Doha, where they will play their second fixture against the China PR National Team. However, it was announced that Sakai will not be traveling with the team, in order to manage his workload after he participated in the second round of the AFC qualifiers in late-May and the Tokyo Summer Olympics, while also playing for his club. The team will resume training in Doha on Friday 3 September. 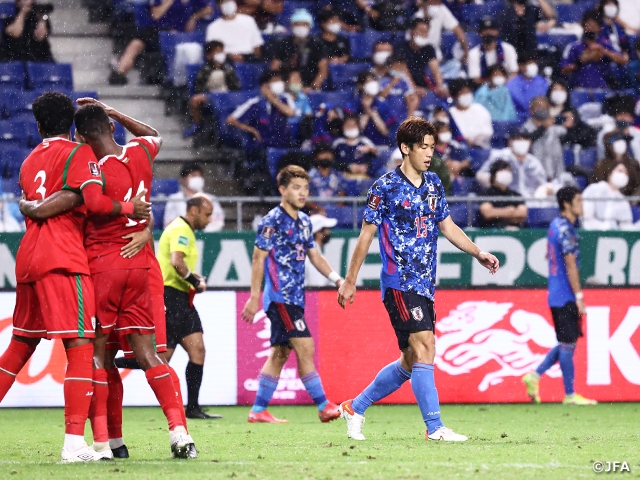 In the other fixtures played in Group B, Australia defeated China PR 3-0 at Doha, while Saudi Arabia won their home game against Vietnam 3-1. Three teams are tied with three points, with Australia having the advantage in goal difference. Japan is in fourth place with Vietnam and China PR trailing in goal difference.

Iran took the lead in Group A after winning their home game against Syria 1-0, while the fixtures between Korea Republic and Iraq, and UAE and Lebanon ended in scoreless draws.

The final round of the AFC qualifiers will take place until March 2022, with the top two teams of each group automatically qualifying for the FIFA World Cup Qatar 2022™, and the two third-placed teams competing in a single-match play-off to determine the qualifier for the inter-confederation play-offs. The FIFA World Cup Qatar 2022™ is scheduled to kick-off on 21 November 2022.

MORIYASU Hajime, Coach of SAMURAI BLUE (Japan National Team)
After mishandling the second ball, our attention was drawn towards the opponent’s side attack, which made us lose our balance and concede that goal. Winning the second ball was something we focused on entering the match, so after seeing our opponent dominating us in the first half, we made adjustments to win the second balls in the second half, but it ended up costing us a goal. With so many players joining from abroad, we were only able to hold one team session ahead of this match, but we cannot use that as an excuse. As the number of players playing abroad increased, the players have always strived to win even when given a short preparation period. I think our players were able to enter this final round with the determination to fight through the tough competition. They were also aware of the fact that we lost the first fixture of the final round in the previous World Cup as well, so they certainly gave their best effort to win this match.

There are many aspects we need to address from this match, but we must first redeem ourselves from this loss. While reflecting on the match, we hope to build a positive vibe heading into our next match against China PR. In today’s match, we struggled when the players were playing far away from each other. I think it is necessary for us to stay on the same page and keep a good distance between each other in both offence and defence. Under the given conditions, we need to demonstrate 100% of what we can do at that time, both individually and as a team, and try to win the match under any circumstance. We hope to make the most of this match and make the necessary adjustments so that we can win our next match.

DF #22 YOSHIDA Maya (UC Sampdoria/Italy)
At a minimum, we had to keep a clean sheet to secure a point at home. It is very frustrating that we couldn’t achieve that. I think our opponent was in great condition. They held a longer a training camp longer than usual and entered Japan earlier than we did, but we cannot use that as an excuse. We weren’t able to keep the ball moving in our rhythm. We lacked intensity and creativity, lost possession of the ball at bad timings, allowed our opponent to counter every time, and we were forced to build our offence deep in our own territory. Our tempo was off, kept awkward distance with each other, and were ineffective to mix the long balls and shorts balls. These things could happen in the first match of a competition, but we played too passively. Looking back on the scene when we conceded the goal, I had to position myself where I can close down the angle of the near side, while the players in the centre had to do a better job marking their man. I think we conceded that goal as a result of an accumulation of small mistakes. Similar to last time, we have put ourselves in a hole, so we just have to find a way to climb out of it. 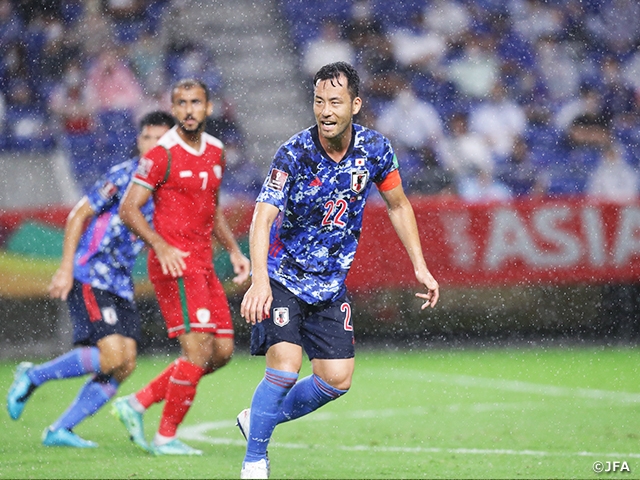 MF #6 ENDO Wataru (VfB Stuttgart/Germany)
There is no doubt that our opponent showcased a great performance, but our transitions were slow, and we made too many simple mistakes. In terms of the team’s offence, we could have made more attempts down the line so that we can earn more corner kicks or deliver more crosses. I think it is important that we give ourselves more time to prepare ourselves so that we can make better decisions and have more options. We must accept this result and move forward. Our next match is going to be an away match, but we will give our best effort to prepare ourselves in the best way possible. 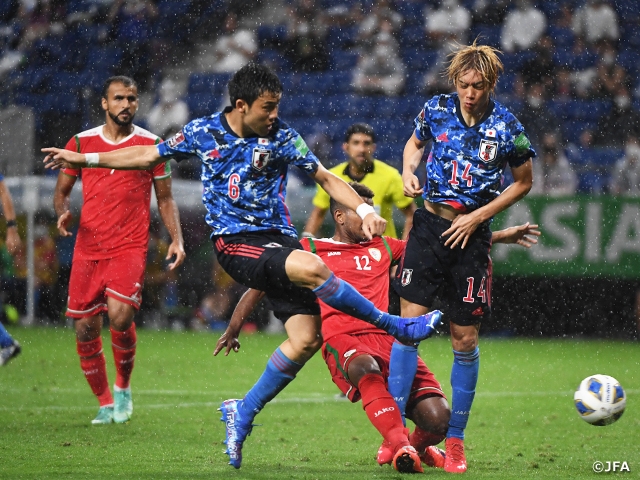 MF #14 ITO Junya (KRC Genk/Belgium)
Our overall performance was not great, and we made too many mistakes. Although we were able to possess the ball, we were not able to create effective attacks. (Reflecting on the opportunity he created) I am always anticipating to exploit the space behind the defenders. I was able to get in between the two defenders and although I was able to make good contact, the shot went straight to the goalkeeper. It goes without saying that Oman was in great form, but I still believe that we could have done a better job today. We need to react quicklier when losing possession of the ball and raise the quality of our plays in the final third. We must also focus on reducing the mistakes and try to raise the overall quality as a team. 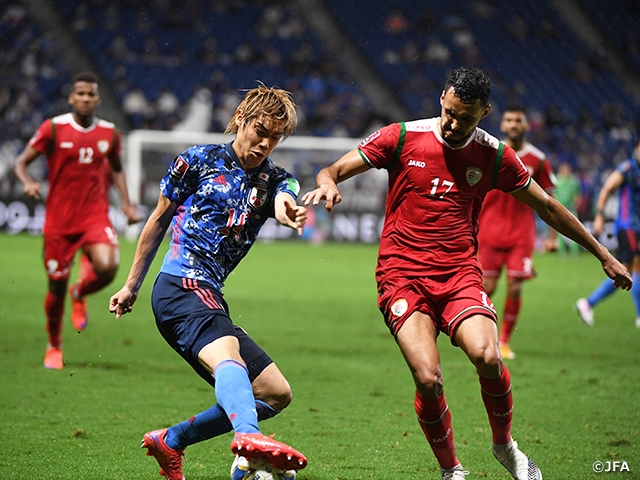 Branko IVANKOVIC, Coach of Oman National Team
I am overwhelmed by this historic victory. We took control over the match for the entire 90 minutes, created multiple opportunities that threatened the opposing goal, and showcased a performance worthy of a victory. We had been preparing ourselves through our training camp to cause an upset in this group and surprise Japan. The players played with great passion, and the Japanese players must have been surprised by our high-pressing approach. I am proud of my players for showing a big heart at the biggest stage. I am sure that the people of Oman are feeling excited and proud of this result that can lead to even greater things in the future.