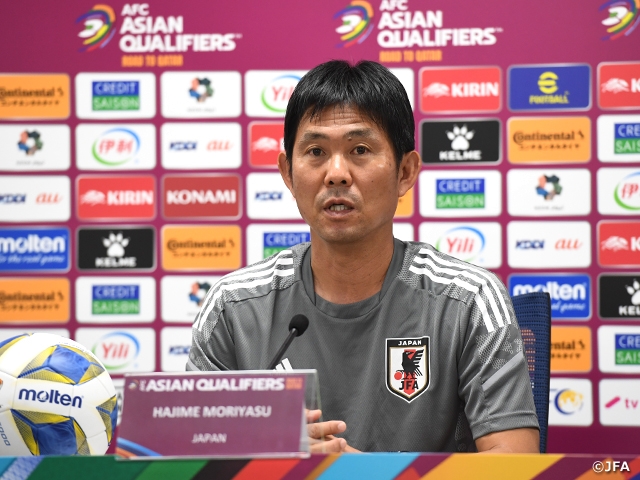 One day ahead of their first match of the final round of the FIFA World Cup Qatar 2022™ Asian qualifiers (Road to Qatar) against the Oman National Team, the SAMURAI BLUE (Japan National Team) held an official training session at the match venue, Suita City Football Stadium (Osaka), on Wednesday 1 September. Coach MORIYASU Hajime appeared in an online press conference, which was also held on this day, to share his aspiration for the match, “We will prepare ourselves in the best way possible and strive for victory as a team.”

With the team aiming for their seventh consecutive World Cup appearance, the squad took the pitch of Suita City Football Stadium, as OSAKO Yuya (Vissel Kobe), SHIBASAKI Gaku (CD Leganes), YOSHIDA Maya (UC Sampdoria), and KUBO Takefusa (RCD Mallorca) were seen going through their warmup routines before going into more detailed drills to prepare for the match. The three goalkeepers, KAWASHIMA Eiji (RC Strasbourg), GONDA Shuichi (Shimizu S-Pulse), and TANI Kosei (Shonan Bellmare) were seen going through a separate set of menus to work on their catching and saving skills. 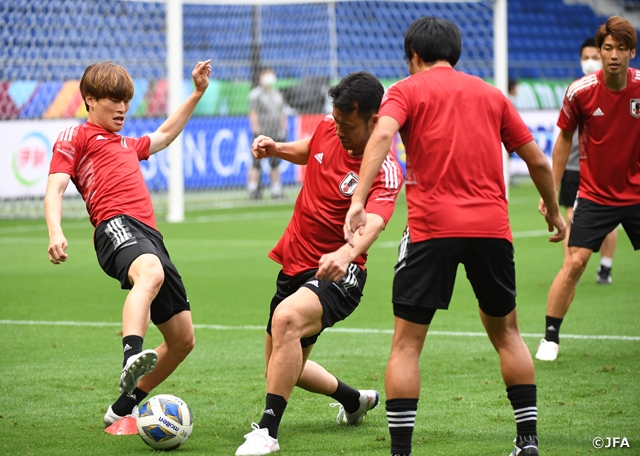 MINAMINO Takumi (Liverpool FC) and ITAKURA Kou (FC Schalke 04) did not participate in the training session due to injury, and it was announced in the evening that SHOJI Gen (Gamba Osaka) will replace the roster spot of Itakura. Shoji has returned to the squad since he was called up for the second round of the Asian qualifiers in June, as he joined the team immediately following a cup match played for his club.

The twelve teams that advanced from the second round are divided into two groups of six teams to play home-and-away round-robin matches. Japan is placed in Group B, where they will compete against Oman, China PR, Australia, Saudi Arabia, and Vietnam for September to March. The top two teams of each group will automatically qualify for the FIFA World Cup Qatar 2022™, and the two third-placed teams will compete in a single-match play-off to determine the qualifier for the inter-confederation play-offs.

With the team entering the final round, coach Moriyasu shared his take on the competition, “We need to find ways to overwhelm opponents who are fully prepared to play against us. It will be a very difficult battle.”

Japan will open up the action with a home game against Oman, who they hold an undefeated record of nine wins and three draws in past matchups, with their last encounter coming at the AFC Asian Cup 2019, in which Japan won 1-0. Oman is ranked 79th in the FIFA ranking, while Japan currently sits at 24th.

However, since coach Branko IVANKOVIC took over the helm in 2020, the team has shown great growth, as they finished the second round with a record of six wins and two losses, and the team is coming off a month-long training camp held in Serbia. The Croatian coach, who has faced Japan in the past as the coach of Iran National Team, shared his confidence at the official press conference, “We were able to hold a wonderful training camp. We are fully prepared ahead of the big match against Japan.”

When asked about their Oman, coach Moriyasu mentioned, “They are a very attack-minded team, who have a wide range of strategies. We must play with patience and make persistent efforts in offence.”

Last time Japan entered the final round of the Asian qualifiers, they lost to UAE in their first match, as coach Moriyasu commented on their approach heading into the competition, “Regardless of the size of the competition, the first match is always hard. There will be lots of pressure on the players, but I want them to play with confidence and showcase what they have been working on in a daily basis.”

Ahead of the match, the players’ jersey numbers were announced. Tani, who made his first call-up to the SAMURAI BLUE after thriving at the Tokyo Olympics, was given #23, while FURUHASHI Kyogo (Celtic FC) received #18. Shibasaki, who is making his return to the national team since last November, was given his usual #7, while Kubo and DOAN Ritsu (PSV Eindhoven) were given #17 and #11 respectively.

With the first match just around the corner, Shibasaki shared his aspiration, “The first match is going to be a very important match for us. In order to qualify for the World Cup, we must stay focused and showcase a solid performance from the first match.” 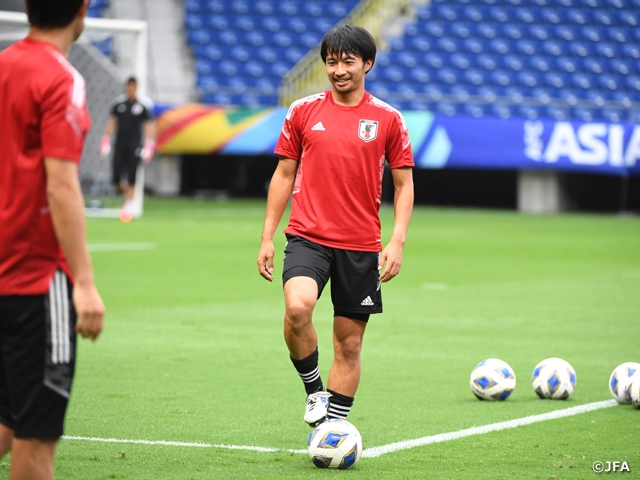 The match between the SAMURAI BLUE and the Oman National Team is scheduled to kick-off at 19:10 on Thursday 2 September at Suita City Football Stadium.

MORIYASU Hajime, Coach of SAMURAI BLUE (Japan National Team)
There is no silver bullet to win through the final round. It is important that we focus on executing our job even against tough opponents, stay flexible when facing adversities, and stay on the same page as a team. Oman is capable of deploying a wide range of strategies depending on their opponent and the flow of the game. They will apply numbers upfront to add layers to their offence, while constructing a solid block in defence. Facing an opponent like Oman, we must keep the ball moving, play with patience, and anticipate for the opportunities. In order to showcase what we have been working on, we will prepare ourselves in the best way possible and strive for a victory as a team.

Some of our players may lack the experience of playing in the final round, but no one is experienced from the beginning, and we have plenty of players who have the experience, so I am not worried. There will be lots of pressure on the players, but I want them to play with confidence realising that they are here because they have been showcasing their abilities at a daily basis. We hope to develop the team through the competition while earning results.

I am sure there are unexpected events waiting ahead of us with the ongoing situation with COVID-19, schedule conflict with clubs, injuries, and suspensions, but we will continue to give our best efforts to win the match in front of us. We will strive to become a team that can earn results regardless of who is on the pitch.

We would like to express our gratitude towards all the people who has supported us through the corona-pandemic and enter the match acknowledging how fortunate we are to be playing football under this circumstance. We hope to showcase a performance that can deliver energy, courage, a victory to those who are affected by the corona-pandemic and other natural disasters.

DF #22 YOSHIDA Maya (UC Sampdoria/Italy)
The competition level at the final round will be vastly different from the previous round, and the matches will be much tighter. It is important that each player is striving to reach a higher level at their respective clubs and join the national team in good condition. The team must also raise the overall level through the qualifiers. Last time we played in the final round, we found ourselves in a hole after playing the first match. We must be extra careful when playing an away match and acknowledge that strategies will vary depending on home or away, climate, travel time, and other aspects. It is essential to make adjustment for each match. Many players have been involved since this team was launched, but we have been playing with the same philosophy all along, so we are capable of staying on the sage page regardless of who is on the pitch. The players of the Olympic generation brought new competition to the team, which is allowing us to raise the level of the team. We will see how many of them can stick to the senior squad and compete at the World Cup. In that sense, the Olympics is not over yet.

MF #7 SHIBASAKI Gaku (CD Leganes/Spain)
We must enter with the expectation that the competition level will be much higher at the final round. Looking back on the Asian Cup, Oman was not an easy opponent to face. We don’t have enough information about our opponent, so we need to scout how they play in the early minutes of the match, but the most important thing is that we showcase the football style we have built over the years. Many players have newly joined the national team while I was gone, which brought new competition and a wider range of versatility. It gives us a sense of confidence that we can compete with different line-ups and matchups, so we hope to broaden and strengthen our options through this qualifier. I think our ability to play collectively is going to be the most important aspect at this competition.

MF #10 MINAMINO Takumi (Liverpool FC/England)
This is going to be my first time competing in the final round, and I am aware of the significance of the first match. With the match being played at home, this is a match we cannot afford to lose. Each win is going to have great significance from here on, so we must prioritise winning matches more than ever. From my experience playing in the under-age categories, I have the impression that the competition at the final round of the Asian qualifiers is extremely tough. We hope to showcase a performance that can prove that we are the best team in Asia, but more than anything, we must focus on each of the match in front of us. We don’t want to rush our plays or lose our balance from mistakes, but an early goal can help stabilise the defence line and give the team a chance to manage the game easier. The weight of a single goal is much more significant at the final round, so while keeping the balance of the team, the attacking players must stay keen to score the opening goal.

MF #11 DOAN Ritsu (PSV Eindhoven/Netherlands)
I knew that I had to reset my mind following the Olympics, so that is what I focused the most during the first two to three weeks after I joined my club. I think our opponents are going to be playing with a totally different mentality at the final round. With the ticket to the World Cup at stake, there will be no easy matches, and the pressure is going to enormous. As an attacker, earning results that can contribute to the team’s victory is the most important thing, and that is an aspect I lacked at the Olympics. I will give my best utmost efforts to win a starting position at the senior squad and try to earn as many minutes as possible. 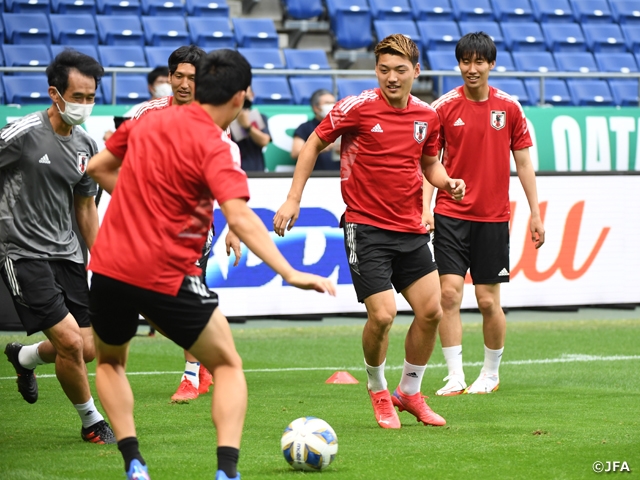 Branko IVANKOVIC, Coach of Oman National Team
This match against the Japan National Team, who has participated in the previous World Cup, is a very exciting and extremely important match for us. Japan consists of many players who plays in Europe, and they are one of the best teams in Asia. With their roster depth, they can line-up a strong team regardless of who is on the pitch. We were able to thoroughly prepare ourselves through the month-long training camp. Despite missing some players due to injuries, we will give our best efforts to earn a positive result. I want my players to showcase a strong performance while enjoying the match.