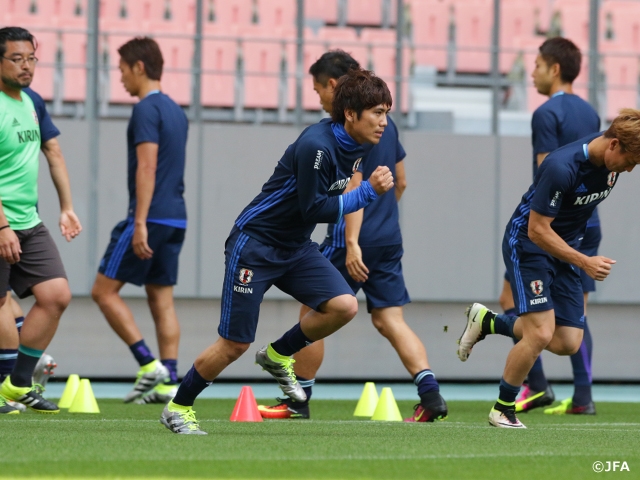 SAMURAI BLUE (Japan National Team) had a training session on Tuesday 31 May at the KIRIN CUP SOCCER 2016's match site Toyota Stadium in the run-up to the first match against Bulgaria to be held on 3 June.

The two-hour practice started in the evening as the strong early summer sun was going down. The squad loosened their body with running and fitness training before going through tactics with doors closed to media. Forward HONDA Keisuke (AC Milan), who felt uneasiness in his left ham, did not join the session and separately worked out.

Toyota Stadium is the place where midfielder KAGAWA Shinji (Borussia Dortmund) made his international debut in the KIRIN CUP 2008. Kagawa, having scored 25 goals in his 79 appearances so far, says, "It's a good memory, but now is more important. I will make best possible preparation and go out to win,"

"We don't know who will play yet, but I will try to take advantage of my strength and have got to be aware of what our coach expects us to do like moving behind players and restarting after laying the ball off," says Midfielder KIYOTAKE Hiroshi (Hannover 96). "We will try to finish with two wins." 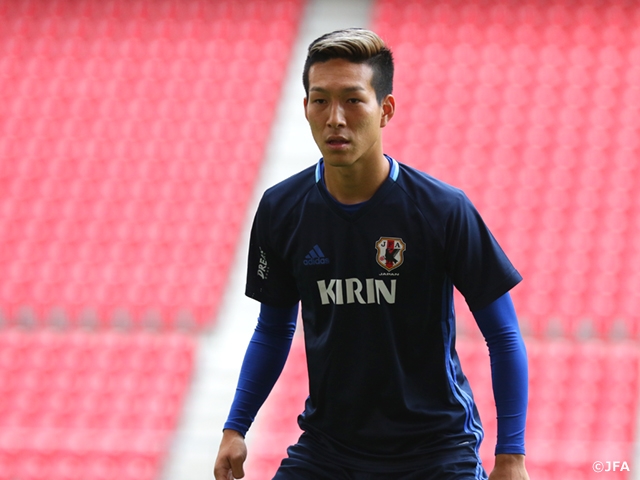 Endo says, "As bringing out my strength, I want to build a good working relationship with my teammates."

In addition to Japan and Bulgaria, Bosnia Herzegovina and Denmark will compete in the KIRIN CUP in a knockout system. The results of the match between Japan and Bulgaria and the other side of the match to be held on Friday 3 will determine pairings of the final and third-place match taking place on Tuesday 7 at Suita City Stadium in Osaka.

The match between Bosnia and Herzegovina and Denmark is scheduled to kick off at 16:00 on Friday 3 June, while Japan's match against Bulgaria is set to kick off at 19:30 on the same day. 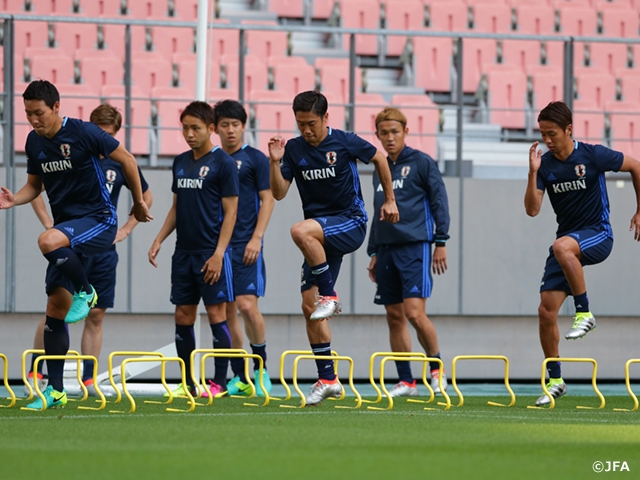 MF #10  KAGAWA Shinji (Borussia Dortmund/Germany)
Even though players playing together with me change, we need to play our game and get a win, and we also can show something different (depending on who gets to play). Everyone has quality. As a player playing at centre, I will try to take advantage of that and, at the same time, always be aware to let them take advantage of me. And hopefully we all let each other bring out our strength. Whoever plays, you need to show something high-level and actually prove that we can play. And even if you play against strong teams or go to the World Cup, it means nothing  if you end up in saying "we couldn't do anything because we got injured players." Every one of us got to be aware of that.

FW #24  KOBAYASHI Yu (Kawasaki Frontale)
(Because he was called up for the first time since March's camp where he left the team halfway due to injury,) I'm really happy to be here. And I'm ready to go out so far. There are a lot of good players, so I need to show something different that only I have. I've never played against European teams, so I don't feel any pressure. My strength is to find space behind defenders even if they create a defensive block. I will try to start communicating with passers during training.

MF #3  ENDO Wataru (Urawa Reds)
There is no big difference between the Olympic team and this team in fundamental stuff like how to win the ball, shift between offence and defence and put pressure and where to create a defensive block. But the players are different, so we need to try to take advantage of each player's strength. I'm not a player at all with a starting position guaranteed. I've got to focus on my play and hopefully build a good relationship with players around me while bringing out my strength.

MF #13  KIYOTAKE Hiroshi (Hannover 96/Germany)
I'm looking forward to playing against non-Asian opponents this time. (Asked about Honda working out separately) It’s just that the players who are on the pitch need to show what they are. It's not good to lose your competitiveness when your players switch. And whoever plays, you need to keep up showing the same high level of performance. As for the defence our coach expects from us, you can do the zone defence to some extent if you use your brain. But when it comes to intensity on the ball in duel or 1-on-1 situations, you've got to practise them in your daily training. I will try to be aware of that in the training.