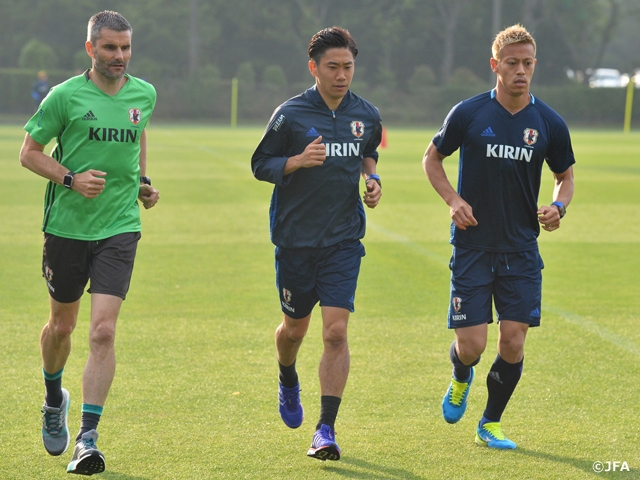 SAMURAI BLUE started practicing on Tuesday 24 May in preparation for the KIRIN CUP SOCCER 2016. The team had to hold a morning session on Friday 27 May despite the poor condition of the pitch due to rain, which had continued since the night before. The players worked hard on both the physical and technical aspects of their game in the rain.

Both HONDA Keisuke and KAGAWA Shinji joined the team at noon to attend the afternoon session. ASANO Takuma, who had taken part in the 44th Toulon Tournament, also joined the practice after returning to Japan. OKAZAKI Shinji and HARAGUCHI Genki, in addition to these three players, attended a practice session, as the others, who had been in training since the first day, had a rest in the afternoon.

The coach HALILHODZIC stayed as enthusiastic as ever despite the number of players on the pitch. He instructed the players energetically, including the occasional demonstration. 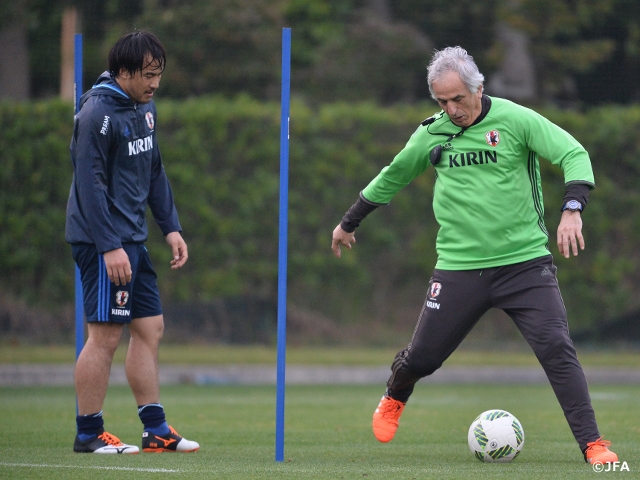 With only a few days to go before the first game of the KIRIN CUP SOCCER 2016 against the Bulgaria National Team, SAMURAI BLUE will continue to practice to improve themselves in every aspect.

HONDA Keisuke (AC Milan/Italy)
Both the coach and the players are aware that the two coming matches of the KIRIN CUP SOCCER are really vital. We are focused on winning. We aim in the same direction as the coach has shown us. I’d like to take risks in areas that I don’t usually try, without a fear of failure, while playing combinations and communicating with lots of players.

KAGAWA Shinji (Borussia Dortmund/Germany)
I’d like to prepare well to win the two coming games in the KIRIN CUP SOCCER. It’s up to how much we can improve our condition in a few days. So I’d like to focus on that. As we’ll also participate in the final qualifying round, I’d like play with high spirit to learn from this championship, and improve any problems we found in the coming matches.